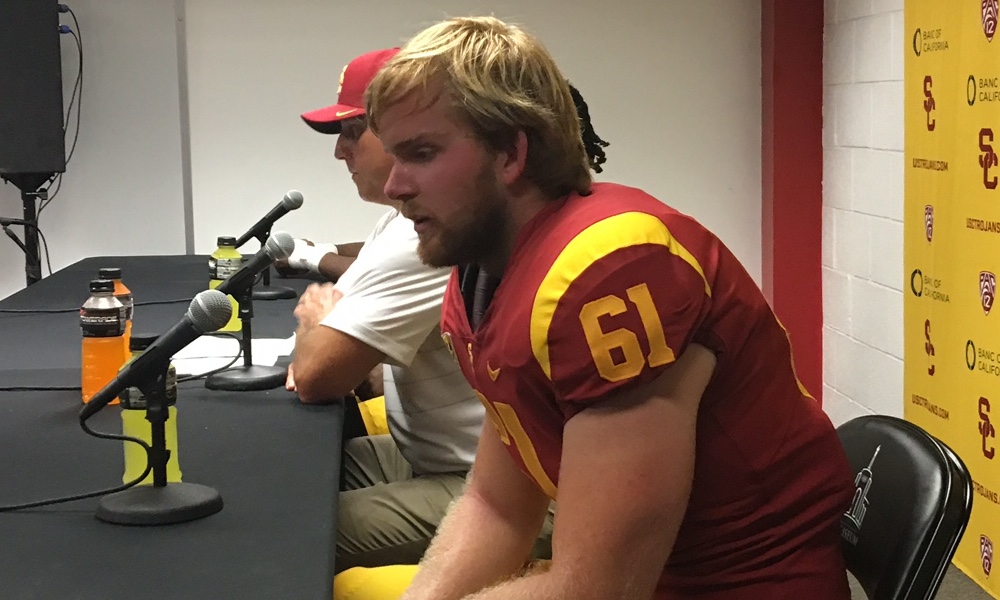 It was a moment that all USC fans had hoped would happen at some point.

Jake Olson, the blind long snapper who has been around the USC football program for close to a decade (first as a fan and now as a player) had a chance to enter the game in the fourth quarter and he executed a perfect center snap after a Marvel Tell touchdown. His USC teammates celebrated, the Western Michigan opponents patted him on the back and the Coliseum crowd cheered loudly.

On getting the opportunity to play: “It was awesome, it was something we’ve worked hard at. It’s an operation. From a holder making sure I line up straight, it creates a lot of trust. The whole game is about trust, but specially in that play. I love being out there, it was an awesome feeling. Something that I’ll remember forever. Getting to snap at USC as a football player is… I can’t quite believe it yet.

“Coach talked to me throughout the week saying that if the opportunity presented itself we’d be all systems go. Credit to Western Michigan gave us a hell of a game. Thanks to Marvell for that pick-6, and sure enough, coach was like ‘Are you ready, let’s get this done.’ It was a beautiful moment.”

On the emotions of walking on the field: “I tried to suppress my emotions because I had a job to do out there. I’ll check out the videos tonight and get emotional about it. It was very special, hearing my name called over the PA system. We always say we’re a family, Coach Helton says that. Being out there knowing I had the support of my team and the love I got out there. That really touches me. To see how many guys embraced and love me. When I ran out there it took away my nerves because I had guys loving and supporting me.”

On if there were any surprising sensations: “The quickness of it. Wyatt told me to put my hands on the ball and called the cadence right away. There wasn’t much time to think about anything. As soon as the ref backed up it was go time. Western Michigan was awesome; they didn’t try get in my ear and try to mess me up, they were really respectful and it was awesome.”

On if this experience brought him full-circle: “I just think there’s a beauty in it. If you can’t see how God works things out, then I think you’re the blind one. I think to have a situation where a 12 year old kid loses his sight and going to have to face the rest of his life without seeing is just ugly, and to fast forward eight years and have that same kid be able to snap on the football field that really got him through that time, is just really just special and incredible and I just want to thank everyone a part of it. I’m honored that I was part of God’s plan in that way of Him getting me out here and inspiring thousands of people just through this whole experience.”

“What a pressure player.  We’re going to try as often as we can to allow Jake to settle. Hopefully it wasn’t a one-time event. I’m very proud of him. He’s put a ton of work in. To see him execute in that moment, is what being a player is all about. He produced for his team and his family.  I commend and thank Coach Lester and the Western Michigan family to give us the honor of getting a special person, Jake Olson, in, giving us some time to line that play for Jake and execute that. Just the sportsmanship they showed Jake in patting him on the head. Great respect for Tim Lester and his program.”

This is anything but a regular PAT.

Jake Olson, blind since age 12, just snapped for the first time in a live game. https://t.co/amyHcFoVue