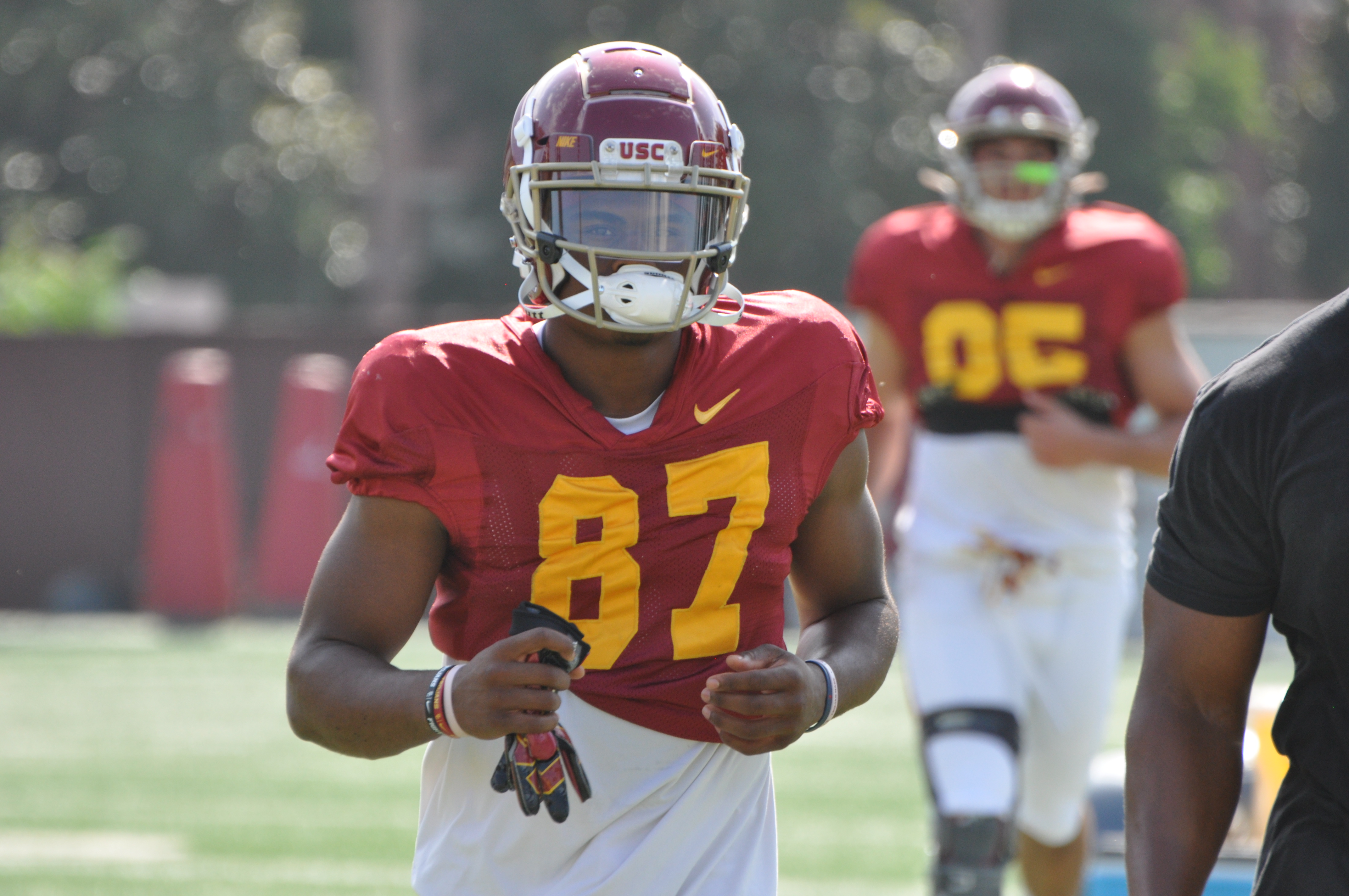 What will be the most feel-good moment of USC’s 2019 football season wasn’t supposed to happen.

John Jackson III wasn’t going to be able to play college football at USC, his father’s alma mater, as a scholarship offer to join the Trojans as part of the 2018 recruiting class never came. Still, he wasn’t going to lose an opportunity to play at his dream school.

His dad, John Jackson II—known fondly by all as JJ—wasn’t sure he was going to be able to fully recover from a massive and life-threatening stroke that left him unable to walk and his left side nearly paralyzed. But he wasn’t going to lose the ability to get back the life he so loved, as husband, father, and beloved Trojans radio voice.

For both, the animus toward losing has them on track for a powerful moment—which USC fans will undoubtedly cherish—when Jackson III inevitably makes his first catch as a Trojan, with his dad cheering him on.

“My mom used to always tell me I was a poor loser, but I think it was probably one of my best traits,” JJ said. “Because I hated to lose at anything—even the coin toss.”

He said his son possesses that same trait, and it’s one of the things that helped lead the younger Jackson to USC. Originally a member of the 2018 high school recruiting class, Jackson was offered an opportunity to greyshirt—attend junior college part-time and then enroll the following semester—if he wanted to play football at USC.

Jackson III jumped at the chance. Despite being sandwiched between a pair of five-star signees in the 2018 class and what wound up being a quartet of higher-ranked receivers in 2019 class, including two more five-star prospects, Jackson III was unflinching in his drive to play for the Trojans. He was ranked as the 94th best wide receiver and 563rd best prospect in the country for his class.

“I told him you’re going to have to prove it to everybody, because nobody thinks you can do it except for you and me,” JJ said. “He wasn’t a five-star, top-10 in the country recruit. The only way you’re going to change their mind is to do it over and over again.”

“Even as his dad, I was surprised,” JJ said of how hard his son worked to get himself ready. “He was diligent about the workouts. You can tell. If somebody wants something, they’re going to do it. But if it’s lip service, they can say they want it, but they don’t work at it.”

JJ made sure that his son knew he wasn’t pushing him toward USC, saying that “this SC choice was 100% his.”

“I told him, ‘You have to make this choice. Because if I make it for you, at the end of the day, it’s going to have to be you doing the work.”

Once the choice was made, it was fun to imagine JJ on the USC sidelines, balancing his career as the Trojans’ radio sideline play-by-play announcer, with his passion as a father and Jackson III’s lifelong football coach. But those images began to flicker with the news of JJ’s stroke this past December.

Now, nearly nine months later, the younger Jackson stands as one of USC’s most intriguing newcomers, a true freshman receiver who had a dominant spring ball and continued that momentum into the fall. He overcame a recent hamstring injury and appears poised to begin the season as a vital cog in the Trojans’ Air Raid offense.

The son is bigger and better able to withstand contact from cornerbacks than his father was at USC, where he caught 163 passes for 2,109 yards and 17 touchdowns during his time as a Trojan. JJ knows his son will get plenty of coaching from the Trojans offensive staff, so he’s doing his best to make the transition from coach—where he served throughout Jackson III’s pop warner career—to dad. But he admits that his best in this aspect isn’t up to the standard of his best in other areas.

“The big thing for me is to let him do it, so I’m trying my best,” JJ said. “I don’t know how that’s going to work out because I get caught every once in a while wanting to coach him or call him to say, ‘You have to do this, or have to do that.’ I try to be more positive because I don’t want to drive him away from me. I try to support him with what he needs.”

And this past week, there was JJ. Standing. Walking. Making his way onto the USC practice field to watch his son play for the first time in cardinal and gold.

“As a dad, of course I was proud,” JJ said. “It was sort of like déjà vu. I really couldn’t believe it. Every dad wants their kid to be like them, but the hard part is letting them do it.”

It was a big deal that JJ could make the visit to the practice field, as he received warm wishes from every media member in attendance and a long embrace from head coach Clay Helton. But while each milestone is met by fanfare from those outside, JJ isn’t looking to celebrate what’s now different about his life.

Jackson III said having his father out on the field was plenty emotional.

“For me, it was incredible,” he said. “That first day when I came out here…this is what I’ve been wanting to do my whole life, since I was born. He wasn’t out here of course, but now that he’s out here, it’s kind of like that first day feeling again, where he was able to see me and be proud of me. It means a lot to me.”

Pride is pushing both Jacksons on their respective paths, though neither is ultimately focused on himself. Hard work and overcoming obstacles have been a consistent theme for father and son, and both find plenty of reasons to continue pushing for each other.

“Hopefully when we go out to that Coliseum,” Jackson III said, “I can do something that makes him proud.”

“The shoe’s on the other foot a little bit,” JJ said. “I’m a dad trying to make my son proud. I’m proud of him no matter what. He’s good enough to get to USC. That’s a huge deal. Now, to get to that level where I’m making him proud. Oh my God, life would be complete.”