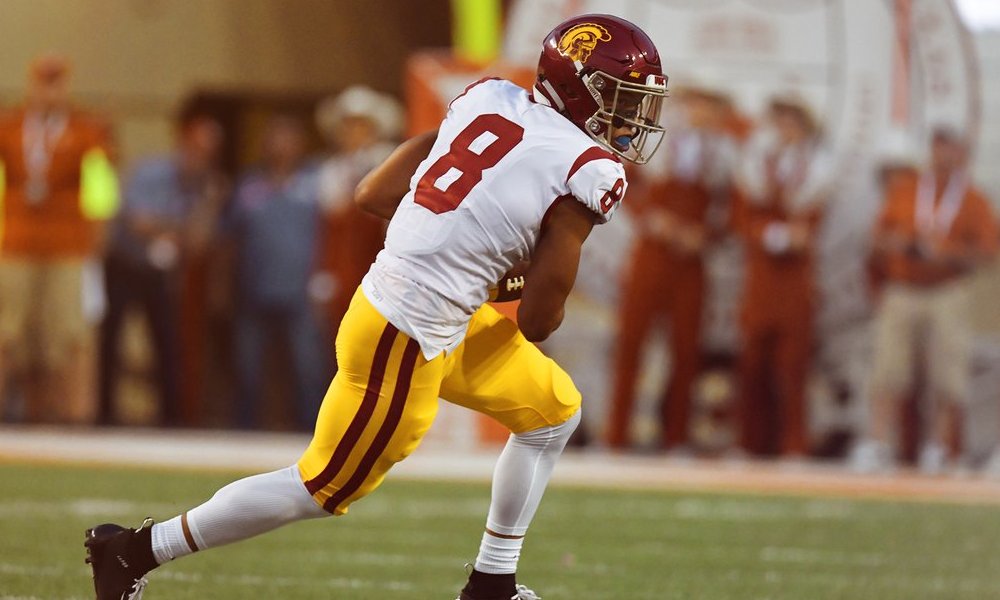 It started off so promising.

The opening series for the Trojans was a 9-play, 75-yard drive that resulted in a Stephen Carr 23-yard touchdown run to take a 7-0 lead. Two series later it was an 8-play, 53-yard drive that included a 40-yard toss from J.T. Daniels to Velus Jones and finished with a short Vavae Malepeai touchdown run to make it a 14-3 lead at the end of the first quarter. For a USC team that had been having issues scoring touchdowns, and getting the run game going, it couldn’t have started much better.

The Texas offense had put up 3 points but the USC defense was doing a good job of coming up with some big plays; a open field tackle by Marvell Tell at the 3-yard line to force the field goal, a pass break-up by John Houston on another 3rd down stop, and an Isaiah Langley pass break-up to open the 2nd quarter. The Longhorns really had no momentum going until Ajene Harris missed on a tackle attempt after a reception by Lil’Jordan Humphrey, who proceeded to go 47 yards for a touchdown to make it 14-10. And then things really turned.

USC quarterback J.T. Daniels tried to throw it up for Amon-Ra St. Brown but the ball was intercepted and converted to a field goal, 14-13 Trojans. On the next possession the Trojans got down into the red zone again and it looked to all the world like another score was on the way. USC even went under center with two run plays, one inside and one outside. Neither one worked. Incredibly, the 2nd run came after Texas coach Tom Herman declined a penalty that would have moved USC back, he was willing to take his chances that the Trojans couldn’t punch it in from the 3, and he was right.

Then came the safety, well, the safety that wasn’t called. The Trojans certainly looked to get Longhorn QB Sam Ehlinger down in the end zone but the officials ruled that it wasn’t a safety, and Texas prepared to punt the football, only to have USC freshman Talanoa Hufanga come in and get called for roughing the punter. It was roughing, you don’t want to blame Talanoa because he was so close to the block but it also was a situation that called for caution with the probability of getting the ball back in good field position. As it turned out, the teams did trade punts after that but the punt from Chris Tilbey was one of multiple shanks on the night and Texas got good enough field position that they were able to drive for a field goal before half to head into the locker room with a 16-14 lead.

As it turned out, that was about it for the USC highlights in the game. Texas scored touchdowns on three of four possessions to open the third quarter, which provided the eventual scoring margin of 37-14. The Trojans basically abandoned the run in the second half while trying to play catch-up and ended up running the ball 16 times (for -5 yards) compared to 48 passes from Daniels, not exactly the balanced offensive attack that Clay Helton said was the USC game plan.

As for Daniels, Helton said he grew up in this game and I understand what he meant. J.T. was under pressure most of the night (he was sacked three times) and he obviously didn’t have much of a run game to support him. Yet he completed 30 of those 48 passes for 322 yards. Daniels was not the problem tonight for the Trojans. Yes, it’s notable that he’s gone two games in a row without a touchdown pass but I doubt that will be the case too often in his USC career. His longtime receiver going back to Mater Dei, Amon-Ra St. Brown, put up 9 catches for 167 yards, in another impressive performance while the three other leading receivers for USC (Velus Jones, Tyler Vaughns and Michael Pittman) each had four catches for a combined 123 yards, respectable numbers but not enough to get it done on this day.

What J.T. and the USC offense need, more than anything, is some kind of commitment to the run, or ability to run the ball behind an offensive line that had trouble once again. We talked earlier about Helton’s desire for balance but in the first half when things were under control for the Trojans for much of the time it was an 11 run, 27 pass imbalance. That’s not something the opponent forced you to do, that’s a choice in play calling when you were dictating the pace of the game, and it played a big role in suffering a lopsided defeat for the second week in a row.

The critics will be out for Clay Helton and his staff this week and deservedly so. Most every Trojan fan accepted that these two road trips against Stanford and Texas would be challenging, and a 2-1 start was certainly possible, while a 1-2 start with a true freshman QB was also a possibility. But it’s not the QB who has the Trojans at 1-2, the blame lies mostly with a coaching staff that just isn’t doing right by the players, certainly not on this night in Austin.