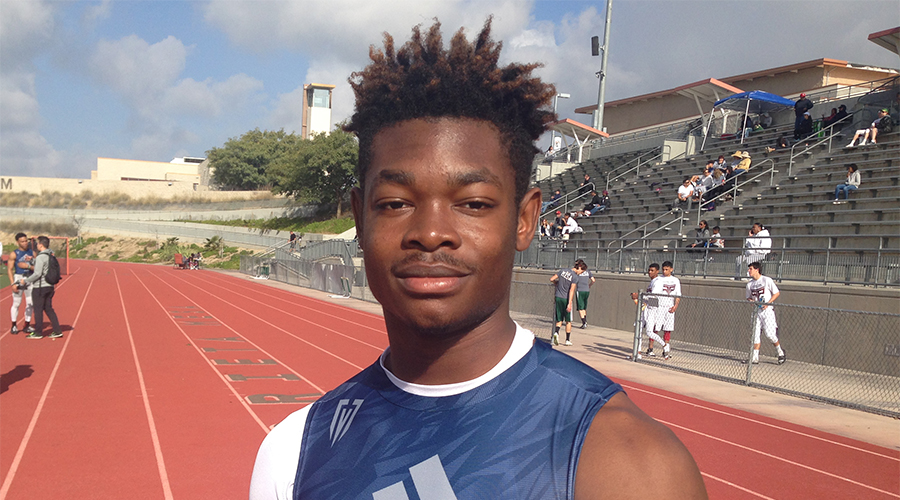 Arguably the top cornerback prospect in the western region for the Class of 2018, San Diego (Calif.) Saint Augustine’s Isaac Taylor-Stuart shined this past weekend at the King of the I.E. 7-on-7 Tournament in Murrieta, California. Playing for a Premium Sports team that wound up winning the event, he locked down receiver after receiver, showcasing outstanding speed and instincts to go along with the 6-foot-2, 188-pound size that he brings to the table.

Not surprisingly, his offer sheet has continued to grow on an almost weekly basis this offseason, with Cal and BYU serving as two of the most recent programs to throw their hat in the ring, joining well over 20 other programs.

Of that group, a handful of powerhouses, in particular, have made it clear that he’s a major priority for them, including the Trojans, who came through with an offer last spring.

“The schools that are coming hardest after me right now are USC, Alabama, Washington, Texas A&M, Nebraska, Ohio State, Notre Dame and Michigan,” he said.

For now, Taylor-Stuart is intent on keeping an open mind when it comes to the recruiting process.

“I don’t have any leaders or anything like that,” Taylor-Stuart said. “It’s still too early at this point.”

He does admit, however, that USC is a school that he has legitimate interest in, and a major reason why is the Trojans coaching staff – specifically defensive backs coach Ronnie Bradford.

“I have high interest in USC,” Taylor-Stuart said. “Me and Coach Bradford have a great connection. He’s told me that he really needs me and that I’m No. 1 on his list. He said he wants me to commit there. We talk every day. And I talk to Coach [Clay] Helton, and really the whole staff is just great to me. They’ve told me they like me at corner and as a kick returner, like Adoree’ Jackson. Coach Bradford was saying that he likes my speed.”

Taylor-Stuart actually first became interested in the Trojans early in childhood due in large part to another San Diego product who went on to find quite a bit of success at USC.

“I liked SC when I was younger, like seven-years-old, because of Reggie Bush,” Taylor-Stuart said. “I was actually a running back then.”

And living just a couple of hours away from Los Angeles, Taylor-Stuart isn’t a stranger to the USC campus.

“I’ve been there four times,” Taylor-Stuart said. “I’ve been to two games and then I visited the school a couple times. The last time I was there was for the Oregon game. It was great. I went into the student section with my friend Mohamed Khalil (Saint Augustine Class of 2018 OL) and we had a lot of fun.”

Taylor-Stuart has tentative plans to return to USC in the coming months, and he also hopes to check in on a couple other schools under consideration.

“In the fall I plan to go to games at USC, Nebraska and Alabama,” Taylor-Stuart said. “I also plan to camp this summer at USC, there’s like a 75 percent chance of that happening. That’s the main one I know of right now because it’s so close.”

Looking to take his time, Taylor-Stuart hopes to take all five of his official visits before he makes his final decision, which he says likely won’t come until December at the earliest. As he dives more and more into things, he has some specific factors in mind as he looks at each school.

“I’m just really looking at how the school sets you up to be able to do something once football is over,” Taylor-Stuart said. “Also, how they prepare you for the NFL.”

Set to narrow his list of schools under consideration down to 16 on March 25, Taylor-Stuart has plenty to think about in the coming days. He did admit, however, that USC is one program that will certainly make the cut.