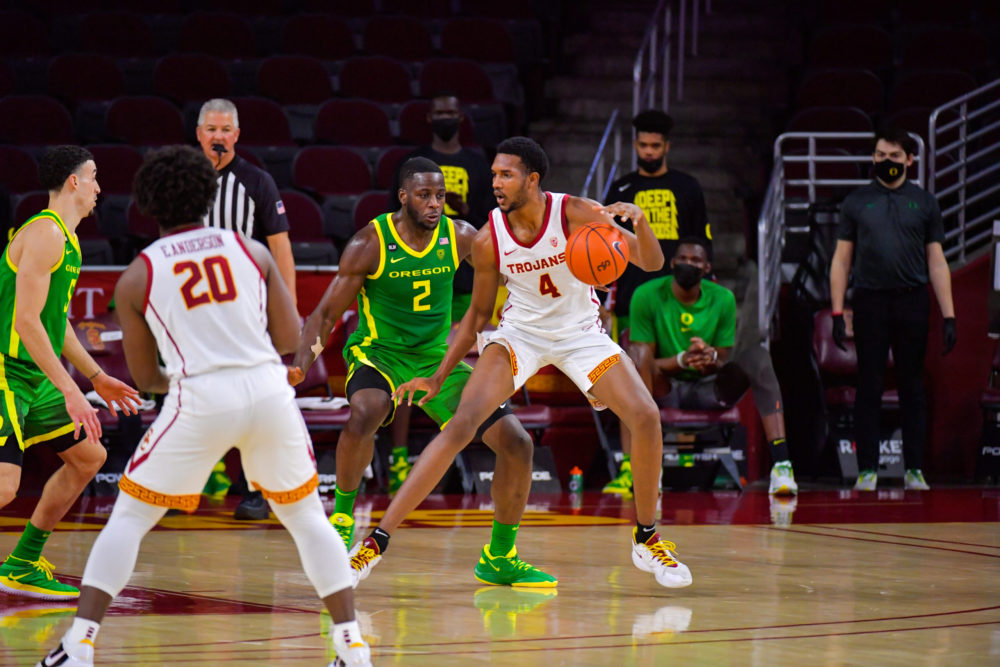 At first and perhaps second glance the careers of Evan Mobley and Onyeka Okongwu through each player’s one season at USC appear almost identical. Big O was drafted with the sixth pick in the NBA draft last year and has had an injury-plagued rookie season. Evan is expected to be one of the top three picks this summer.

Both were two-time California state high school players of the year. Onyeka won the POY awards as a junior and the next season he and Evan split the state POY awards. Evan won again as a senior. They are arguably the best two big men to play for the Trojans in the last sixty-plus years.

Evan has been labeled by some as a possible “generational” talent and compared to Anthony Davis at the same point in their careers. The “experts” tell us that Onyeka is projected to be a good NBA big man and may possibly develop to be comparable to Bam Abadayo, the 6’9” Miami Heat center who has improved in each of his five seasons in the league. Bam has a career average of 12.3 ppg and is averaging 19.1 this season.

The College Stats For Evan And Onyeka Are Almost Identical

Evan led the Trojans to a 25-8 season and a Sweet 16 appearance this past season. Onyeka’s Trojans finished 21-10 but were unable to play in the post season due to the pandemic. Evan’s team was deeper and better offensively. Both teams were very good defensively though Andy Enfield has said that he believes the 2020-2021 Trojans were a little better defensively. Both centers were the Trojans’ number one options on offense and the defender opponents had two scheme around.

There are only two Trojan bigs who can possibly be compared with the latest two greats. John Rudometkin (nicknamed “The Reckless Russian”) was a two time All American center in his junior and senior seasons way back in 1961 and 1962. Freshman couldn’t play in those years and the seasons were much shorter. In his three varsity seasons JR averaged 18.8 points. His career scoring record stood for 23 years and he still ranks ninth on the all time career list despite playing in only 79 games. He is also still fifth in career rebounds with 831, an average of 10.5 rpg. He led the Trojans to their last sole conference title in 1961.

The game was very different in JR’s day. He was a 6’6” center and his most dangerous shot was a sweeping hook shot. He played three years in the NBA, forced to retire due to Non Hodgkins lymphoma, and he passed away in 2015. His uniform number hangs in the rafters at Galen.

The other big man contender is Cliff Robinson. Cliff played two seasons at Troy before being drafted with the 11th pick in the 1979 NBA draft. Cliff was a solid 6’9” and 220 pound front court player who averaged 18.6 ppg and 10.5 rpg, and made 49.6% of his shots and 65.7% of his free throws in his two seasons at USC. In his sophomore season the Bob Boyd coached Trojans beat Utah State in the first round of the NCAA Tournament and lost in the next round to DePaul in the days when DePaul was a national power. Cliff was first team All Pac 10 player in both of his years at USC.

Over a thirteen year NBA career Cliff averaged 17.2 points and 8.3 rpg playing for six teams. He made 46.8% of his shots and averaged 19 or more points in three seasons.

In my mind there is no way to compare JR’s Trojan career with the other players. When he went to the NBA there were very big stars playing center including Bill Russell and Wilt Chamberlain and Rudometkin played forward.

The case to compare Cliff Robinson to Evan and Onyeka is much stronger. He didn’t have the explosiveness or athleticism of Evan and Onyeka and was not the same defensive presence. He had a good shot out to 15-18 feet but was not the inside power of the two recent Trojans. I rank Cliff third on the Trojan big man list.

After the recently concluded season Evan was included on every major All American first or second team and he was the first player ever in the Pac 12 and second ever in the Power Six Conferences to be conference POY, DPOY and FOY in the same season, joining only Anthony Davis. Onyeka was first team All Pac 12 but was not the conference freshman of the year. He was not on the pre season all Pac 12 team, not even honorable mention.

The expectations were different entering their freshmen seasons. Both were five star centers but Onyeka was under ranked as the 20th or 21st best high school player in his class. He was not a McDonald’s All American. Onyeka was under appreciated when he arrived at USC but after the first few practices it was clear that he was a star in waiting.

Evan Has More Skills And More Potential To Expand His Game

Evan came to Troy with more hype and he lived up to everything the “experts” predicted and the experts agree that he has a higher ceiling than Onyeka. He is a very unselfish player to the point that most Trojan fans wanted him to be more aggressive on offense. He has more offensive skills than Onyeka; he plays with finesse but has some real power going to the rim. Evan appears on his way to be a strong enough outside scoring threat that opposing NBA bigs won’t be able to leave him alone at the three point line.

Evan has a better handle, is a more skilled passer and seems to understand everyone’s role and their position on the court at a very high level for a big man one year removed from high school. Because he can do more with the ball he will attract more double teams and defensive attention. Evan is more polished and skilled, but he lacks Onyeka’s physicality inside and his outward passion. Neither show much emotion on the court but Big O’s emotion seems to be just below the surface, while Evan naturally shies away from attention. He let’s his game speak for him, leading some experts to question whether he will become a leader in the locker room.

Evan is so talented that his play sometimes looks effortless, almost to the point that he is not giving 100%. The truth, though, is that he has honed his talent to such a level that everything looks almost too smooth. Onyeka plays with more emotion. They both get off the floor very quickly; Evan looks like an antelope with his quickness off the floor while Onyeka is like very fierce lion.

Evan has a few things to work on to improve his game. He needs to gain weight and strength so that he isn’t pushed around by bigger post players. He may wind up splitting time between the four and five positions a la AD, but he doesn’t have the strength today to defend a Karl-Anthony Towns or Joel Embiid.

Second, Evan has to have more discipline inside and not bring the ball down so often. He had too many turnovers, often stripped by guards as he fought for position. He has the size and skill to shoot over practically anyone mid range or inside and does not need to take several slow, high dribbles to get closer to the rim and risk a turnover.

Third, Evan can improve his outside shot and free throw shooting. He has great form and it’s likely he will be much improved in both areas quickly.

Onyeka has been working on his shot from 15-18 feet and it is coming along. To be at Bam’s level he will need to improve his ball handling and passing. Miami runs its offense thru Bam at times and Big O is not ready to assume that role today. It’s unfortunate that injuries have robbed him of most of his rookie season but he is young enough to grow his game in big ways.

Onyeka will likely never be the defensive inside presence and shot blocker that Evan can become. He is three inches shorter and doesn’t have the same wing span. He will need to rely much more on his physicality and size inside and his ability to get off the floor quickly to defend the NBA big men. He should develop a better outside game over the next couple of years and he plays hard every minute he is on the court, but it’s hard to envision him playing outside as a four on either end.

Off hand I can’t remember any school in recent years having two freshman bigs drafted in the first six picks in back to back seasons. Evan and Onyeka are outstanding talents and have been a major factor in the Trojans’ 47-18 record over the past two seasons.

Evan has a bigger upside but “potential” doesn’t always automatically convert to success in the NBA. I expect both players to have very successful careers, play in all star games and possibly make All NBA teams. Will Evan prove to be the better NBA player? No one expected undersized Draymond Green to be as good as he has been for the Warriors. Success at the highest levels is as much about desire and work effort as overall talent. It will be fun to watch the careers of these two all time Trojan greats.