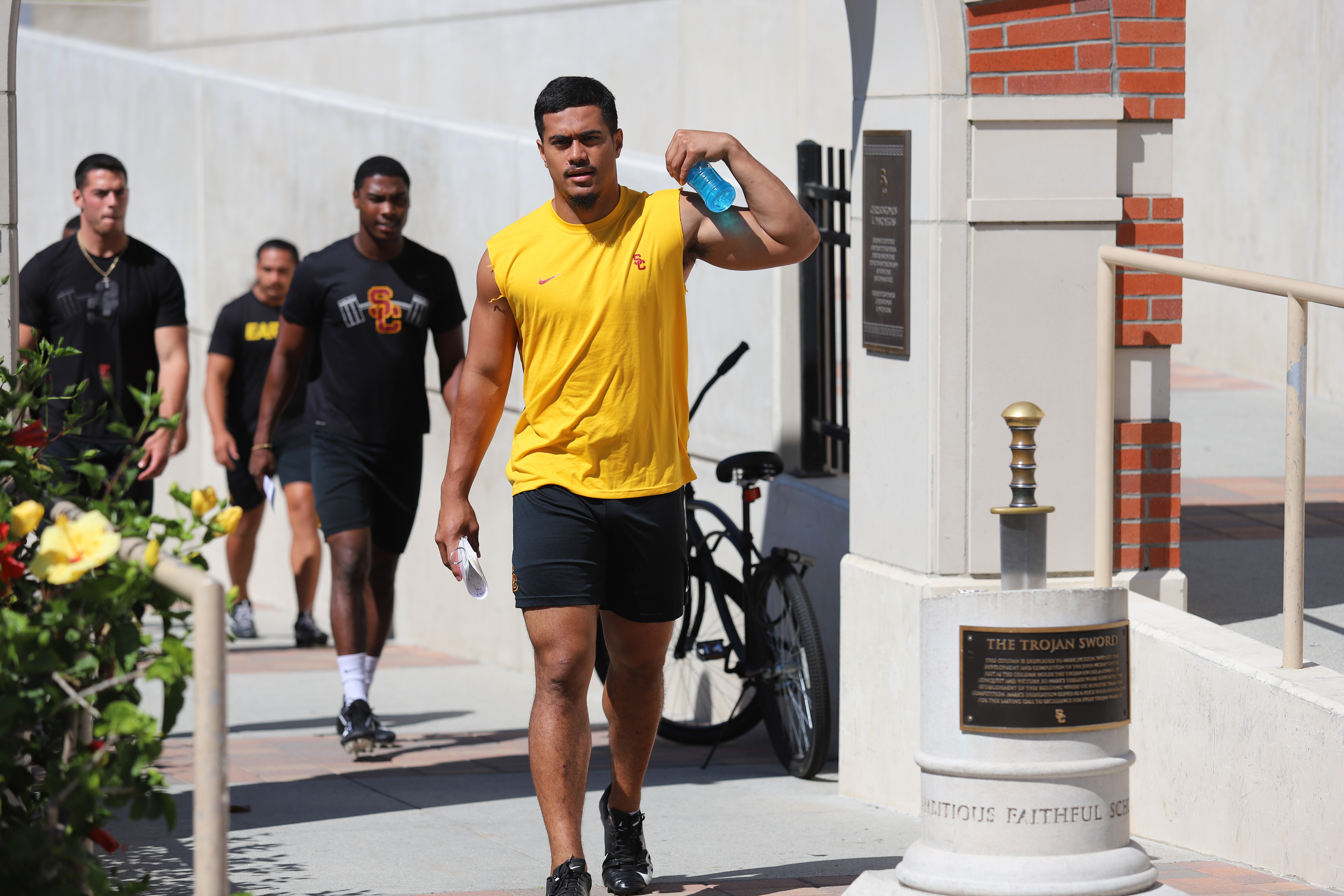 There might not be a bigger hole to fill on the USC roster than the search to replace Cameron Smith, a four-year starter at middle linebacker. In their quest to do so, the USC coaches made a couple of moves this spring, flipping veteran linebackers John Houston Jr. and Jordan Iosefa to middle linebacker.

The spot wasn’t new to Iosefa, who started at middle linebacker in place of Smith to start the 2017 season, and played in the middle as a freshman and sophomore. But Iosefa spent all last season on the outside, where it felt like things might not have fully clicked for him, on his way to 38 tackles and two sacks in 12 games.

After a return to the middle, Iosefa said he’s looking forward to spending this season back in a familiar spot. He and Houston split reps with the first team this past spring and both will be called upon plenty this season to man the middle.

“Overall, I think it’s where I’m most comfortable,” Iosefa said. “Having to make that transition outside my junior year, where it was beneficial for the team, I did the best I could. Making the transition inside, to me, down the line, it’s more beneficial to me and my body type.”

Of moving him and Houston to middle linebacker, Iosefa said their combined experience and knowledge of the defense makes it a good fit.

“Cam brought so much experience and leadership to the table,” Iosefa said. “Me, John, IE (Palaie Gaoteote), we were there learning and grasping the little things he brought.”

As one of just a few seniors on the roster, Iosefa is another player who said there is a notable change in team camaraderie this offseason, with full buy-in up and down the roster.

“Me and John are giving our best to the younger guys,” Iosefa said. “My freshman year was great, with Michael Hutchings and Zach Banner and all those guys taking in the younger guys. We’re trying to do the best we can for them because I feel like we lacked that the past two years and I think that reflects in our winning seasons.”

Iosefa said he and some teammates host a barbecue every Sunday and invite the entire team out.

“Just those little things I’ve never gone through,” Iosefa said. “Viane [Talamaivao] and Toa [Lobendahn] were my role models, but guys who aren’t there right now didn’t have that experience, or they went down the wrong path and now they’re doing their things. You need everybody to be on board. You need everybody to buy in. You can’t have negativity here and there bringing everybody down in that sense.”

Iosefa is also another USC player who didn’t hesitate to praise new strength and conditioning coach Aaron Ausmus, who has seemingly injected new life into this program while leading the offseason work.

“A breath of fresh air is always a good thing and AA brought that,” Iosefa said. “They make us want to run through a brick wall at time, and we’d do anything for them. It feels like if we let them down, we let the whole team down. They really brought that sense of energy and just a good feeling.”

The linebacker position looks to be loaded for the Trojans this season, as Iosefa and Houston team with fellow returners Palaie Gaoteote and Kana’i Mauga and are also joined in the middle by Solomon Tuliaupupu and early enrollee Ralen Goforth. On the outside, Hunter Echols, Eli’jah Winston and Malik McClain will look to provide a pass rush and some stability at that position. It’s a position where fans could see a variety of looks at should see some significant impact.

“As a group, we’ve taken hold of the team and we’ve set the tone,” Iosefa said of the linebacker group. “The linebackers will always be the cornerstone of the whole football team. Whatever happens with us, it carries over to the team. Hopefully we can set the tone for the season.”