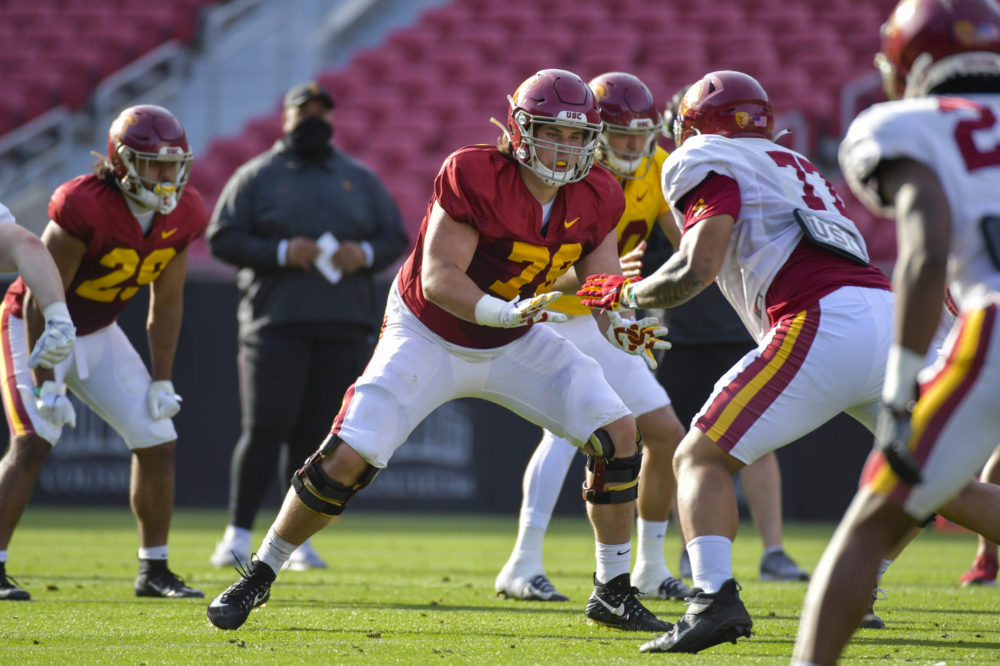 USC completes its five-week spring ball session with a practice on Friday afternoon, capping a 13-week run with winter conditioning sessions included as well. Head coach Clay Helton thanked the team, the coaching staff, USC overall and the medical staff for getting everybody through the last three months and said the team has gotten a lot accomplished over that time.

Helton broke down the major things he’s taken away from spring practice, which includes performances from several specific players and position groups.

“There’s several young, big men that are going to help us contribute next year in some role or fashion,” Helton said. “I think about the young defensive linemen with Jamar Sekona, Stanley [Ta’ufo’ou] and Jay Toia. Some guys that are coming back like Jake Lichtenstein, and what they’re going to be able to allow to do for us.”

Helton listed Jonah Monheim, Courtland Ford, Justin Dedich and Casey Collier as four young offensive linemen who progressed this spring. Helton said Monheim might have had the best spring camp of any player, regardless of position.

Helton praised the running back group with the “depth and talent” that will be in that room.

“He’s just as good outside as he is inside, which I think is going to make him an even bigger weapon,” Helton said. “To be able to move him around where people can’t find exactly where he’s at, it was great to see him with his big-play capability over and over and over again in camp.”

He was pleased with the performances of the two freshmen quarterbacks, though he added that he’s very pleased there are still 25 more practices in order to get them ready to potentially play in a game this fall.

The young defensive backs also caught his eye, and Helton really praised the play of Chase Williams, who stepped into the safety spot vacated by Talanoa Hufanga at the opening of camp and never relinquished it.

“It’s progressed Chase Williams a ton, into a dynamic leader,” Helton said, tossing Williams’ name into the mix as having one of the best spring camp performances of any player.

While Helton won’t go into strategy or in depth specifics, he did say that the spring offered the team an opportunity to introduce new schemes and personnel groupings, both offensively and defensively. On the offensive side, Helton mentioned specifically that the running back group allows them to do some different things.

One of the big talking points this spring has been establishing a new culture and the mentality brought in by the defensive coaches last year that didn’t quite have the best opportunity to imprint on the team without spring ball and with the disjointed fall camp. With an entire winter conditioning period and now spring ball, that mentality seems to be there.

“The really neat thing that I see being a head coach and being able to step back is it was really neat to be able to have the opportunity for TO (Todd Orlando), and Donte Williams and Craig Naivar and Vic So’oto, kind of blend their personality and give their personality to the defense,” Helton said. “They didn’t get that last year with a spring and abbreviated fall camp. But really that tough, edgy, aggressive, always-attacking mindset has really rubbed off on our defense.”

Liam Jimmons left practice last Saturday. Helton said it was a high ankle injury that has limited him. Jimmons did not participate in practice on Tuesday.

Bru McCoy sat out Tuesday practice. Helton said the wide receiver aggravated a hamstring issue. McCoy did not start spring ball on the field as he dealt with a hamstring injury then as well.

Drake Jackson is in concussion protocol. Helton said Jackson was one of a couple players involved in a car accident. Helton said the team is being “ultra-safe” regarding Jackson.

Michael Jackson III has an ankle injury. Helton said he believes Jackson would be ready to get back on the field if spring ball went another week, so there are no longterm concerns there.

Josh Jackson Jr. missed practice on Tuesday. Helton said he was dealing with an illness, not Covid related, and was back on the field for Thursday’s practice.

The Trojans will have discretionary weeks at the end of May, leading into a June 1 start for summer workouts and an early August start to fall camp.