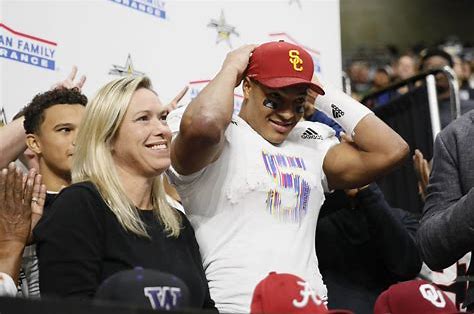 What is now considered a formality but still fraught with intrigue and scrutiny, former USC freshman football wide receiver Bru McCoy, who transferred to the University of Texas this past spring and participated in the Longhorns’ spring ball, has confirmed that he is entering again the NCAA Transfer Portal and barring any unforeseen barriers is expected to return to USC to play his college football.

Upon his original departure from Troy, head coach Clay Helton parted ways with McCoy on good terms and was gracious in his approach to his top recruit leaving for Texas. Helton said all the right things and left the door open in case McCoy (6-3, 215) had an eventual change of mind, which he did. Helton’s patience, compassion, and understanding for Bru was a factor in his star recruits return to Los Angeles.

Although McCoy hasn’t named USC as his official future destination, it is widely accepted that Bru is “coming home.” After leaving Austin at the conclusion of the UT spring semester, McCoy returned to his home in Palos Verdes (Calif.) and did some final soul-searching with his family. Led by Texas Longhorns’ head coach Tom Herman, noted UT star quarterback Sam Ehlinger, and others close to the program, they flew out to Southern California late this week to give it one last shot to try and convince McCoy to return to Austin for summer workouts.

However, in the end, McCoy’s heart and soul still resided with the Trojans, and he knew that was where he wanted to be. In a brief statement, Bru erased all doubts regarding his childhood dream of still being a Trojan football by saying in a prepared statement, “I will do my best to earn back any trust and respect I’ve lost as a result of this process. I will work hard to be the best teammate and person I can be as I prepare for the chance to compete again in the future.” All that was missing in the statement were the letters U-S-C.

No doubt, McCoy has stayed in touch with former Mater Dei High teammates and current Trojans like QB JT Daniels and wide receiver Amon-Ra St. Brown, who probably informed their former Monarch teammate regarding the positive changes happening at USC. McCoy was aware of the excitement of new Trojan offensive coordinator Graham Harrell and the momentum of new strength and conditioning coach Aaron Ausmus. At the time of his original departure from USC, McCoy saw a program that was in a shaky transition. All the turmoil has since died down, and the Trojans completed a successful spring practice cycle without incident.

Gracious to the end, McCoy thanked the Texas coaching staff and the university by adding the decision was “personal” and not a “reflection on the University of Texas.” It’s probable that McCoy will be forced to sit out a year without losing a season of eligibility. However, this is an NCAA Transfer Portal unprecedented case.