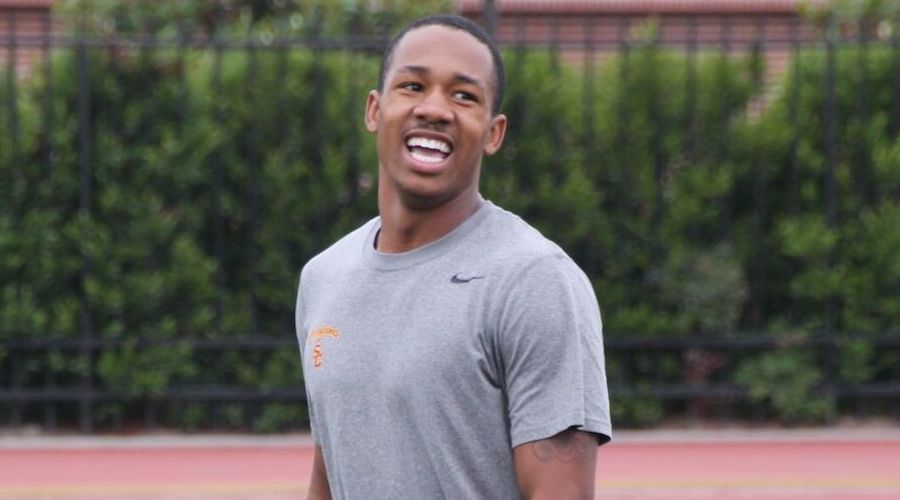 The future: When you watch Trojans incoming freshman corner Jackie Jones in this past week’s WeAreSC summer workout video, Jones looks like anything but a freshman. It’s not hard to see Jackie, the pride of Long Beach Poly High, being a productive contributor in the secondary for 2016. Having watched him during his prep days and viewing his performance this week, if you’re a Trojans fan, there is much to be excited about.

The move: Gifted sophomore athlete Ajene Harris, who showed so much promise at wide receiver until requiring hip surgery, is healthy now and is showcasing his skills in the Trojans secondary in the early stages of summer workouts. His athletic ability and his knowledge as a wide receiver have transitioned him nicely into the USC secondary.

The agreement: In reading WeAreSC publisher Garry Paskwietz’s assessment of the current position status of sophomore Jalen Greene, the quarterback-turned wide receiver-turned quarterback-turned wide receiver, it looks like Jalen has returned to wide receiver after playing QB during spring ball. If true, it’s a good move for Greene because he’s already a proven receiver who was getting better. However, I will say Jalen did improve as a quarterback this spring and certainly didn’t embarrass himself at all.

No experiment: I’ve heard from a good source that the move of Chuma Edoga from offensive lineman to defensive lineman is more than just an “experiment.” You can bet the coaching staff and Chuma had prior discussions on what would be a major move. Let’s face it, desperate times mean desperate measures, and the lack of depth along the defensive line is sunglasses glaring.

No-brainer: Alabama offensive coordinator and former Trojans head coach Lane Kiffin may be a passing game guru, but you can bet – considering the Trojans lack of depth, experience, and perhaps even talent along the defensive line – Kiffin will be heavily directed by his boss – loveable head coach Nick Saban – to test and attempt to batter the Trojans D-line like the Normandy invasion.

The turnout: The player turnout for the “volunteer” workouts was impressive in the first week of summer workout activity. Of course, it’s a lot easier to get motivated to show up when you know your first opponent is Alabama as opposed, to say, Arkansas State.

Media Day celebs: In case you missed it, at the upcoming Pac-12 media day on July 14, the Trojans will be represented by senior All-Pac-12 Zach Banner and junior All-Pac-12 corner Adoree’ Jackson. The dynamic duo will be available to the media at 10:30 a.m. along with head coach Clay Helton. The festivities will be held at the Loews Hotel in Hollywood.

Time marches on: Well, it looks like Adoree’ Jackson will likely not be heading off to the Olympics in Rio after failing to qualify for next month’s trials. It certainly doesn’t mean that Adoree’ is a failure in the long jump, but what it does mean is that for Clay Helton, secondary coach Ronnie Bradford, and his Trojans defensive teammates teammates No. 2 can now turn his full attention back to football and the Alabama Crimson Tide.

Center of attention: Although one would have to consider the likely Trojans center of the future is redshirt freshman Cole Smith, son of former Rams All-Pro center Doug Smith, the Men of Troy received a Class of 2017 commitment this past week from Brett Neilon, a 6-foot-2, 280-pounder from local Santa Margarita Catholic.

Versatility: Trojans offensive line coach Neil Callaway, who has shown he can recruit, likes his linemen to play multiple positions along the line, so Brett Neilon could end up playing some guard, as well.

Film review: Although it’s never over until signatures are signed on Letter of Intent Day, Trojans fans can celebrate that Brett Neilon spurned Michigan and Washington to announce for the Cardinal and Gold. Watching Neilon on film, I would describe him as a “mauler.” The fact he plays in the super physical Trinity League and is considered an elite lineman in that league is all you need to know.

Lining up: Coming on the coattails of Brett Neilon’s commitment, offensive lineman Andrew Vorhees (Kingsburg, Calif.), a 6-foot-6, 290-pounder, became the Trojans second OL commit of the week. It’ll be interesting to see if Neilon and/or Vorhees participate in the Trojans Rising Stars Camp on June 22&23.

Rising stars: Speaking of the Rising Stars Camp, it should provide further insight into the skills of Brett Neilon and Andrew Vorhees if they attend and participate in the RSC. As a potential defensive lineman in the camp looking to impress the coaching staff, a chance to go up against Neilon and/or Vorhees could bring or seal a Cardinal and Gold scholarship offer.

OC pipeline: There are a number of high schools in Southern California that are considered “USC pipelines.” Long Beach Poly is certainly near the top of the list as is Orange County powerhouse Santa Ana Mater Dei. Santa Margarita Catholic, another OC dominator has also made an impact for the Men of Troy or have you already forgotten former Trojans center Max Tuerk and some quarterback named Carson Palmer.

Still interested: Word is that while he is still committed to Alabama, quarterback Tua Tagovailoa still has interest in the Trojans.

Eye popper: Ticket prices on StubHub for the Trojans opener against Alabama in Dallas at AT&T Stadium are currently out of sight. The cheapest ticket in the nosebleed section is $345 with a top price of $7,105. YIKES!!!!!!

The last word: Although his high school colors are a dark blue and not really a “UCLA blue,” Trojans freshman wide receiver Tyler Vaughns (La Puente, Calif./Bishop Amat) drew catcalls at this week’s summer workouts for wearing even the slightest color reference to the evil ones from Westwood. Hey, the kid innocently didn’t make the connection of colors, and as Chickie Hearn used to say, “No harm, no foul.”