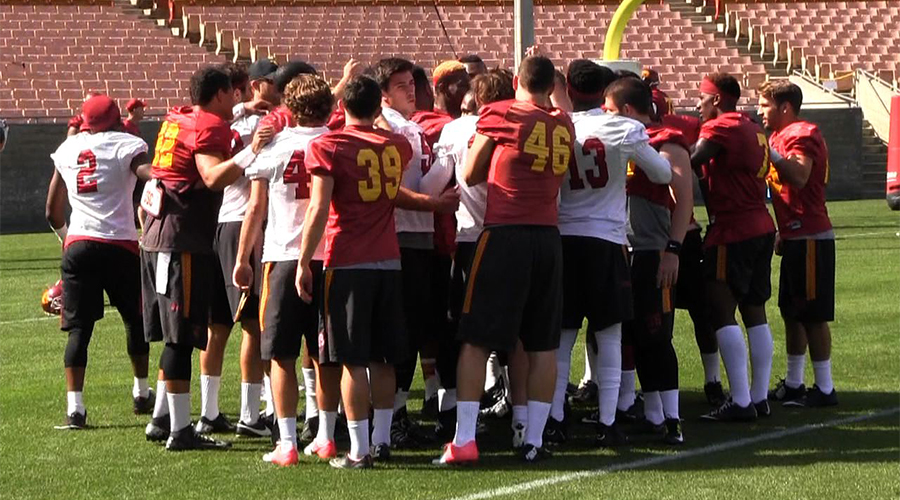 Hobbi hobby: Perhaps the most interesting development of the volunteer players workouts thus far – aside from incoming freshmen and former quarterback Jalen Greene – now visually confirming a wide receiver switch – has been the return of Cyrus Hobbi, the once Trojans center who appeared to have ended his football career for various reasons. Once a center not always a center, as Hobbi is practicing with the Trojans as a tight end.

Hobbi hobby – Part 2: Given the lack of depth at tight end and the apparent uncertainty at tight end, Cyrus Hobbi might be a welcome blocking addition when the going gets rough in the pit. Don’t expect him to be up for the Mackey Award in the future, but his return could be a big help.

Invitation only: So have you been invited to USC’s new recruiting lounge inside the Coliseum? It could be tougher to get into than Disneyland’s Club 33…unless you have a blue-chip family member or relative.

Swank attack: The new recruiting lounge looks like an impressive Hollywood establishment with bar stools and those starlet light bulbs that are usually reserved for dressing rooms at Universal Studio. Needless to say, there are photos of great Trojan teams and players all around, and, yes, there is plenty of Trojans-to-NFL references.

Heisman recognition: Inside the recruiting lounge is a large cardinal and gold banner paying tribute to the Trojans six Heisman Trophy winners. In fact, the headline at the top of the banner reads “Home of the Heisman.”

Excommunicated: Obviously, Reggie Bush, a banished Heisman Trophy winner, is not on the banner.

High security: Probably due to the threat of violence and tension at Pac-12 Football Media Day, the Trojans and the Bruins will not appear on the same day. The Bruins will be interrogated on Thursday, July 30th, while the Trojans will speak on Friday, July 31st.

The appointment book: For those that like to plan ahead, Steve Sarkisian, quarterback Cody Kessler, and linebacker Su’a Cravens will begin speaking during Friday’s Pac-12 Media Day at 10:50 a.m. PDT.

Worth repeating: If you read last Friday’s O/NSO to try and get some sleep, you probably saw that coaches and players from Arizona State, Colorado, Oregon State, Stanford, UCLA and Washington will conduct interviews with Pac-12 television partners (Pac-12 Networks, ESPN and FOX) and will not be available to the media on Friday. Why doesn’t the Pac-12 just save everybody the time and effort and just do media day from a Pac-12 TV studio in the Bay Area.

Worth repeating – Part 2: As one veteran wag commented recently, “Pac-12 Media Day is turning into a made-for-television event. I might as well stay home and watch it.” And ya know what? He’s right.

Worth repeating – Part 3: The Pac-12, however, did try to make a balance for written and electronic media by scheduling lunch and additional one-on-one interview opportunities at 1:30 p.m. – 2:30 p.m. Now really, how do you have lunch and still do interviews? Pass the Tums.

Stream of consciousness: If you cant get to a TV set or don’t have access to the Pac-12 Networks cable channel, you can catch all the proceedings through your computer at the Pac-12.org.

Injury report: The Pac-12 has announced they will have conference spotters at football games looking for injuries. No, we’re not making this up. Can you just see a “being reviewed” between a Pac-12 spotter and the Trojans team doctor or trainer regarding the extent of an injury. FYI, the Trojans already have something along these lines already in place.

Preseason confetti: It sure seems that Trojans sophomore offensive left tackle Toa Lobendahn is getting a lot of love in some preseason votes not only for All-Pac-12 but All-American, as well.

Lewis speak: In case you missed the WeAreSC Q&A with strength and conditioning coach Ivan Lewis, as it pertains to Toa Lobendahn, Lewis said, “He’s gotten a lot thicker this year, part of that is maturity but he’s also one of those guys who is starting to take it upon himself to want to dominate.”

“The Kumite”: Last Sunday at Prime Time Polynesian’s “The Kumite” event, which features many of the great Polynesian high school football players in a camp setting, Trojans line coach Bob Connelly was in attendance scouting the talent. Of course, it didn’t hurt the Trojans public relations recruiting machine by having camp helpers like Zach Banner, Damien Mama, JuJu Smith, Soma Vainuku and Viane Talamaivao in attendance.

The Friars: If you think that the Trojans still need to recruit offensive linemen, have you already forgotten that former Servite Friars offensive tackle Clayton Johnston is a blue-shirt recruit and is expected receive a scholarship once camp begins in early August? Johnson’s scholarship would be credited to class of 2016.

Heads up: Trojans football season tickets will be sent out first class by United States Postal Service (USPS) beginning mid-July and will continue through August.

The announcement: Haven’t heard the Pac-12 Networks announce yet who will replace Rick Neuheisel as one of the studio analyst for football. Neuheisel is now working for CBS and figures to grow larger into a larger role. Former Trojans quarterback Matt Leinart is a name that may be in the Pac-12 mix.

Numbers game: In their last two victories in 2014 over Notre Dame and Nebraska, the Trojans outscored the Irish and the Cornhuskers by a combined total of 94-56.

Congrats: Trojans sophomore corner Adoree’ Jackson finished 5th at the NCAA championships in the long jump, which earned him All-America recognition. In his final long jump effort, A.J. jumped 24-10.50/7.58m (+1.0). And how about his participation in the Trojans blazing relay team? Wow!

The final word – Don’t look now, but it’s possible with Adoree’ Jackson the Trojans might have a player that makes All-American in two sports (football/track) in the same year.