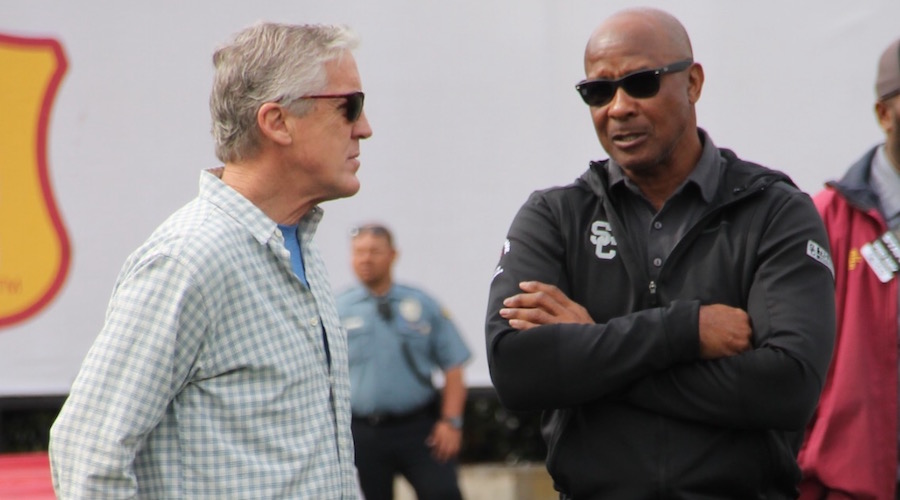 For Pete’s sake: If Pete Carroll (photo above  – on left) was the current Trojans head football coach, do you think he’d have given his blessing to the Coliseum capacity being decreased from 93,607, to 77,500 and a thumbs up to the new renovation design? In fact, did anybody – considering Carroll is in the Trojans Hall of Fame – give the former USC coaching legend a call for his input on the current design? If anybody could have given those in power reason for renovation reflection pause, it would be Carroll.

For Pete’s sake – Part 2: Somehow, I’d like to think if Pete Carroll had stayed at Troy and the present Coliseum capacity was filled or nearly filled on a weekly basis, there would be little appetite for the capacity reduction of the Coliseum.

For Pete’s sake – Part 3: Maybe Pete Carroll would have understood the need to reduce seating, but knowing that Carroll was very big into USC tradition and the history of the Coliseum, I find it difficult to convince myself he would have given his blessing on the “tower” placement concept – not to mention the dramatic change would decrease the home field advantage behind the visitor’s bench.

No kidding: If those powers that be think that the Coliseum will be as loud at 77,500 compared to 92,000, they haven’t visited places like intimidating, wall-of-sound venues like Ohio State, Penn State, and Notre Dame, which is actually increasing its seating capacity to 84,000. And did we mention the Rose Bowl?

The Olympics: Is the potential of the 2024 Olympic Games coming to the Los Angeles a major reason why the Trojans won’t reconsider a vastly better renovation design for the inside of the Coliseum?

IMHO: I understand the tradition of the Coliseum and the Olympics, but is one major event – no matter how big – going to decide the future seating design for generations to come?

The votes are in: The Collegiate Commissioners Association has voted to enact an early signing period for football in December 2017, allowing prospects in the senior class of 2018 to sign letters of intent during a 72-hour period from Dec. 20 to 22, 2017. Good idea or bad idea? Read on.

The votes are in – Part 2: The time difference between the new “early signing period” and the traditional first week in February is relatively minor. However, coaching changes, both head and assistant, can happen between the “gap” between the two signing periods, so student-athletes would be wise to just to what until the February period to sign the papers to make sure what they see is what they get.

The prodigy: Did you know that Trojans standout junior inside linebacker Cameron Smith was so good as a grammar school football player that as a fourth grader he played against eighth graders?

The memory vault: I know this will make sense to a select few – like the baby boomers – but linebacker Cameron Smith reminds me of former Trojans All-America inside linebacker Adrian Young, the linchpin and defensive leader on Troy’s 1967 national champions.

Agree or disagree: In his State of Troy address, USC Athletic Director Lynn Swann wrote, “The messaging that went out last week was really well received. Most importantly, people understand it. Of course, there are a few folks fearful of change, but change is inevitable in any renovation and necessary in our situation. We will be sure to communicate with every one of our Trojan Athletic Fund members and season-ticket holders one-on-one to address their concerns as we believe that we have a suitable option for everyone.”

Agree or disagree – Part 2: Lynn Swann added, “The fundraising support has been tremendous, and we are extremely grateful to all our loyal alumni and fans. At the end of the day, I believe that the Trojan Family will be happy with the changes that we are making and embrace the new seating grid. We will come together, support this football program, support this cause and turn out in full force for years to come. We will Fight On.”

Three more years: At one of the Trojan Huddles, a touring group of athletic officials and athletes such as head football coach Clay Helton and former head football coach John Robinson, men’s basketball coach Andy Enfield, and guest appearances by current football and basketball players, one of the revelations was the announcement by legendary Trojans Marching Band director Dr. Arthur C. Bartner that will retire in three years.

More Bartner: If Dr. Bartner does turn in his baton after the 2019 academic year, he will be going out after the completion of the first year of competition in the renovated Coliseum.

More Bartner – Part 3: And you thought high-profile attention is paid to the selection of a Trojans head football coaching position? Just wait to “they” lineup to replace Dr. Bartner, a true legend, the John McKay of Trojans Marching Bands.

The read: For those of you that can’t wait for the first national college football magazines to make their appearances, Lindy’s will be on the stands on May 30.

Cover boy: To the shock of nobody, Trojans quarterback Sam Darnold appears on the Southern California cover edition of Lindy’s national magazine.

High ranking: Lindy’s cover also includes it’s Top 10. The Trojans are ranked No. 2 in the country behind No. 1 Alabama. Pac-12 rival Washington is Lindy’s pre-season No. 8 in the nation.

It’s Athlon: Normally, the first college football magazine on the stands is Athlon. In its 2017 national cover photo, Sam Darnold is not part of the picture display of players. As part of Athlon’s national cover, Washington quarterback Jake Browning is pictured. However, in Athlon’s SoCal Pac-12 regional cover, both Sam Darnold and UCLA QB Josh Rosen are featured.

Bigger and better: Athlon claims that its 2017 Pac-12 preseason magazine in the biggest and most comprehensive publication (192 pgs.) compared to its competitors.

The last word: In this day and age of disappearing summer all-star high school games in California, it appeared that the longstanding Brea Lions Club’s Orange County All-Star Game (57 years) had met its maker for at least the summer of 2017. However, after announcing the game had no title sponsor and no venue, the game has apparently been resuscitated, according to the OC Register. For this summer, the board of directors of  Costa Mesa United, a non-profit group, has voted unanimously to organize the long-running all-star game that was cancelled in April by the Brea Lions. The game, for current high school seniors (coaches and players had already been previously selected) has been scheduled for June 30 at Orange Coast College with kickoff at 7 p.m.