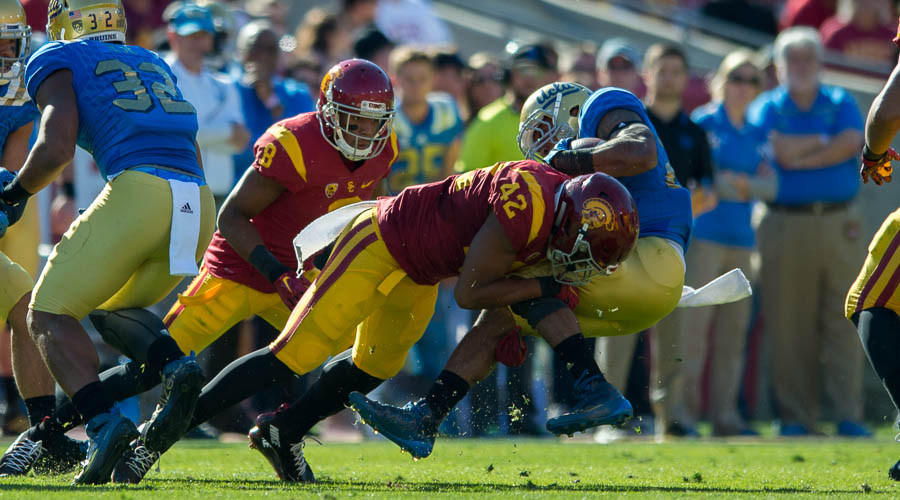 The evaluation: Near the end and with nearly all 83,602 spectators in the Coliseum chanting a deafening “We Are…SC,” the No. 24 USC Trojans (8-4, 6-3 Pac-12 South) made up for three seasons of UCLA dominance by trashing, physically abusing, and playing the kind of football that would have made legendary coach John McKay fire up his famed cigar and smile from ear to ear. With the convincing 40-21 satisfier, Trojans interim head coach Clay Helton undoubtedly raised his coaching resume by exhibiting the kind of offense and defense that he would bring if given the permanent head coaching Trojans position. Since the Notre Dame game, the Trojans have been constantly evolving positively – even in last weekend’s humiliating loss to Oregon.

The evaluation – Offensively: Yes, it was nostalgia flowing all throughout the Coliseum. With quarterback Cody Kessler (175 yds. passing, two TD passes of 20 and 7 yards, and a 1-yards score) taking more snaps than usual from under center and less pass attempts (26), the Trojans looked like a traditional USC power offense. Kessler threw for less yardage than he had all season, but the Trojans rushing attack, especially in the second half, was relentless. Junior tailback Justin David (132 yards) ran like former All-American tailback Clarence Davis, and freshman tailback Ronald Jones contributed 64 yards on the ground and surpassed the freshman rushing yard held by Heisman Trophy winner Charles White, but learned what it was like to get “hit” by Bruins defenders. The offensive line played near flawless football, and one time O-line coach Bob Connelly ran on the field in excitement after one punishing and dominating run.

The evaluation – Defensively speaking: This was the Trojans defense? Of all games played this season, the Trojans probably turned in their best performance, picking a good time to flex their muscles. Say what you want about DC Justin Wilcox – and it’s probably true- but he or Coach Helton dialed up more slants, blitzes, and linemen twists, and press man coverage than they have all season. UCLA quarterback Josh Rosen was tattooed a number of times with one relentless rush resulting in a 31-yard TD fumble return by freshman DL Rasheem Green. Beleaguered Trojans freshman corner Iman Marshall, rebounding from an embarrassing performance against Oregon, picked off two key interceptions and performed at a level that was once expected of the former prep All-American. In fact, most of Marshall’s secondary teammates nearly shut down all the UCLA receivers who had trouble making separation.

The bottom line: The Victory Bell now resides in Heritage Hall. Despite a mid-season coaching change, turmoil on and off the field, fan anger, student doubt, media skepticism, and unfulfilled expectations, the Trojans saved the best for a regular season last by not only snapping a three-game losing streak to UCLA, but physically taking it to the Bruins, displaying a bruising brand of power football, a smattering of penalties, a relentless defense, and masterful fourth quarter clock management.

Telling it like it is: After the game and speaking about playing in next Saturday’s Pac-12 championship game against No. 7 Stanford at Levi’s Stadium in Santa Clara, All-Pac-12 linebacker Su’a Cravens said, “This was the goal and the plan all along. I don’t like the way we got here, but we’ll still take it.”

Trojans head coach Clay Helton comments: “We talk about faith, family and football as a team and I want to take a quick second to thank the Lord. I cannot tell you how proud I am of this group of men, specifically the seniors and the team as a whole. I think about the seniors and the roller coaster ride they have gone through, for them to be able to call themselves Pac-12 South champions is a victory. I told them that this is Trojan football. This was a total team victory. It was a great defense effort, great ability to run special teams and to run the football. This is how you win championships. I am so proud and am a little bit lost for words.”

UCLA head coach Jim Mora comments: “It’s a new feeling for us here. The game turned, obviously, on the (Adoree’ Jackson) punt return there right before the half and the turnovers in the second half. We couldn’t get any, and they did, and they capitalized.”

Sour grapes: On the performance of his offense, UCLA freshman quarterback Josh Rosen said, “I just felt like we made that defense look a lot better than they necessarily were. No shots at them at all, we just didn’t execute like we should have.”

The barometer: On Saturday, the Trojans scored 40 points against UCLA. The Trojans entered Saturday’s game averaging 35.6 points per game.

The barometer – Part 2: On Saturday, the Trojans defense gave up 21 points to UCLA. The Trojans entered Saturday’s game allowing 25.0 points per game.

The Granddaddy of Them All: Now one win away from being in the Rose Bowl, Trojans all-purpose performer Adoree’ Jackson said, “We just wanted to worry about the Pac-12 South. Last week we lost, but God blessed us with another opportunity to play for the Rose Bowl. We did our job today. We had Coach Helton, our entire staff and the fans behind us.”

Cutting down: The Trojans were penalized 6 times for 30 yards. The Trojans come into Saturday’s game averaging 71.4 penalty yards per game.

The streak is over: On finally beating UCLA after three previous tries, Trojans quarterback Cody Kessler said, “It’s been three games now. Coach Mora has done a great job with their team. We knew this one was going to be tough. We made a decision either Monday or Tuesday this week that we weren’t losing this game. We rallied behind Coach Helton, he always gets us going. This was a full team effort. I am so proud of the defense and the offensive linemen today, even with (center) Khaliel (Rodgers) getting hurt and Nico (Falah) coming in. We didn’t make any excuses.”

Tackling the issue: The Trojans were led in tackles by corner Adoree’ Jackson and inside linebacker Uchenna Nwosu (above photo) with 6 apiece.

Don’t pick on me: True freshman corner Iman “Biggie” Marshall has been the object of attack by the opposition’s offensive coordinators. After two huge interceptions against the Bruins, Marshall said, “I just did my job. I understood I made a lot of mistakes last week (Oregon) and made sure I prepared myself this week. Coach Heyward helped me do my job. I listened to a lot of guys older than me like Cody (Kessler) and Adoree’ (Jackson). It’s been a learning curve. The whole secondary staff has helped me become the player I am today.”

Third down success: The Trojans were 8 of 19 in third down conversions.

Sack time: The Trojans recorded three sacks against UCLA, which recorded one.

Safety first: Did you notice that Adoree’ Jackson started Saturday’s game at strong safety? Opening the game, the Trojans corners were Iman Marshall and Kevon Seymour and the safeties were Chris Hawkins and Jackson.

Ladies first: Yes, that was a Pac-12 female side judge named Catherine Conti officiating the game.

Still in command: The Trojans defeated UCLA for the first time since 2011, thus improving to 45-31-7 in the series (not including two wins vacated due to NCAA penalty. Original record 47-31-7).

Tunnel leader: Leading the Trojans out of the Coliseum tunnel prior to kickoff was former Trojans All-American wide receiver Mike Williams.

1969: Honored in the third quarter was former Trojans wider receiver Sam Dickerson, best known for his 32-yard, fourth quarter touchdown pass from Jimmy Jones with 1:32 remaining in the 1969 USC-UCLA classic to help send the Trojans to the Rose Bowl. The final score was USC 14, UCLA 12.

The thermometer: Temperature at kickoff was 63 degrees with clear skies.

Slashed: Saturday’s National Anthem was performed by the Trojans Marching Band and accompanied by Slash.

Body count: Attendance for Saturday’s game against UCLA in the Coliseum was 83,602. The last time the Bruins played the Trojans in the Coli (2013), the attendance was 86,037.

Card stunts: Your eyes weren’t deceiving you at halftime of the USC-UCLA game. Indeed, those were card stunts being performed by the USC student section.

The candidate: Trojans wide receiver coach Tee Martin has been nominated for the Frank Broyles Award, given annual the nation’s top assistant coach.

Don’t say it: As UCLA’s head football coach, Jim Mora Jr. doesn’t like to acknowledge the name of the Trojans in any shape or form. Early on, he went by “Southern Cal” or simply “the team we’re going to play.” Gamesmanship or not, Mora does acknowledge that his parents and siblings all attended USC.

The revelation: According to a statement released by his family, former USC and NFL great Frank Gifford, who died in August of reported natural causes, had a brain disease that may have stemmed from his Hall of Fame football career. The family revealed that it had medical researchers study Gifford’s brain after he passed, and pathologists found evidence of chronic traumatic encephalopathy (CTE), a progressive degenerative brain disease.

The revelation – Part 2: Frank Gifford’s family statement also added, “During the last years of his life Frank dedicated himself to understanding the recent revelations concerning the connection between repetitive head trauma and its associated cognitive and behavioral symptoms — which he experienced first-hand.”

Consistency counts: Coaches and players always strive for consistency. Even for a big game like USC-UCLA, the Coliseum press meal stayed consistent with box lunches and all-you-can-drink soft drinks. The box lunch? Yours truly also stayed consistent with the grilled chicken, which also included chips, an apple, and a chocolate chip cookie. I will say, IMHO, the Kettle Corn is a nice touch and widely well received.

Best of luck: It is with a touch of respectful sadness to say goodbye and good luck to retiring L.A. Times college football columnist Chris Dufresne, whom I have know for close to 30 years. He is a class dude and extremely fair in his reporting, whether it be as a college football columnist, a team beat reporter, or just plain analyzing a topic. I have greatly enjoyed our friendship, and Chris is one of the last of my “old school” writer buddies. I will miss our pregame, halftime, and post-game exchange of views, agreeing with him more often than not. Yet, somehow, I don’t we’ve read the last of Chris Dufresne, and that’s a good thing.

The last word: The Trojans will battle Stanford next Saturday night at Levi’s Stadium in Santa Clara for the Pac-12 Conference championship (4:45 p.m. PT/7:45  ET/ESPN).