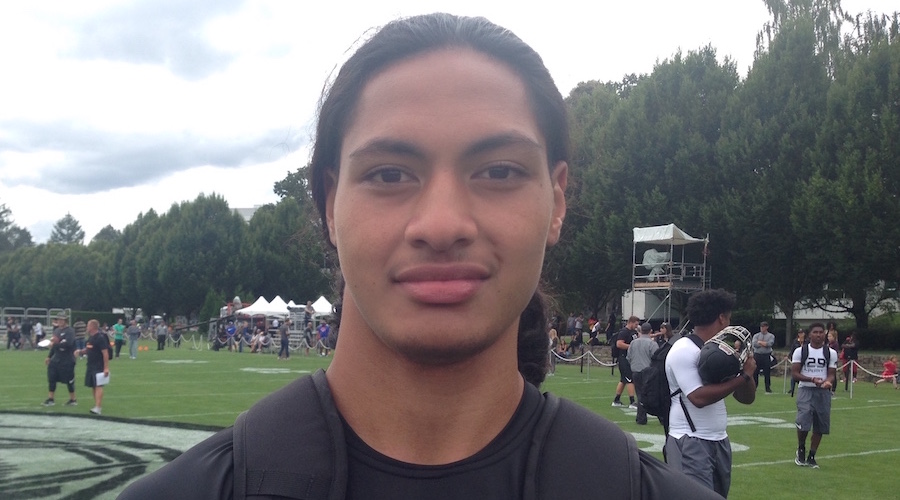 The analysis: Well, I guess we can put to bed the rumors and comments that Clay Helton and his staff were just Class of 2016 one-hit recruiting wonders. With Wednesday’s consensus top 5 signings for the Class of 2017, that pretty much puts to rest the question of Helton and staff’s recruiting ability. Now all that’s left is for it all to translate into on-field success.

All in agreement: Despite all the Trojans hoopla over the recent Helton recruiting classes, the Men of Troy will be “back” when they play in the College Football Playoff and win it all. And you’ll get total agreement in that assessment from the head coach, athletic director, and the Trojans family. Wednesday’s big signing success, however, was yet another big step in the national championship contention ladder.

No complaints: Given the fact that the Trojans started the 2016 season at 1-3, I’d say the recruiting turnaround from pedestrian to white hot ranks right up there with the best of the USC classes in recent memory. I think even that recruiting mastermind, Pete Carroll, would be proud of this assemblage of talent.

The future: Not to get too giddy and dish out an overabundance of hyperbole, but it’s entirely possible that next season’s Class of 2018 could surpass Wednesday’s motherload of signed talent.

True confessions: I plead first-degree guilty that I picked super Utah defensive tackle Jay Tufele (Bingham HS) to sign with the hometown Utes. After his official visit to Troy two weeks before signing day, I thought he and Marlon Tuipolotu had bonded so strongly during their official Trojans visit that it was a done deal to come to L.A. However, when Tufele took his recruiting visit to Utah the weekend before signing day, he tweeted out a very positive pro-Utah message. In hindsight, it was a courteous “thank you” to the Utes staff for having hosted him and putting their best foot forward.

True confessions – Part 2: I also misread Jay Tufele when he invited – through Twitter – all his friends and acquaintances to Bingham High to support his Wednesday announcement. At the time, it seemed to me why would you personally invite your Utah classmates and friends to your announcement if you weren’t going to Utah? As I watched the ceremony, it appeared that everybody surrounding Jay, including his little buddy that helped participate in the announcement, was cool with the idea of him leaving the state for Pac-12 South rival USC. Just another interesting twist in the sometimes unpredictable world of recruiting and signing day.

Driving the Carr: It kind of figured that Summit running back Stephen Carr was going to USC when you entered his high school gym and there were signs of USC adorning the festivities. At the podium was a “Congratulations” poster with the USC logo and in the background behind the podium was what looked like a typical Trojans media conference backdrop.

Most entertaining announcement: Hands down, it goes to Trojans tight end signee Josh Falo (photo above). If you haven’t seen it the Sacramento Inderkum High star’s announcement, enjoy: http://usc.247sports.com/Bolt/4-star-TE-Falo-chooses-USC–51017688

Creative announcement: No question to me the most dramatic announcement of signing day was the way Texas linebacker Levi Jones (Austin Westlake) announced for the Trojans. Instead of the traditional “hat” selection, Levi teased the live audience and viewership by wearing a Florida T-shirt, taking it off for a Florida State T-shirt underneath, and then finally taking off the Seminoles T-shirt to reveal a USC T-shirt.

The legacy: You know you’re getting up there in age if you claim to have been around when Trojan offensive line signee Austin Jackson’s grandfather, Melvin Jackson, played O-line for the Trojans (1974-75). For you old-time trivia buffs, where did Grandpa Melvin go to high school?

The legacy – Part 2: If you said Los Angeles Mt. Carmel, consider yourself a USC football historian.

The anomaly: Perhaps a throwback to another time, Austin Jackson (Phoenix, Arizona/North Canyon) was about as low key during his recruitment as you’ll ever see in this era. No frills, but Austin finally let it all out on his Twitter by announcing, “I am a Trojan, baby!”

The switch: Former Trojans commit Terrance Lang, the defensive lineman from Pasadena (Calif.) Marantha, has spurned an apparent USC grayshirt offer and signed Saturday with the Colorado Buffaloes. Lang was caught in a quality and quantity numbers game.

Overseas: Incoming freshman linebacker Juliano Falaniko (America Samoa) has the distinction of being the first Trojan footballer who prepped in American Samoa since Travis Tofi (2003-06).

Oy veh: Well, leave it to the Pac-12 Network to be streaming Clay Helton’s recruiting press conference and once the clock hit the top of the hour the signal was cut off.

Good bye: As has been announced, the Trojans will not have a bye week this season unless they reach the Pac-12 Championship since the Men of Troy finish their regular season a week ahead of the rest of the conference. This conference bye issue comes up because Stanford’s game against Rice has now been officially announced for Australia on Aug. 27, thus allowing the Cardinal to now have a bye week before playing the Trojans in L.A on Sept. 9.

The Key to Nebraska: Wide receiver Keyshawn Johnson Jr., son of you know who, signed with Nebraska. Nebraska is coached by Mike Riley, who coached Keyshawn Sr.  when Mike was the Trojans offensive coordinator during senior’s career at Troy or have you already forgotten the 1996 Rose Bowl win over Northwestern.

“O” no: The No. 1 prospect in Texas, Marvin Wilson from Houston, spurned Ed Orgeron and LSU and signed with Florida State. Don’t feel sorry for the former and beloved Trojans assistant and interim head coach; LSU finished its recruiting in the top 10.

FYI: If you were curious how former Trojans DC Justin Wilcox did as the first-year Cal Bears head coach on signing day, the Golden Bears finished last by most respected scouting services. Perhaps Wilcox’s best recruiting was bringing in what appears to be an impressive staff of assistants.

The advertising plan: It didn’t take long for the Trojans marketing staff to take advantage of the Trojans recruiting haul. On the front page of the official USC website there was a recruiting day message and a place to “click” for new season tickets.

The last word: With so much attention and jubilation regarding the Trojans recruiting class, Sunday’s Super Bowl seems like an afterthought. Since I am not a big fan of New England and the fact that there are no Trojans on either active playing roster, I’ll be rooting for the Atlanta Falcons since the late John McKay’s son, Richie, is the CEO of the Atlanta Falcons. Go Atlanta, beat the Patriots!