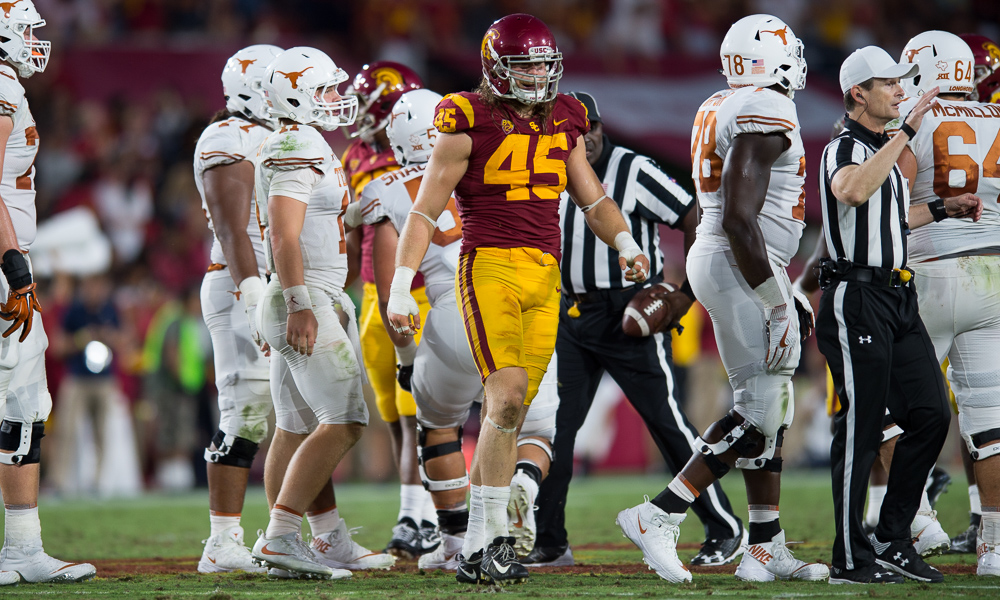 Population counts: When you look at the Pac-12 map, only USC, UCLA, Stanford, Cal, Washington, and ASU reside in populated areas. For schools like Oregon (Eugene), Oregon State (Corvallis), Washington State (Pullman), Arizona (Tucson), Colorado (Boulder), and Utah (Salt Lake City), their immediate hometowns can’t provide enough of a recruiting base to be competitive without heavily recruiting in Southern California. Therefore, when a school like Utah loses one its state’s top recruits like to the Trojans, it really hurts.

Welcome a Ute: The Trojans again stung the Utah Utes when one its key 2019 recruits, wide receiver Puka Nacua, committed to Troy not long after a recent Los Angeles campus visit. For Utah head coach Kyle Whittingham, it’s again a tough pill to swallow when one of your homegrown best not only commits to an out-of-state school, but one that resides in your own Pac-12 South Division.

A Utah pipeline: Kyle Whittingham and his predecessors in Salt Lake City are no strangers to the Trojans swooping in and taking some of their best prep stars. When you think of homegrown Utah players leaving the state to come to L.A., you conjure up images of current players like OLB Porter Gustin (Elk Ridge – photo above), DT Jay Tufele (Salt Lake City), LB Tayler Katoa (Layton), and former players like FB Stanley Havili (Salt Lake City), OG John Martinez (Murray), and LB Osa Masina (Salt Lake City).

Twin killing: Returning to recent Utah commit Puka Nacua, not only did the Trojans coaching staff singe the Utes again, but overlooked was Nacua’s well received recruiting trip to Washington. After experiencing both the Trojans and the Huskies, Puka felt that the cardinal and gold was his best fit. And you know if UW’s Chris Petersen is after an out-of-state player and loses that player to Clay Helton, that’s a major recruiting victory.

History lesson: While Clay Helton and staff have had a recent flurry of commitments, recent recruiting history has shown that it would be very surprising if some of these current Trojan commits don’t find other destinations once it’s all said and done by signing day(s).

Picture that: And the latest Coliseum renovation photo update: https://app.oxblue.com/open/usc/lacoliseumrenovation

Salute to Troy: For those with their Trojans’ calendar in front of them, Salute to Troy will be Friday, August 17, on Cromwell Field. Got to love those early evening Friday events in L.A.

The conclusion: After looking at all the current college football previews, the consensus is that the Washington Huskies will win the Pac-12. Of course, the good USC news is that the Trojans don’t play the Huskies during the regular Pac-12 season, and if they do meet in the conference title game in Santa Clara, whoever is the Trojans’ quarterback will have already had a whole season under his belt.

IMHO: If the Trojans find their quarterback and do meet the Huskies on a neutral field (Levi’s Stadium), I like the cardinal and gold chances. The Trojans’ defense will be good enough to contain UW tailback Myles Gaskin, and I never thought Husky quarterback Jake Browning has traditionally handled big games or pressure all that well.

IMHO: There is the school of thought that the best two coaches in the Pac-12 are Washington’s Chris Petersen and Stanford’s David Shaw. However, the last time Petersen coached against Clay Helton, the Huskies lost to the Trojans in Seattle, and Stanford’s Shaw currently owns a two-game losing streak to Helton.

A big one (UPDATED): For Trojan fans that want to get a very early look at preseason Pac-12 title choice Washington Huskies, UW has a huge game to open the season when the purple and gold play the Auburn Tigers at a neutral site in Atlanta on Sept. 1. Thanks to last season’s horrific results in bowl games, the Pac-12’s current tarnished reputation can find some much-needed rehabilitation with a UDub victory over SEC power Tigers, but since the UW/Auburn game is being played in the South, my money is with Auburn.

Smack talk: There figures to plenty of smack talk from current Trojans that attended either prep super powerhouses Santa Ana (Calif.) Mater Dei or Las Vegas Bishop Gorman when on the evening of August 24 at 6 p.m. (ESPNU), the two national prep super power will battle each other in Las Vegas. It’s all part of what is being called the GEICO ESPN High School Football Kickoff Weekend.

For the team on defense: The rule is quite simple: these players are allowed to block below the waist only within a 10-yard belt, which extends five yards behind and five yards beyond the line of scrimmage. If they are outside this belt when they block below the waist, it’s a foul – even if the block is directly from the front. It should be noted that clipping (i.e., blocking below the waist from behind) is essentially always illegal. The rules we are discussing here are for low blocks from the front or the side.

The last word: It’s been mighty quiet in regard to any “special or throwback” uniform changes for 2018, and I’ll take that as a good sign.