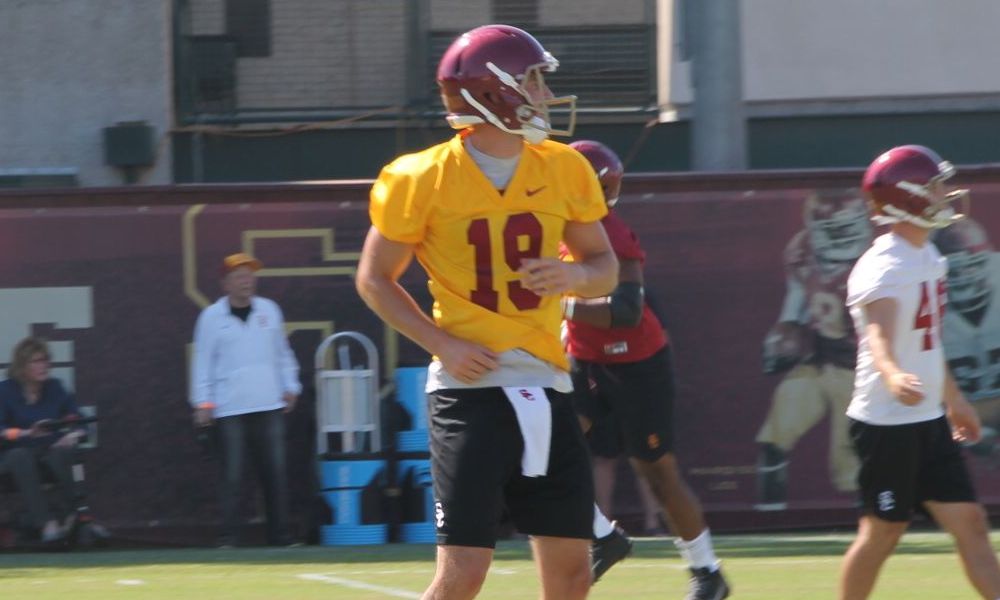 The big tests: Three. Trojan fans, remember the number three. That’s how many scrimmages – two being “live” and one being a mock game – the Men of Troy will have before taking on UNLV in the season opener on Saturday, Sept. 1. What makes the number three such a sense of urgency is when you check out the practice calendar and the new NCAA reduction in practice days, you realize that there are only four weeks until the first game. Time marches on fast!

The big tests – Part 2: You don’t have to be John McKay to figure out the timeline in selecting the Trojans’ starting quarterback. Clay Helton is aware of the situation, and that’s why he originally said the naming of his quarterback would be later rather than sooner, but sooner will be rapidly approaching before you know it. After all, next Saturday, Aug. 11, will be scrimmage No. 1, and including next Saturday’s combat, again there are only four Saturday’s left before the UNLV game.

The big tests – Part 3: The first big test is next Saturday in the renovating Coliseum, which will be a big eyeopener for many of the players and media seeing for the first time the “reconstruction surgery” of the Grand Old Lady. After Saturday’s practice, your humble scribe drove by the peristyle end of the Coliseum and what we were able to see could only be addressed verbally as “Oh My God.” There may be no adjectives to properly describe the enormity of “Pat’s Tower.” Believe me, as nice as the daily Coliseum real time photos of the renovation are, they don’t do justice to the size of this monstrosity. You can be sure the players will be awed by what they see.

The big tests – Part 4: After Saturday’s heated meltdown practice, Clay Helton announced that those tradition 7-on-7 passing drills will be shelved and 11-on-11 will become the norm to really put the pressure on quarterbacks Matt Fink (photo above), Jack Sears, and JT Daniels. If Daniels shined on the first day of practice, we thought that Fink gave a good account of himself on Saturday and Sears wasn’t bad either. Honestly, it will get down to those three critical scrimmages to make a proper evaluation, as it should. When all three quarterbacks are on their game, they bring something good to the table. However, “good” will not get the Trojans a Pac-12 title. One of the three has to emerge as great within the context of the offense.

Snap judgment: As you’ve probably read, the offense had the upper hand on the first day of practice, but the defense definitely has its way on Saturday. Does it mean anything? Well, defensively it means that on Saturday the defense came to play and seemed to jack it up a level when Daniels was the quarterback. When asked about JT firing up the defense, Helton politically said he thought it was more a case of the competition between the receivers and the secondary. I felt the defense was consistently animated in Daniels was taking the snaps, and Clancy Pendergast’s defense looking to really challenge the young freshman prodigy.

Full combat: With the NCAA reducing the number of practice days and the Trojans’ quarterback competition living up to its pre-camp billing, this Wednesday begins the “real” competition, as the Men of Troy will be in full uniforms. Sure, there were glowing reports about the first two days of practice in helmets and pleasantries how the team overall looked focused, but Clay Helton will tell you it all starts in earnest on Wednesday with collisions a-go-go.

Full combat – Part 2: In a sense, it’s refreshing that all the preseason J.T. Daniels buildup was not just the whims of a group of gushing and drooling sports journalists. The Trojans player also sense there is something special there. The better news, however, was many of the evaluating players also expressed that quarterback competitors Matt Fink and Jack Sears have upped their game, and the competition figures to continue to be as hot as the current August heat.

The baptism: Nothing will be more exciting on Wednesday afternoon’s first day of full uniforms than seeing how the true Trojan freshmen react to being violently blocked and viciously tackled by their more physically advance upper classmen. It’s put up or shut up time for the freshmen that didn’t participate in spring ball.

Center of attention: All-star senior center candidate Toa Lobendahn’s most challenging adjustment from tackle will not be knowing the offense but consistently executing catchable snaps back to whomever the Trojans’ quarterback. At least on Saturday, Toa was still working the kinks out of consistent snaps back to the quarterback.

Attention media colleagues: I was told during Saturday’s practice by a source that would know that the Coliseum’s eight portable press box trailers WILL have air conditioning. Seriously, did you really think that the NFL would allow the nation’s media covering Rams’ games to sweat it out in the heat of afternoon games?

Attention media colleagues – Part 2: Of course, the bad news is that media parking will now be at the parking structure at the corner of Figueroa and Exposition, and the scribes will have to walk quite a distance lugging their computers. Believe me, it’s more than a listed quarter mile. The good news, I suppose, is that there are a media shuttles back to the parking structure for three hours after the game.

Attention media colleagues – Part 3: Naturally, the general public will have little compassion for the media because many fans do the long walk for all Trojans home games. However, what happens if it rains? And the general public is normally not carrying a computer in what could be 90-degree heat on Sept. 1.

IMHO: It would be greatly appreciated and logical that the university provide media shuttles to the Coliseum three hours before the game. Intervals of 20 minutes on the hour seems appropriate. Pretty please?

Inspection: Speaking of the media, they’ll get a first-hand morning look at the Coliseum renovation update on Aug. 15.

The rankings challenger: As you probably are aware, the Trojans were ranked No. 15 in the preseason Amway coaches Poll. What you may not be aware is the Stanford Cardinal are ranked No. 13, which makes the two conference rivals game on Sept. 8 all the more intriguing.

The rankings challenger – Part 2: You might be interested to know that Washington (No. 6) is the highest preseason ranked Pac-12 team in the Amway Coaches Poll. I am sure you’re shocked to learned that Alabama is the near unanimous No. 1 team (61 of 65 first place votes).

A secondary award: Congrats to Trojans Iman Marshall and Marvell Tell lll for being placed on the Thorpe Award Watch List. The only Trojans ever to win the award for being the nation’s best defensive back are Adoree’ Jackson (2016) and Mark Carrier (1989).

The hit team: It was announced last week that Trojans’ linebackers Porter Gustin and Cameron Smith have been named to the Butkus Award Watch List, an award given to the nation’s best linebacker. If Gustin can stay healthy, it could get interesting in his march to be a Butkus Award winner. And don’t count out Smith who plays every game like it’s his last. The Trojan to win the Butkus Award is Chris Claiborne who won it in 1998.

It all adds up: When folks talk about the Trojans having the talent to potentially have one of the best defenses in the country, you just have to see the Trojans on various watch lists like Porter Gustin, Cameron Smith, Iman Marshall, Marvell Tell lll, and Christian Rector.

The last word: My sister, Lisa, recently returned from New York City and presented her brother with a New York Jets Sam Darnold No. 14 green home jersey (yes, the name Darnold is on the back). Sis said that in the Manhattan sporting goods shop the Darnold jersey was the big seller, and there appeared to be no other Jets jersey name on display. You’d think that current Jets star and former Trojans All-America defensive lineman Leonard “Big Cat” Williams would also be top seller.