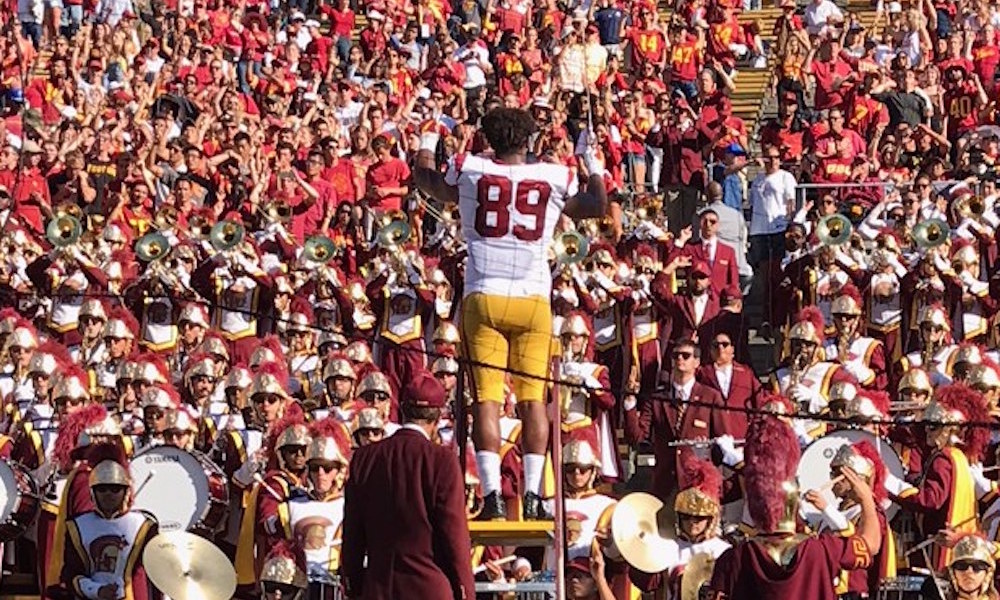 IMHO evaluation: Sitting here in the front row of Cal’s Memorial Stadium press box after the No. 5 USC Trojans (4-0, 2-0 Pac-12) exploded for 17 points in the final quarter to finally silence an unrelenting Cal Bears team (3-1, 0-1 Pac-12), 30-20, one couldn’t help but think: After four games, who are these 2017 Men of Troy? An undefeated team with a 13-game winning streak? A fourth quarter/overtime team? A work in progress? A team destined for an inevitable upset? Well, for some perspective, last year at this time the Trojans were 1-3, and they weren’t the club they’d eventually become. Trojan fans are hopeful that this season’s team will improve as much as the 2016 team in coming months of October and November. However, for now, it’s on to undefeated and No.16 Washington State (4-0, 1-0 Pac-12) in Pullman, a surging team that will likely test the Trojans’ metal to the max.

IMHO offensively speaking: Again, hot and cold, consistent and inconsistent, exhilarating and disappointing. While QB Sam Darnold threw for 223 yards and two touchdowns, he must feel he has the weight of the offense on his broad shoulders, and, yes, he also threw yet another interception. The good news is that his receivers collected most of his passes. The bad news is that the offensive line remains erratic in its run and pass blocking – and again the Trojans again were unable to convert a key fourth-and-1 situation. True freshman tailback Stephen Carr, who had 86 yards rushing and 47 yards receiving, continues to be a major factor in games, and junior tight end Tyler Petite, a NorCal native, played one of his best games.

IMHO defensively speaking: You have to happy with the Trojans’ six turnovers on defense and the fortitude to overcome Cal’s offense and Troy’s own offensive issues. Outside linebacker Christian Rector (photo above – No. 89) has been a revelation, but the secondary still has many Trojan fans sweating bullets on passing downs. It would help greatly if the Trojans D-line mounted a more consistent physical and violent rush. Sophomore corner Jack Jones may have played his best ball of his young career in the second half. The real acid test will come next Friday night with the Washington State passing circus of head coach Mike Leach. The Trojans will need to have a four-quarters, vicious pass rush to help their secondary.

IMHO special teams speaking: One area that doesn’t need major improvements is the field goal kicking of true freshman Chase McGrath who provided three more long range howitzers (37, 34, 46 yds.) to help insure the foundation of the tenuous victory at Cal. Chase, along with Stephen Carr, are certainly the brightest lights to emerge in 2017.

IMHO -The bottom line: A win is a win, but this season looks like infomercial for valium. Okay, want to feel better? Stanford – a team the Trojans hammered 42-24 earlier – crushed UCLA, 58-34, on Saturday night in Palo Alto.

Trojans head coach Clay Helton comments: “Going on the road in the Pac-12 and getting victories is always hard. I’m very proud of our football team for being 1-0 on the week and 4-0 on the season. Tremendous defensive effort, especially in the second half. To have 17 points created off of six turnovers and to hold them – an offense that can put up points in the second to half – to only scoring on that last drive in the second half, credit our defense and the effort by them.”

Cal head coach Justin Wilcox comments: “First and foremost, we need to give USC a lot of credit. They’re a very talented team, well coached, good schemes and they made good plays when it counted. So we give them a lot of credit. We were disappointed. We came into the game expecting to win, and we just didn’t make enough plays at the critical times.”

Sam says: On his team’s offense and the Cal defense, Trojans quarterback Sam Darnold said, “There was such a relentless pursuit by the (Cal) d-line, linebackers and DBs that rushed when it was a pass play. I felt a little bit of pressure, but I think it’s mostly our fault for not connecting on some of the deep balls and some of those opportunities. We need to take advantage of those when they come our way.”

Sam says – Part 2: On his interceptions, Sam Darnold said, “It’s a hundred percent my fault, first of all. I’m not getting the ball out far enough on deep routes or whether it’s balls being tipped, not seeing the d-linemen and him getting a big paw on the ball to tip it in the air. I’m going to continue to just play, that’s all I can do but, obviously, be more consistent for my team and continue to take what the defense gives me.”

The film room: Assessing the offense, Trojans wide receiver Deontay Burnett said, “I thought we played well, but I am looking forward to getting to the film so we can play better. I think we can improve all over, the running game and the passing game. Hopefully, a lot of guys can show what they can do on offense.”

The Hawk speaks: Looking back at the game, Trojans co-captain safety Chris Hawkins said, “We have to play better to beat Washington State and we know that, everybody on the team knows that. I heard their stadium is already sold out.”

Cut to the Chase: Once again true freshman walk-on placekicker Chase McGrath came through with three critical field goals and afterward said, “I threat every game the same and have the same mindset. I just do my job and focus. I am just happy to be on the team. I am not emotional during the game but let my emotions out after the game.”

The Rector set: Once again playing an outstanding game in replacing injured starting outside linebacker Porter Gustin, sophomore Christian Rector reflected on his opportunity to play by commenting, “It’s been great and it’s just been great out going out there for the love of the game. You practice all the time and for the game plan, I really love it and just go out there and play. I thought we started pretty slow, but we’re going to change that and we’ll watch the game film and fix that. We’ll move on, but we got the result we wanted.”

New Carr: Looking back at his first start as a Trojans tailback, replacing Ronald Jones ll, who did not make the trip due to injury, true freshman tailback Stephen Carr revealed, “It was very exciting. I was the first back to carry the load, and it feels pretty good. I feel I did a pretty good job. When I fumbled, I knew I just had to move on to the next play. You just have to let it go and move on to the next play. We (the team) seem to get into our groove in the second half.”

The captain: Assessing his team after the first third of the season, co-captain and junior inside linebacker Cameron Smith analyzed, “I think we’re a long way from where we want to be, and we’ve made great strides each week. We’re excited to get back home and get ready for Washington State.”

The infirmary: No new injuries were reported.

Sticky situation: One reason there were areas of empty seats in Memorial Stadium is that syrup was allegedly poured by Cal intruders onto the seats thinking they were going to be occupied by the USC band. The band was not designated for the “syrup seats,” but for fans. It took an effort by the Memorial Stadium staff time to clean it all up.

Amber alert: Despite the “syrup” episode, attendance at Memorial Stadium was 46,747, only 15,720 less than the listed capacity of 62,467. So where were all the fans? One press box scribe commented, “The Cal students must be out protesting.”

The Trojans Walk: The USC bench was literally less than 10 yards away from the visiting locker room, so the team virtually walked to their bench rather than make a grand entrance sprint.

Billboard material: Well, it must have come as quite an awakening for Cal fans when a roadside billboard in Oakland had a USC football advertisement in cardinal and gold. The billboard had a large white “Fight” and in gold lettering “For This Team.” To the left was the classic interlocking logo (SC) and underneath the word “Football.”

Celebrity watch: USC alum and Hollywood celeb Will Ferrell was in attendance on Saturday.

The explosion: Having been to Memorial Stadium a number of times, I still get startled when Cal scores points and a cannon, located high atop Tightwad Hill, explodes.

Declining points: Against Cal, the Trojans scored 30 points. Prior to the Cal game, the Trojans were averaging 39.33 points per game.

Declining points – Part 2: Against Cal, the Trojans allowed 20 points. Prior to the Cal game, the Trojans defense was allowing 26.33 points per game.

Limited rush hour: Against Cal, the Trojans rushed for 133 yards. Prior to the Cal game, the Trojans were averaging 203.3 rushing yards per game.

Not in a rush: Against Cal, the Trojans allowed 113 net rushing yards. Prior to the Cal game, the Trojans defense was allowing 167.0 net yards rushing per game.

Reduced flagging: Against Cal, the Trojans had five penalties for 53 yards. Prior to the Cal game, the Trojans were averaging 77.67 penalized yards per game.

The last word: Now comes the schedule acid test, a quick turnaround for next Friday night’s Pac-12 game at Washington State, which humbled Nevada 45-7 on Saturday evening. If you call Washington State a trap game, you won’t get much argument here.