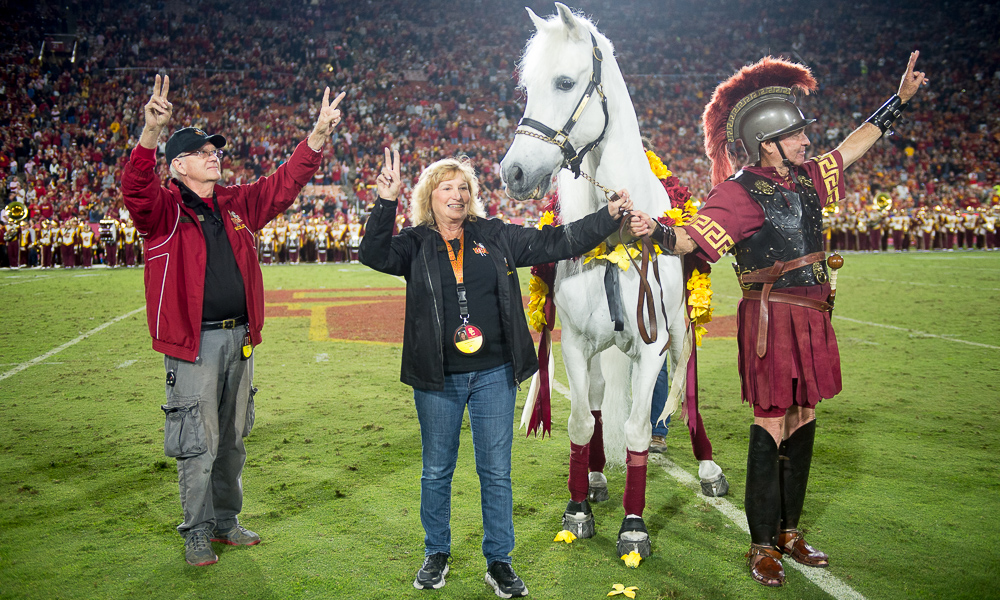 Not a creature was stirring:  Except Traveler (photo above), the Trojans’ white horse mascot, who will be do more than stirring Friday night in the Cotton Bowl Classic, making a rare road trip live appearance. FYI, Traveler also appeared in the 1995 Cotton Bowl.

Flower power: Every member of each team received a “yellow” rose upon arrival in Texas on Saturday. Texas is also known as “The Yellow Rose State.” Okay, so it’s not a red rose because if it was, they’d be in Pasadena and we don’t mean Pasadena, Texas.

Cameron and Sam speak: Upon arriving in Dallas and recalling last year’s game in intimidating AT&T Stadium, Trojans’ junior linebacker Cameron Smith told the media, “I think it definitely feels a little better being here since we’ve been here once. I think we get a couple opportunities to practice in the stadium, and that will help us because it’s a little jaw-dropping when you get out there and you see the big screen and stuff like that.”

Cameron and Sam speak –Part 2: Trojans’ quarterback Sam Darnold added, “Like Cam said, there’s nothing that can really prepare you for the game-like atmosphere that is at AT&T Stadium, especially when you’re playing a great Ohio State team that has a great fan base and us who also have a great fan base. So, it’s just going to be a fun experience and something that I think we’re all looking forward to.”

Urban speaks: At his team’s opening media exchange, Ohio State head coach Urban Meyer said of the Trojans, “Yeah, dynamic team. Their running back (Ronald Jones ll) is ridiculous; I finally had a chance to really watch him. And very good receivers. And the quarterback is obviously going to be a top two or three draft pick in the NFL. So that’s the biggest issue we’re dealing with.”

Practice makes perfect: The Trojans and Ohio State did not practice at AT&T Stadium today (Sunday) due to the Dallas Cowboys/Seattle Seahawks game. The Trojans, however, will practice at local Coppell High School while Ohio State will do their drills at Euless Trinity High School. If Coppell High sounds familiar, it’s the school that produced former Trojans’ tailback Emmanuel Moody.

Practice makes perfect – Part 2: BTW, Euless Trinity’s nickname is the Trojans, which upon learning of the school’s nickname, Ohio State DT Tracy Sprinkle said, “Coach Meyer and I are going to have to have a talk after this.”

A Christmas gift: Clay Helton’s Pac-12 champions get an early afternoon Christmas Day present courtesy of the Cotton Bowl by practicing in AT&T Stadium to be followed by the Ohio State Buckeyes. Would this be considered the early “weight-in”?

On that note: One of the “events” of the Cotton Bowl is the battle of the bands between the two participating schools. For those making the trip to Dallas, this Thursday at Klyde Warren Park, located in downtown “Big D”, will bring together the two competing bands for a 3 p.m. musical have-at-it. For those Trojans that made the trip last season to Dallas for the game with Alabama, it’s the same park that Art Bartner’s famous band performed for a pep rally.

History lesson 102: The 82nd Goodyear Cotton Bowl Classic will play host to two conference champions for the first time since 1987 when Ohio State defeated Texas A&M, the Southwest Conference Champion, 28-12. This is Ohio State’s second appearance in the Classic after participating in the 1987 Cotton Bowl.

The last time: Here is what the Cotton Bowl Media wrote regarding the Trojans’ lone Cotton Bowl appearance in 1995: “Historical artifacts just aren’t safe with USC in town. In the 59th Mobil Cotton Bowl Classic, the Trojans literally rewrote history with their 55-14 sacking of Texas Tech. In slightly more than three and a half hours, the Trojans established Cotton Bowl records for points (55), total offense (578), passing yards (435), points in a quarter (28) and points in a half (34). It was a classic display of textbook football. USC couldn’t have asked for a better way to celebrate its first New Year’s Day bowl appearance in five seasons. The Trojans combined an explosive offense with a dominating defense and solid special teams play to record one of the most awesome performances ever.”

Keeping track: Since it continues to be a source of travelers’ curiosity, Sunday’s Dallas weather report is partly cloudy and windy with a high of 45 degrees, low of 29, 0% precipitation, and 55% humidity.

Keeping track – Part 2: As for Friday’s game, the weather forecast is partly cloudy with a high of 50 degrees, low of 36, 10% precipitation, and 85% humidity.

The pregame banquet: Players, coaches, and dignitaries of the Trojans and Buckeyes will be honored during this Thursday’s “Goodyear Big Play Luncheon” at the Hilton Anatole Hotel in Dallas. Scholar – athletes from both teams will be honored. Coaches Clay Helton and Urban Meyer will make remarks during the program, and the two quarterbacks, Sam Darnold and J.T. Barrett, will take part in a drawing for door prizes. Brad Sham, who will call the game nationally on ESPN radio and is also the broadcast voice of the Dallas Cowboys, will serve as the Master of Ceremonies.

StubHub check: Cotton Bowl tickets on the well-known ticket broker site are going for a high of $599 and a low of $55.

It’s a sellout: FWIW, all USC travel packages for the Cotton Bowl are sold-out.

Good deal: If you wanted reasonable seats for the 82nd Cotton Bowl at a reasonable price, then you should have been a USC student. Trojan students are playing just $50 to sit low and near either end zone on the visitor’s side.

Seriously: One of the pregame “events” for the media is something called the “Olympics Media Competition,” which takes place in the Omni, the media hotel. Heaven knows what that means, but better have 911 handy.

Let the good times roll: As a media perk, following the game and after filing late stories past the bewitching hour, there will be a midnight to 4 a.m. buffet back at the Omni. Sounds good, but pass the Tums.

In Memory: Away from all the hoopla of the Cotton Bowl, comes to the very sad news that a Trojan football great has passed. All-America end and College Football Hall of Famer Hal Bedsole, a major cog in coach John McKay’s first national championship in 1962, has died at the age of 76.

In Memory – Part 2: Big Hal had been in poor health for some time, so his passing was not totally unexpected. However, for one who was 12-years-old and watching in person my first USC football season in the Coliseum, Bedsole and the 1962 Trojans will always have a special place in my heart. I am grateful I was able to do an interview for WeAreSC with Hal some time ago, and if you knew No. 19, there was never a doubt that he would speak his mind. He had a refreshing and sincere openness to his answers. “Prince Hal” will be missed, and our thoughts and prayers go out to his family.

The last word: And a Merry Christmas to all and to all a good night, and, BTW, beat the Buckeyes!