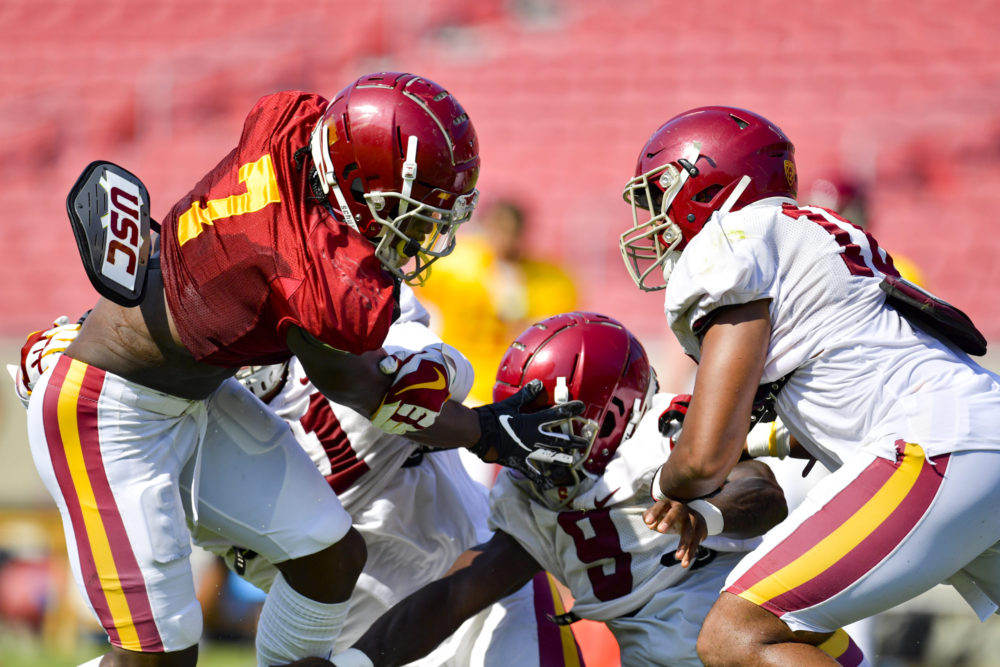 The talking points: When President Ronald Reagan announced the signing of the INF Treaty with the Soviet Union in 1987, he famously said, “Trust but verify.” The Gipper, unknowingly, might also have been foreshadowing the inability of the current Trojans media to verify the glowing reports from USC Trojans coaches and players during this present training camp. Due to COVID-19, of course, the media is not allowed on campus to cover practices or scrimmages and must trust all the encouraging reports from coaches and players through Zoom Conference interactions.

The talking points – Part 2: The opening paragraph above is prophetic. Why? Because the Trojans had their first Coliseum scrimmage on Saturday morning, and the media waited all afternoon for the release of pertinent statistics to pass on to our readership. What we received in the late afternoon was a 2:57 video and scrimmage photos. It was appreciated, but what was really needed – since we couldn’t watch the scrimmage – were at least some statistical crumbs to assess some conclusions from the proceedings. What were the quarterbacks’ stats? Who scored? Who carried the ball and how many times? Who led the defense in tackles? Who got interceptions or fumble recoveries? Who were the starters?

You can’t honestly decipher much from what happened through photographs and a brief video. My guess is that Saturday’s scrimmage was more of a glorified practice and perhaps statistics weren’t even kept. This is what can happen when the media is not present to watch the scrimmage and at least do our own unofficial statistics. How do you trust if you can’t verify?

The talking points – Part 3: Although those of us in the media are still eternally grateful to the Trojans sports information department for providing as much information through Zoom, photos, and videos, the only true way of assessing Clay Helton’s team is by viewing practices and scrimmages live and in person. Experience tells us that Gentleman Clay is an eternal optimist by nature, which is fine, but that doesn’t necessarily mean what the coach is giving us is foolproof. It’s the head coach’s opinion, and he’s certainly entitled to it, which is not to suggest he is feeding us all false information. At this point, however, the media can only rely on what Helton and his assistant coaches say. Historically, coaches are more than happy controlling the media message. By nature, getting substance information out of most football coaches is like trying to bleed blood from a rock. It is the nature of their position.

The talking points – Part 4: It’s the media’s responsibility to confirm what Helton and his staff say. Again, it’s trust but verify. If the media was allowed to be on campus and watch practices/scrimmages, which understandably it’s not, we could compare what we see during practice when asking the appropriate questions after practice. To be honest, some coaches are more forthright than others. Even on Pete Carroll’s staff, you knew who would give you the straight scoop, and who would dance around or avoid the questions.

The talking points – Part 5: Although WeAreSC.com and other sites want the Trojans to win every game and provide all that’s good inside cardinal and gold land, objective reporting and commentary is our credibility. Our late beloved publisher Garry Paskwietz used to say that when WeAreSC writes that things are good or bad, you’d better believe things are good or bad.

GP also used to also say it’s better to be late on stories and be right than to be first and wrong. It’s all about credibility, and it has served WeAreSC well during these many years. No doubt, it’s uncomfortable, frustrating, and sometimes painful to counter what we are being told by USC administrators, coaches, or even players when we believe what we’re being told is inaccurate. The truth is the truth, and credibility means more now than ever, and we will write the truth as we see it. Right now, during training camp, we must carefully rely on what we hear during Zoom conferences.

The talking points – Part 6: You certainly can’t blame Clay Helton for what the media can view during this horrendous pandemic. Given his personality, everything is beautiful and upbeat in practices; everything is always getting better. The proof of this, of course, will be how the Trojans play against ASU in the opener. Outside of a trip to play the Utah Utes, this six-game conference schedule is not a daunting challenge in which to go undefeated. No longer having to play No. 2 Alabama or No. 5 Notre Dame this season can keep do wonders for your record. Don’t blame Helton for the degree of scheduling difficulty. He doesn’t make or change the schedule; he just works with what he gets.

The talking points – Part 7: Although none of the media was at Saturday’s practice, here are a few observations that I saw from the “scrimmage” video and photographs. Of the limited highlights, receivers Bru McCoy and Drake London both showed they have moves once they catch the ball. Also noticed was Justin Dedich lining up at left guard next to Alijah Vera-Tucker.

The talking points – Part 8: Thanks to a tweet from a USC athletic representative, one of the other highlights from Saturday’s morning Coliseum scrimmage was a red zone, nice back-shoulder touchdown grab by the aforementioned Bru McCoy in the open end of the Coli. Although it was just a scrimmage touchdown, you just know it was meaningful to Bru after his long journey from Santa Ana (Calif.) Mater Dei to USC to Texas back to USC and then on the illness shelf. For the record, McCoy beat redshirt freshman corner Adonis Otey, who hails from Columbia, Tennessee.

The talking points – Part 9: Despite the fact the general public isn’t expected to be in the stands for Pac-12 games, the media was able to learn that the Trojans piped in loud crowd noise through the Coliseum public address system for their first of expected three scrimmages.

The noise factor: If there won’t be any fans in the stands for Pac-12 games – except for families if local health officials give the green light – why did the Trojans project “crowd noise” during Saturday’s scrimmage? Maybe the expectation is that all the teams in the Pac-12 will pipe in artificial crowd noise and music during games. For the record, the Pac-12 has given the okay for families to attend games.

Tackling the issue: Much has been made regarding the early improvement of tackling during the Trojans’ early portion of training camp. For the record, the Trojan defense brings back 11 of its top 13 tacklers from 2019.

By the numbers: Obviously, there won’t be any USC fans in the Coliseum stands this season, but simply as a numbers matter-of-fact, last season the Trojans averaged 59,358 for six home games.

Center of attention: Congrats to Trojans’ junior center Brett Neilon on being nominated for the Rimington Award, which is given to the nation’s top center. If you look at the overall list of nominees, it’s a bit staggering to see almost every team’s center in every conference being mentioned. The true work will be the cutting down the massive list and evaluating how each center performs on the field.

Age before beauty: For your edification, you’d probably like to know that the youngest Trojan on the team is true freshman Tuli Tuipulotu (Sept. 3, 2002) and the oldest is punter Ben Griffiths (Sept. 17, 1991).

Sign of the times: No word yet if the Trojans are going to have fans pay for cutouts of themselves to be placed in vacant seats in the Coliseum for home games. Since there are just three regular season home games, is it worth it?

Sign of the times – Part 2: Cal has decided to offer fans a chance to have cutouts of themselves for both home football and basketball games. Although you can’t be at Memorial Stadium or Haas Pavilion physically, you can purchase your very own cardboard cutouts for the 2020-2021 season to cheer on the Golden Bears. The pricing: $50 – Football, $50 for Haas Pavilion Only, and $80 – Football and Haas Pavilion Sports. The Cal marketing team even says you can buy a photo of your pet.

Caller No. 1: GK, I’ve heard you say many times that head coaches who are former quarterbacks want to throw the ball and give lip service to running attacks. Do you still believe it, and I heard the Trojans staff has an abundance of former high school quarterbacks from the state of Texas. True?

Caller No. 2, yes, Vic is a second cousin of USC Athletic and Pro Football Hall of Fame linebacker Junior Seau.

Caller No. 3: Grego, a friend of mine told me that one of Clay Helton’s staff is related to someone from the original Wild Bunch. Do you know who it is?

Caller No. 4: Greg, tell me something I don’t know about Vanderbilt transfer quarterback Mo Hasan.

The final word: Thinking about the Trojans’ 9 a.m. PDT kickoff against ASU on Nov. 7, have you started breakfast shopping for your family’s living room tailgate party?