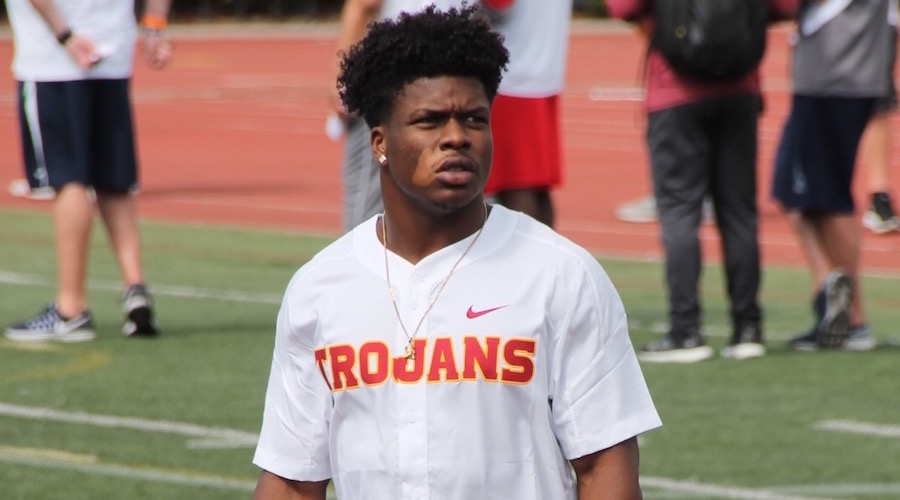 Keys to the ignition: There were others like quarterback Sam Darnold, receivers Deontay Burnett, and Velus Jones, and tailback Vavae Malepeai, but if you were looking for an eye-popping headliner at Saturday’s full takedown, warm afternoon scrimmage, look no further than true freshman tailback Stephen Carr (photo above), as No. 7 showcased the skills that made him one of the premier prep running backs in the nation at Fontana (Calif.) Summit High in the Inland Empire.

Keys to the ignition – Part 2: Stephen Carr, who had two TDs in the scrimmage and one nullified due to a senseless holding call, had more than one witness again making comparisons to former Trojans Heisman Trophy winning tailback Charles White. Carr (6-0, 210), a bigger version of White (6-0, 185), showed similarities such as uncommon toughness, elite quickness, and an explosive ability to plant a foot, make a cut, and the speed to do damage in the opposite direction. And to make things even more tantalizing, rookie Stephen was like a veteran in pass protection, standing up blitzing linebackers and all comers.

The crystal ball: Even with Stephen Carr so impressive, redshirt freshman tailback Vavae Malepeai (6-0, 210) showed again that he is one tough son of a biscuit and will also press for playing time, probably in short yardage situations. Vavae continues to remind many of former Trojan running back Malaefou MacKenzie.

Big on big: Trojans strength and conditioning coach Ivan Lewis said this past week that he is awed at the physical size of this current freshmen class of football players. He said he couldn’t recall an arriving freshman group this physically imposing.

The candidate: It would appear that the lead candidate to replace Matt Boermeester as the placekicker in 2017 is redshirt freshman Michael Brown, although special teams coach John Baxter said it’s way too early in the process to proclaim a leader. Brown’s competition comes from walk-on freshman Chase McGrath (Santa Ana, Calif./Mater Dei), but when it’s all said and done, it figures that Brown will get first crack against Western Michigan.

Just kicking it: Asked about the overall placekicking competition so early in the process, special teams coach John Baxter said, “We’ve got Michael Brown or Chase McGrath, so it’s only going to be one of those two. We don’t even have anybody else.”

Just kicking it – Part 2: So, what is the strength of Michael Brown’s placekicking? John Baxter said, “He’s done a good job, and he spent a year redshirting last year. He got minimal reps and those kinds of things and got all the reps this spring, and he’s getting the reps now. I don’t make comments about players until I see them in a game. I like him. We did recruit him for a reason.”

Just kicking it – Part 3: And about the strength and pressure of inexperienced Chase McGrath being in the thick of the competition, Baxter said, “It’s certainly not too big for him. He knew enough to step in and start playing.”

Just kicking it – Part 4: Although he is no longer in the program, did Matt Boermeester leave any type of work ethic or habits that the new kickers could learn from? John Baxter said, “We have a system of doing things and all the players learn the system. He (Boermeester) got the majority of the reps last year because he was the starter, but the system is the system and the good news is that Michael (Brown) was in the system last year – the terminology, the way we coach, and the way we teach.”

The kickoff: John Baxter said that the only contestants competing for kickoffs are Michael Brown or Chase McGrath.

The pressure cooker: Clay Helton said that the best way to deal with inexperienced placekickers is to put them into practice situations that test their nerves. One way is to tell the kicker that if he makes the field goal, practice is over. If he misses, then practice continues with “four more periods.” Helton said, “With all their teammates yelling and screaming, it puts some pressure on them.”

The pressure cooker – Part 2: Of course, having a placekicker attempt to conclude practice by converting a field goal is a lot different than attempting a game-winning a field goal in the Rose Bowl in front of 90,000 fans and a national television audience. As far as transitioning from practice to a real game, Clay Helton said, “You say a prayer, cross your fingers, and send them out.”

The evaluator: Former Trojans quarterback and NFL analyst Sean Salisbury on quarterback Sam Darnold: “He has a chance to be the best USC has ever seen.”

No complaints: No complaints here as it pertains to Clay Helton’s policy of allowing media into training camp and then Tuesday and Wednesday during the season. It sure beats what former Trojans interim coach Ed Orgeron has done now that he is the head coach at LSU. The complete LSU media is banned for the entire Tigers training camp, but LSU will provide photos and videos of practice. Is this called “controlling the message”?

The vision: In case you missed it, a picture was posted from a recent New York Yankees game where a fan was wearing a green New York Jets jersey with No. 14 on the back and above the number the name “Darnold.” Let the pre-draft insanity continue! If you haven’t seen the photo, check it out:

On the run: According to ESPN, Trojans running back Ronald Jones ll is the 8th best running back in the country for 2017. The best is Penn State’s Saquan Barkley, and after the Rose Bowl game, you’ll get no arguments from the Trojans.

On the run – Part 2: FYI, ESPN’s national running backs rankings include Oregon’s Royce Freeman (No. 4) and Washington’s Myles Gaskin (No. 7).

Coming soon: If you missed the announcement in your email, Trojans season tickets mailing begins on August 10.

BK returns to BKF: It was a great to see the appearance of Brian Kennedy at Saturday afternoon’s practice, and, yes, it’s the billboard mogul (Regency billboards) who built the outstanding football facility that is known as Brian Kennedy Field. There is no bigger USC supporter and contributor to the cardinal and gold, and no matter how big his personal and business successes, he remains the same down-to-earth guy from nearby San Gabriel, home of his beloved San Gabriel High Matadors.

In memory: It was sad to learn of the recent passing of former legendary Notre Dame coach Ara Parseghian, who left us at 94. His persona and coaching ability – two national championships at ND – matched against the Trojans legendary John McKay was truly a golden era in the electric rivalry between USC and Notre Dame. It was the best of the best.

In memory – Part 2: For Ara Parseghian, considered part of Notre Dame’s football coaching Trinity, the high point against the Trojans, IMHO, was 1966 when his Irish demolished the Trojans 51-0 in the Coliseum. It was also a turning point in the McKay era, as the Silver Fox swore this would never happen again to his beloved cardinal and gold.

In memory – Part 3: The first major low to Parseghian by the Trojans was in 1964 when his undefeated Irish were upset in the Coliseum in the waning minutes when Trojans QB Craig Fertig connected with wide receiver Rod Sherman for a 15-yard TD and a 20-17 thriller final.

In memory – Part 4: And without question, the biggest loss to the Trojans for Parseghian was the legendary 1974 Coliseum game when the Men of Troy came from a 24-6 first half deficit and shocked the Irish in the second half with 49 consecutive points and a 55-24 final. The game is forever known as “The Comeback.”

The last word: And a special thank you to the powers that be in the USC Athletic Department that erected a shaded tent on the sunny side of Howard Jones/Brian Kennedy Fields to protect the wilting and melting media. In these intensely hot, sunny days of August, the placement of the tent is especially appreciated by those of us whose prescription medicines and sensitive skin don’t take kindly to prolonged exposure to the sun. A thousand humanitarian thanks.