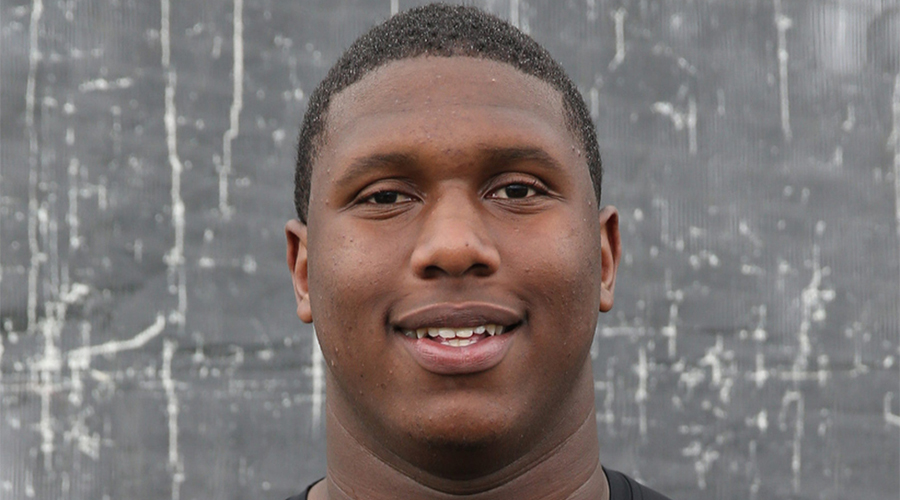 The Price is right: The USC Trojans will be searching for a left tackle replacement for departed All-Pac-12 lineman Chad Wheeler, and rumors are growing louder that maybe there is a little more smoke to the speculation fire that freshman offensive lineman E.J. Price (photo above) might return to the team. To be or not to be, that is the question.

The Price is right – Part 2: Price is enrolled at Troy for this spring semester, and he apparently hasn’t transferred…yet. It has been reported that Price visited Ole Miss in December as a possible landing spot. Now really, a chance to return to a streaking Trojans program or a landing spot in Mississippi? Trojans fans will be eager to see the release of the spring roster, which should give at least some clarification.

Why, why, why: That’s the million-dollar question regarding E.J. Price. Why did No. 75 suddenly leave the program? What happened and has there been enough time passed to reassess the reason from both parties – Price and whomever? The Georgia native came all the way across country to wear the cardinal and gold for a reason. Like many freshmen away from home for the first time, they all cope in their own way, sometimes good and sometimes not so good. Patience is not always at the front of the line in terms of playing time as a true freshman. Some deal with it better than others.

The thinking man: No doubt, E.J. Price watched the Trojans recently completed miraculous seasonal comeback, and no doubt he has had time for reflection and for what might have been – a sterling, growing freshman season. Stepping away from the pressure cooker of a bigtime and storied football program like USC might have been a good thing for Price. Sometimes the expectations for instant success is too much to handle. There is absolutely no question about the man-child’s talent. He was an obvious star in the making as far back as summer camp back in August. Had Price stayed on the team, he would have most certainly been the favorite to win the 2017 left tackle spot as a sophomore. Perhaps there will be a happy ending to this tantalizing rumor, or maybe like many rumors, it would be confirmed to be just that – a flickering then stuffed out rumor.

Then again: All the uproar of E.J. Price being enrolled in the spring semester might just be Fool’s Gold. Remember that “former” Trojans corner Adoree’ Jackson also enrolled for this spring semester, and we all know how that ended up.  One thing for sure, the WeAreSC message boards are on fire regarding the Price situation.

The stretch: Would it be a reach to say that what Tom Brady is to the New England Patriots, Sam Darnold is to the Trojans?

Looking ahead: Aside from the obvious holes in the offensive and defensive lines, the biggest and perhaps the most important battle during spring practice may be the backup quarterback position to Sam Darnold.

Looking ahead – Part 2: On its own merit, this could the most intense and scrutinized competition of the spring. It figures that redshirt freshman Matt Fink and early freshman enrollee Jack Sears will have at it. At the outset, Fink would seem to hold an edge due to his knowledge of the offense and his adjustment to the speed and intensity of the college game. However, don’t count out Sears. It certainly wouldn’t be a surprise if the competition to be Darnold’s caddy carries well into training camp in August.

Tommie talks – Part 2: On his departure from USC to LSU, Robinson, through a press release, said, “I want to start off thanking Coach Clay Helton for giving me this wonderful opportunity. This has been a very difficult decision because of my love for USC and this community. I have accepted a new opportunity at LSU. If I did not have the chance to say goodbye to you in person, I am forever thankful to you for the generosity you showed me and my family while at USC. Fight On!”

A reminder: Due to all the attention paid to the excitement of the incoming freshmen defensive linemen, don’t forget that a major key to next season will be the return of Kenny Bigelow and don’t think that Stevie T. didn’t have an influence on Mr. Kenny. Word is that it’s thumbs up for Big Kenny’s return.

Hidden gems: Because each new recruiting class has the “grass is greener on the other side of hill” mentality, the Class of 2016 tends to be forgotten. I am looking forward during spring ball to the presence and development of wide receiver Tyler Vaughns and tight end Cary Angeline on offense and outside linebackers Oluwole Betiku and Connor Murphy on defense.

Tough again: ESPN writes that the Trojans have the toughest schedule in the Pac-12. ESPN writes, “This isn’t as immediately tough as last season for USC, which began with a whooping at the hands of Alabama. But Western Michigan, winner of 13 games last season, figures to present a challenge right out of the gate. Tom Herman’s visit with the Longhorns to the Coliseum promises to deliver video replays of a certain national championship game, and the trip to South Bend is rarely an easy one.”

Say what: With all due respect to ESPN, you can bet the rest of your paychecks for life that the Coliseum won’t be showing “video replays of a certain national championship game.” Yeah, right. Let me tell ya, the last thing Trojans fans want to see is a replay of the heartbreaking loss to Texas and QB Vince Young doing his thing.”

California dreaming: While it’s pure dreaming, several Trojans fans have asked about Marcus Allen being named the running backs coach. Now that would be quite a development, but don’t bet the farm on it.

California dreaming – Part 2: Another candidate whose time may in the future is former running back Stafon Johnson, who is getting high marks as an assistant at L.A. Dorsey High. Stafon is just beginning his coaching career, and it isn’t a stretch that he will one day make a production running backs coach at the collegiate level.

Transfer game: In case you hadn’t heard, Trojans oral commit Matt Corral, the highly acclaimed quarterback for the Class of 2018, has withdrawn from Oaks Christian High School. There was no official explanation why Corral departed OCHS, but there is no question the gifted prep quarterback is now actively looking to transfer to another program.

The defense rests: The Trojans Rose Bowl championship was recognized in Sacramento this week in front of the California State Senate. Two representatives were from the defensive side of the ball (safeties Leon McQuay lll and Chris Hawkins) and one member was from the offensive side of the ball (Deontay Burnett).The resolution to honor the Trojans passed 40-0. Now that’s what I call domination bipartisanship agreement.

Jet landing: Former Trojans offensive coordinator Jeremy Bates has been hired by the NY Jets to be their new quarterback coach. Got to give Bates credit, he keeps landing somewhere in the NFL.

Insider trading: Give the Trojans athletic high marks for their recent job fair for athletes. Just another great perk if you have athletic gifts. Some of those job presenters certainly got my attention, especially those high-profile electronic media (TV/cable) outlets.

The heads: It will be interesting to see if the Trojans have another bobblehead promotion during the upcoming season. Last season’s Marcus Allen bobblehead appeared to be quite a success. Could a Matt Leinart bobblehead be on the horizon? After all, Matt was recently named to the College Football Hall of Fame on the first ballot.

The smart one: One of the big keys to the passing game in 2017 will be the healthy return of Steven Mitchell Jr. BTW, Steven has already earned his Bachelor’s degree as a junior and is now set on getting his Master’s in December. Not that’s a true definition of a student-athlete.

The last word: One of the advantages for Trojans fans of the Men of Troy playing in this past Rose Bowl is that there isn’t too much time between Jan. 2 and the first week of March, which figures to be the commencement of spring practice. For most cardinal and gold fans, that’s long enough. Thank goodness for Letter of Intent Day on February 1st, which was a nice time little halftime show. The clock is now ticking.