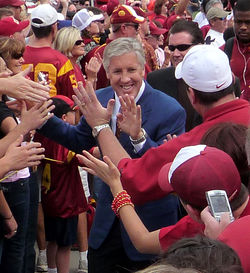 Let’s first begin the IMHO Sunday by imagining we’re all at the 901 Bar and Grill, the still famous off-campus tavern for generations of USC students and alumni, crooning along with recording artist Mary Hopkin, who is singing her 1968 Billboard hit “Those Were the Days” because those really were the days, my friend. Sing jovially and read on.

* Those were the days, my friend, when you never worried how many Trojans football wins per season because 10 was the unspoken minimum – nor were you concerned about the direction of the program and the head coach.

* Those were the days, my friend, when visiting teams walked slowly down the Coliseum tunnel to face the Trojans feeling like it was the Bataan Death March.

* Those were the days, my friend, when the Trojans once walked briskly down the Coliseum tunnel chanting “War Time,” accompanied by the music of Eminem’s “Lose Yourself,” knowing they were going to kick some ass.

* Those were the days, my friend, when the Trojans won the 1962 national championship with a star quarterback named Pete Beathard, who actually also played in the secondary and intercepted three passes that glorious season.

* Those were the days, my friend, when you could sit with your longtime Coliseum seat neighbors to watch a home football game without fear that next season you’d all be dispersed or relocated due to Coliseum renovation and/or refusal to upgrade your donation to the university.

* Those were the days, my friend, when legendary USC coach John McKay and his coaching staff would head across the street from campus to Julie’s Restaurant to unwind after practice and draw up new plays and formations on napkins in McKay’s favorite booth.

* Those were the days, my friend, when the Coliseum capacity was 92,000 and during the zenith of the Pete Carroll era there were weekly sellouts or close to it.

* Those were the days, my friend, when everybody knew that Heisman Trophy winner Mike Garrett played his high school ball at Roosevelt High, located in the Boyle Heights area of East Los Angeles.

* Those were the days, my friend, when parking lots across the street from the Coliseum were not $80 dollars or higher but $10 per car.

* Those were the days, my friend, when the USC football team was as consistently great as the USC Marching Band.

* Those were the days, my friend, when the Trojans could actually run the football.

Summer ball: The Trojans have begun their summer workouts, and Trojans fans will be excited to know that DE Korey Foreman, the nation’s No. 1 recruit, is part of the action. Like you expecting he wouldn’t be there live and in person?

Fox interview – Part 5: Also, for the record, it should also be noted that Clay Helton was also still a USC assistant coach when Williams left early for the NFL after the 2014 season. Helton became the interim head coach and eventually named head coach during the 2015 season.

Blue-chip sightseeing: Forgive me for being so inquisitive, but thanks to a social media photos release, why would the Trojans take recruits this weekend to the Rams/Chargers SoFi Stadium and use the enormous scoreboard to highlight USC football when millions and millions were spent on renovation of USC’s own home stadium, the Coliseum? So much to impress recruits in the immediate LA area besides SoFi Stadium. No doubt that these same recruits were taken to the Coliseum, but really?

Blue-chip sightseeing – Part 2: Apparently the Trojans were trying to convey the message that USC sends players to the NFL, and SoFi Stadium was a point of emphasis (see tweet below). Now if the BLVD video at SoFi stadium showed video and/or photos of past and present USC greats now in the NFL, I get it. If not, aren’t there enough photos of USC NFL players inside the John McKay Center?

Happy, happy, happy: You will be happy and delighted to know that an email was sent out by USC announcing they are now accepting season ticket deposits for the 2021 football season. Hmmm, so much for past deadlines and the deadlines before that.

The commit: I dare you to tell me that when WR/S Kevin Green Jr. announced his verbal to Troy as part of the class of 2022, you were shocked and surprised that the lead recruiter for Green was coach Donte Williams.

Caller No. 1, in the Katz win-loss totals for the 2021 season, we’ve predicted an 8-4 record at best, but that could change depending on players heading to or from the NCAA Transfer Portal.

Caller No. 2: Grego, is there any update on why true freshman defensive tackle Jay Toia is leaving USC after performing so well in spring practice?

Caller No. 2, Toia sent out a message last Monday that although USC was his dream school, had all “A’s” in his first academic semester at Troy, and the fact that he was at or near the top of the depth chart, because of COVID-19 and not able to make other official recruiting visits, he made a hasty decision. Are you buying it?

Is it possible that Toia, who visited UCLA during last week and was reportedly at Michigan this weekend, was in conflict with his defensive line position coach Vic So’oto, known as an intense and disciplined taskmaster? It is known, and So’oto says so himself through early interviews, that he holds players accountable, and that they must take on personal responsibility. A personality conflict or a responsibility conflict?

Caller No. 3: G-Kat, did you ever have a chance to eat at Julie’s, the once iconic bar and grill across the street from USC and the hangout of John McKay?

Caller No. 3, yes, I did. I must tell you from my memory of it was that it was somewhat dark inside and I thought the food was average and not at the all-star level, but that’s just IMHO.

Caller No. 4: Mr. K, I know that the Notre Dame and Bay Area Weekenders are always at the top of the list for USC fans that like to watch the team on the road. Since those trips are a given, what would you recommend for other away games this 2021 season?

Caller No. 4, I know a lot of folks will disagree, but I would select the away game at Washington State. There is nothing glamorous about it, but driving from Spokane to Pullman is a beautiful and relaxing drive through the beauty of Eastern Washington, and there is nothing like seeing the little town of Colfax and its Main Street along the way. Martin Stadium is a small but intimate setting, the air is clear, and playing the Cougars in September avoids weather issues. If you’re the adventurous type, give it a shot. You can also stay along the Idaho/Washington border for convenience to WSU and the stadium.

Caller No. 5: Katzer, name me an indoors or outdoors restaurant hangout that you used to partake and still exists today.

Caller No. 5, wow, an easy one. No doubt it would be “The Hat” where I grew up in Alhambra (corner of Garfield and Valley), and now has locations around the SoCal area. The Hat is best known for its pastrami and beef dip sandwiches and fries. And let’s add an “orange bang” drink to wash it down. Not exactly the healthiest of food, but it sure tasted great!

Unless times and/or locations have changed, The Hat locations: Alhambra (the original), Brea, Glendora, Lake Forest, Monterey Park, Murrieta, Pasadena, Rancho Cucamonga, Simi Valley, Temple City, and Upland. Again, check to see if any of these locations are still in existence.

The last word: Speaking of those were the days, my friend, it’s never too early to ask, but where will you be spending your July 4th as COVID-19 restrictions lessen?