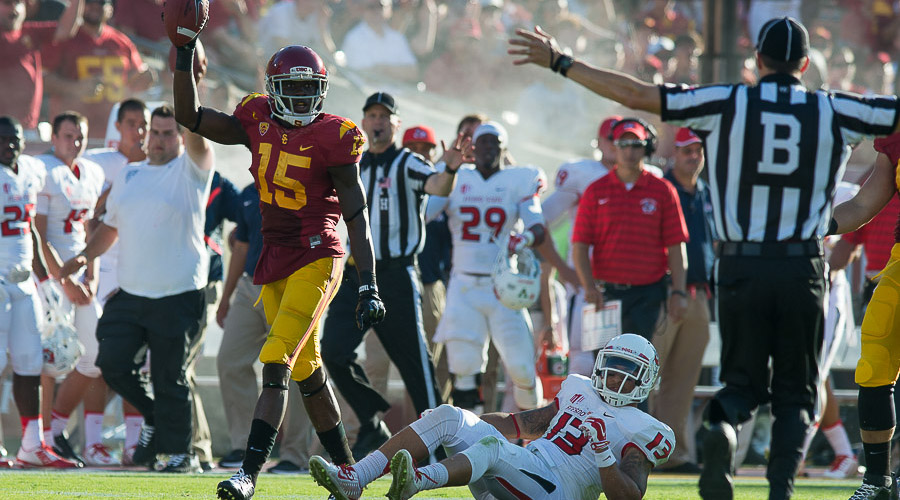 It’s Super Sunday: This afternoon, its Super Bowl Lll (3:30 p.m. PT/NBC), and if you’re a USC fan, do you root for New England or Philadelphia? Well, by now you’re aware that former Trojans’ wide receiver standout Nelson Agholor (photo above No. 15) will start for the Eagles against the Patriots. If you’re still riding the fence, deciding a rooting interest, Nelson could be your difference-maker. There, now you have somebody for whom to root.

The middle man: The second Trojan to win a Super Bowl MVP was Raiders’ running back and former USC Heisman Trophy winner Marcus Allen, who was named the 1984 MVP in Super Bowl XVlll.

The last man up: The last USC Trojan to be named a Super Bowl MVP was 2014 when former Seattle Seahawks and Trojan linebacker Malcom Smith was named the MVP of Super Bowl XLVlll.

Super guru: Former WeAreSC columnist and USC Athletic Hall of Famer Steve Bisheff has quite an illustrious record of predicting Super Bowl winners. At one point, Bish correctly predicted 19 straight winners and had an overall record of 31-5.

Super guru – Part 2: For the record, Bisheff told me he normally picks the team with the best defense, but in New England quarterback Tom Brady and head coach Bill Belichick, they may be the best of this or any era. Translation: New England.

The confessional: I must confess that I did something I normally don’t do. I was at the Las Vegas Wynn last weekend and plucked down $20 on Philadelphia, taking the Eagles and the 4.5 points. If Philly wins, I was told I’ll win a whopping $18!

Gone but not forgotten: It was sentimental tears seeing the aged Coliseum Press Box being destroyed. So many memories – good and bad – but a great place to converse and watch a game.

Gone but not forgotten: While we admittedly aren’t thrilled with the Coliseum renovation plans, we are intrigued regarding the new press box. Some of the planned perks has got many of the scribes excited about the new viewing digs. We are told that behind each writer’s seat will be cubicle in which to put articles of clothing and briefcases, a luxury that didn’t exist in the old press box.

Gone but not forgotten: Certainly, one of the challenges of the old press box was that even though you might be seated on the 50-yard-line, you could be stuck with a vertical metal window slot in front of you, which meant leaning to one side or the other when the ball was in the vicinity of the 50. No complaints here, just happy to be there and enjoy the game.

View from the top: As mentioned before regarding the old press box, there was nothing like the viewing spot on a clear day where one could see the famous Hollywood sign, a beautiful view of the buildings of downtown L.A., and, of course, the University of Southern California.

Transfer: The proposed idea of allowing collegiate players to transfer to another university without having to redshirt a year would bring a titanic of chaos. Think about it, if a doesn’t make first team in spring ball, rather than work his way up, he’ll just transfer. Horrible idea, to say the least.

Transfer – Part 2: If you need further proof of the potential effects of possible new transfer rule, just look what it has done locally at the high school level in the California Interscholastic Federation (CIF). The amount of transfers is out of control.  If you think that recruiting is cutthroat now, this could be a full-on disaster.

Sign of the early sign: Speaking of a new recruiting rule already in effect, just look what’s happening with players that signed in December that want to either change their mind or continue to take recruiting trips. With coaching changes like at Arizona and recruit “signer’s remorse,” there are potentially big issues. The old way of doing things – signing the first week in early February – might not have been perfect – but this new option is more trouble than it’s worth.

The last word: One final Super Bowl piece of trivia, you might want to know there has never been a former USC quarterback that has won a Super Bowl.