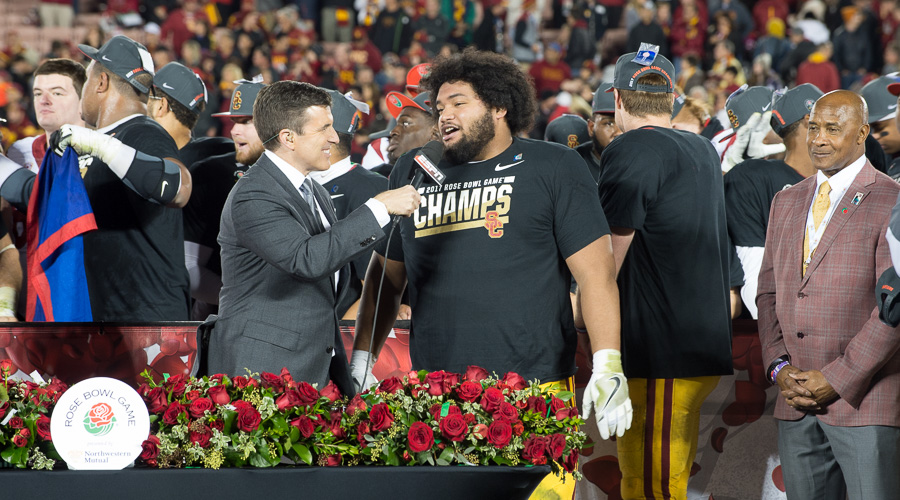 The spokesman: With under two weeks remaining before National Letter of Intent Day, the USC Trojans main focus is the drive for quality defensive linemen. With that in mind, perhaps their biggest recruiter in that department is “former” defensive lineman Stevie Tu’ikolovatu (photo above), the 2017 Rose Bowl Defensive MVP, whose presence and example have gotten the attention of this weekend’s official blue-chip D-line visitors, Jay Tufele (South Jordan, Utah/Bingham) and Marlon Tuipulotu (Independence, Ore./Central).

The spokesman – Part 2: In all likelihood, the Stevie T story has been well related to Jay Tufele and Marlon Tuipulotu not only by the Trojans coaches but by Stevie himself in one form or another. The heart and soul of the Trojans 2016 defense, Stevie is one of the best salesmen the Cardinal and Gold can present. Players listen to players, and when Pacific Islanders listen to Pacific Islanders, it can be a powerful message. And, of course, it doesn’t hurt that the Men of Troy are in need of D-line quality and quantity.

The spokesman – Part 3: Stevie T provides credibility and maturity to the cardinal and gold recruiting process, and while nothing is ever final until the ink is dry, there’s no question that Stevie is giving back to the Trojans in his one season of wearing the cardinal and gold – and what a season it was. And recruiting history confirms that one player’s presence can affect present and future recruiting classes.

Paranoia time: You know we’re approaching the end of this recruiting season when there’s fear that the Trojans won’t sign enough “5-star” players to crack somebody’s national top 10 class. Well, it takes just a couple of those glowing “5-star” players to commit late in the recruiting game to put a smile on all those worried Trojans faces. As has been recruiting history, don’t feel sorry for the Trojans when it’s all said and done, so help me Clay Helton.

The domino theory: Setting the defensive line recruiting table, the Trojans on Saturday got a commitment from workmanlike defensive lineman Brandon Pili (Portland, Oregon/Westfield), whose film looks like a Stevie T clone. Pili (6-3, 310), who committed to Troy during Saturday night’s Polynesian All-Star game in Hawaii, is an inch taller than Stevie, but he fits that immoveable nose tackle spot. Pili could be the beginning of a future “Poly-Trojans” defensive line, so be prepared to break out the Haka dance.

IMHO: Some could argue that the 2017 schedule is not nearly as tough as last season’s just because there’s no Alabama. However, while the Trojans figure to the favorite in all their regular season games, playing at Notre Dame and, yes, Washington State could be problematic. And one never knows how teams like Notre Dame and UCLA will rebound from last season’s debacles, but history says they figure to formidable.

Planning ahead: The Pac-12 Championship Game will be played either Dec 1 or Dec. 2 at Levi’s Stadium in Santa Clara. I am sure Trojans fan will be rooting for a Dec. 2 selection, which would be a Saturday and an easier travel itinerary.

Planning ahead – Part 2: The Trojans regular season ends on Nov. 18 against UCLA. If the Trojans are fortunate enough to win the Pac-12 South, they would have two weeks to prepare for the Pac-12 title game.

Nostalgia: After reviewing the 2017 USC football schedule, it was also noticed that the regular season ends before the Thanksgiving weekend. Don’t know about you, but it won’t be the same without playing Notre Dame or UCLA right after Thanksgiving.

The trapper: From the perspective, here, the early 2017 trap game will be at Washington State on Sept. 29, a Friday night. With outstanding quarterback Luke Falk returning, the Cougars will be an offensive threat, and the overall program has gotten better under the leadership of Mike Leach. The Trojans are fortunate this game is being played in late September and not late October or the bitter cold of November.

Condensing the schedule: The Trojans have byes this season and that, too, could prove problematic. There is an eyebrow raiser to the Pac-12 schedule maker, as the Trojans play at Cal on Saturday, Sept. 23, and then will have a short practice week to prepare for a Friday night game at Washington State.

Down under: The Trojans will host Stanford in the Pac-12 opener for both teams on Saturday, Sept. 9. Prior to playing the Trojans in their Pac-12 opener, Stanford is expected to play Rice in Sydney, Australia in late August, one week before the start of the season for most major college teams. If the Stanford-Rice game isn’t played in Australia, the game will be played at Rice. That might mean that Stanford could have a bye week before they play the Trojans.

The gauntlet: After the Trojans play host to Stanford, the Men of Troy will face Texas on Sept. 16 and new Longhorns coach Tom Herman, who has SoCal roots. When the Texans travel to Los Angeles, it will be the Longhorns third game of the season. Prior to the Trojans, the lads from Austin will host mighty San Jose State in Darrell Royal-Texas Memorial Stadium on Sept. 9.

More Longhorns: Texas will be making its first visit to Los Angeles since 1967. And who was the USC tailback at the time? If you say O.J. Simpson, you are correct, sir. The final of that 1967 tussle between the two storied programs was No.7 USC 17 and No. 5 Texas 14 before 67,705. It was just O.J.’s second game as a Trojan, and he ran for 158 yards on 30 carries, which also included a two-yard TD run.

More Longhorns – Part 2: For those of you that have rightfully complained about the late kickoff times of USC home games, it should be noted that when the Trojans hosted Texas back in 1967, kickoff time was 8 p.m. PT.

Last add Longhorns: How impressive was USC’s junior college transfer O.J. Simpson? The late legendary Texas coach Darrell Royal told the L.A. Times, “I hope we don’t see anybody with more capabilities, and I don’t think we will.”

Here come the Irish: Based on the ACC football schedule, there was some concern that the Trojans might have to move up their playing date at Notre Dame to early October, but the 2017 schedule shows that the two intersectional rivals will again have their third week in October (21st) collision.

Just wondering: So, which recruit will be swayed to Troy after learning that Adoree’ Jackson is turning pro? Who wants that No. 2 jersey?

The history lesson: Next season will mark the 125th USC football team in school history.

Making the point: This past season, the Trojans defense gave up 24.2 points per game.

Making the point – Part 2: This past season, the average college football team topped 30 points per game for the first time in the game’s history, erasing the record of 29.7 points per game per team set last fall.

Intriguing: So how does it get your juices flowing knowing that when the Trojans travel to Cal on Sept. 23, they will be facing former beleaguered USC defensive coordinator Justin Wilcox, the newly appointed Bears head coach? And ya think that Wilcox will be excited to beat his former employer?

TV time: Are you getting antsy regarding the kickoff time for the Trojans Sept. 2 season opener against Western Michigan in the Coliseum? Since WMU is coming off a Cinderella season (13-1) but entering 2017 with a new coach (Tim Lester), there is interest there. The fact that fans in the Midwest will have a curiosity regarding WMU’s new head coach and the Trojans probably starting the season the in the top 10 or the top 5, this is a game that should be enticing for the sports television market.

TV time – Part 2: All Trojans games will be nationally televised by either the ESPN channels, ABC, FOX, FOX Sports 1 or Pac-12 Network.

For the record: In case you were wondering, Western Michigan plays in the Mid-America Conference.

End of an era: In terms of an elite post-season high school football all-star game and its legitimacy, let me echo the sentiments of others in saying that the losing the U.S. Army as the presenting sponsor of the All-American Bowl is disappointing. The United State Army, which presented the game for 16 years, brought a sense of dedication responsibility, discipline and respect to the game. In other words, it was a game above board.

End of an era – Part 2: So, with the U.S. Army pulling out of the All-American Bowl, will the game continue? And if it continues, will the game no longer be played in San Antonio, which was home to a large military presence? I have nothing against shoe companies sponsoring the game, but the U.S. Army seemed so above the shoe company wars, and player didn’t have to feel an allegiance to one particular shoe company.

In memory: Sad to hear of the passing of former Trojans punter Marty King, a standout kicker on the 1978 USC National Championship team. It seems like whenever the Trojans have won a national championship, one of the key components has been an outstanding punter. Marty, a 1974 graduate of San Jose Bellarmine Prep, was the first-team All-Pac-10 punter in 1978 and later spent time in the NFL with San Diego and Tampa Bay.

The last word: Now that the 2017 schedule is out, have you started planning for the Notre Dame Weekender? Those hotel rooms in the South Bend area go fast and can be pricey. It figures that the game will be shown in prime time on NBC, so start shopping for those “winter” coats.