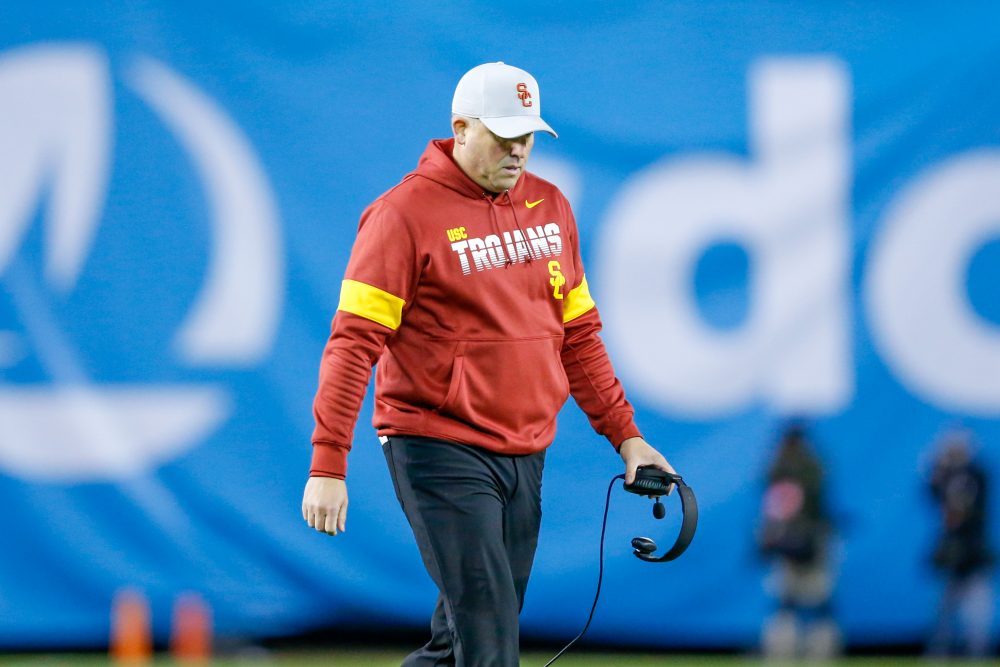 And then there was Clay: With the firing of defensive coordinator Clancy Pendergast and special teams coach John Baxter on Saturday afternoon following Friday night’s 49-24 capitulation to Iowa in the 42nd SDCCU Holiday Bowl, it seems that in the last couple of years head coach Clay Helton (cover photo above) has fired just about everybody on his staff from its original formation from four years ago to desperately try and put a coaching group together worthy of leading the USC football program. The reality now is that the only coach left to change is Clay Helton himself. Yes, the one constant in all the turnover of coaches is the current head coach.

Trivia: Can you name all of Clay Helton’s assistant coaches that have left the program since he became the permanent head coach for a full season starting back in 2016?

Working together: Well, did you find it interesting that Clay Helton was quoted in the press release relating to the firing of Clancy Pendergast and John Baxter as his decision, which was based on consultation with athletic director Mike Bohn? It would appear that this is a first in my memory that an athletic director acts like the general manager of the Trojans football team. I don’t know many D-1 coaches that would go along with that chain of command when it comes to running a college football program.

Clancy the gentleman: I have said it before and I’ll say it again. In my dealings with Clancy Pendergast, he was always courteous and had good media communication manners. Certainly he protected his team by doing a lot of coach-speak, but he was never rude or abusive to the press. If you asked him about an opponent’s offense, he would speak in general terms, but he said enough that would give fans some info on what to expect from the opposition’s offense. I appreciated his demeanor. Was it time for him to go? Yes, I think his term as DC had more than run its course. However, I do wish him the best of luck in his future.

Bathing at Baxters: As for former Trojans’ special teams coach John Baxter, he won’t be remembered by me or much of the media as an example of a coach that knew how to communicate with the media. Most media that I know, including me, found him to be more condescending and arrogant than needed to be. Sometimes he would refer to a non-threatening question as “stupid.” There was always the feeling that he could be anti-media because he was “protected” by Clay Helton. That may have been true, but you knew that he knew later in this season that his days at USC were numbered, and he started being more media friendly. Baxter made a lot of money as a USC special teams coach and got a lot of time from Clay Helton to devote to special teams in practice. His departure was also probably long overdue based on the results the last two years of special teams.

More Baxter: It is almost overlooked that John Baxter was also in charge of coaching the Trojans’ tight ends. Well, maybe they don’t need to be coached since they are rarely used in Graham Harrell’s passing offense.

You don’t know Jack: One of the big rumors currently making the rounds – and I am hearing from more than a couple of sources – is that former Trojans’ All-America linebacker and former NFL head coach Jack Del Rio is in the mix for the Trojans next defensive coordinator. I think Jack would be a wonderful choice in that role. He would bring instant defensive credibility and not doubt toughness both in attitude and fundamentals. No question in my mind that the players would love to play for him. It’s no secret that at one time Jack was very interested in being considered as the next USC head coach, so maybe Clay Helton would not be comfortable with that idea. However, with new “GM” Mike Bohn apparently calling some of the shots, Helton might not have a choice.

Another DC rumor: Since we’re in the rumor stage with Clancy Pendergast now history, another name popping up is current Rams coach Joe Barry, the former Trojans linebacker and coach. He certainly would be an upgrade, and this one also has intriguing aspects to it.

Another yet another rumor: It seems that another juicy rumor is that Clay Helton could be interested in bringing in former Trojans’ All-America linebacker and NFL star Chris Claiborne to be one of the linebacker coaches or as a grad assistant in some capacity. If this rumor is true, the former Calabasas (Calif.) High head coach would be a fantastic edition.

Sense of recruiting urgency: I can tell you one thing, if the Trojans and Clay Helton are looking to make big recruiting splash for the upcoming early February signing period, bringing in Jack Del Rio, Joe Barry, Kris Richard and/or Chris Claiborne would be major upgrades to Clay Helton’s staff and would be well-received by high school defensive stars that have yet to sign for the Class of 2020.

Staying the course: In spite of the avalanche of criticism at both him and the Trojans’ administration, even in a tense SDCCU Holiday Bowl post-media session, Clay Helton remained the same gentleman he has always been and answered most of the media questions to the best of his ability.

Best Helton post-game quote: Trying hard to turn negatives into positives, the best line in Clay Helton’s Holiday Bowl post-game media conference was his assessment for 2020. The coach said, “We’ll make sure we have success in the future. Bright days are ahead.”

Hard to believe: It’s still sinking in that the SDCCU Holiday Bowl loss to the Iowa Hawkeyes was the worst bowl loss since 1948 or two years before I was born. It not only makes me feel mighty old, but it shows you how that should be part of the Clay Helton evaluation.

Who’s counting: Iowa score 14 points off of Trojans turnovers. The Trojans had no points off Iowa turnovers because the Hawkeyes had no turnovers.

Seeing is believing: You may be sick of hearing about the Trojans lack of physicality, but if you watched the four teams on Saturday in the CFP semi-finals, you know how physical football is played at the highest level. And if you think – like Clay Helton does – that the Trojans are ready to make the jump from good team to great team, just remember watching Saturday’s CFP playoff games. If you’re still not convinced the Trojans have a long way to go to be physical and both sides of the line of scrimmage, you weren’t watching Iowa manhandle the Men of Troy.

Better think twice: If Trojans All-pac-12 offensive left tackle Austin Jackson thinks he should go early to this spring’s NFL draft, Saturday night’s Holiday matchup with Iowa stud defensive end AJ Epenesa should make the Trojans No. 73 think twice. After watching Epenesa school Jackson more than Austin would care to remember, the Trojans tackle should think twice before entering the draft. There is still plenty of work to be done.

The tough cookie: Once again, this time in the SDCCU Holiday Bowl, Trojans’ true freshman quarterback Kedon Slovis showed how tough he is after getting whacked around by the physical Iowa Hawkeyes defense. Slovis looked hurt when he was sacked in the first half and his head hit the turf, and then he was knocked out of the game in the second half by that man Epenesa, whose hit affected Kedon’s right elbow. On Sunday, it was announced that Slovis suffered a sprain that was not as serious as it looked on Friday night. He will not need surgery and rehab in the off-season.

Another standout performance: Once again – if healthy – Trojans stud safety Talanoa Hufanga continues to strive for national honors in his future, as he led the Trojans in tackles with 14 against Iowa. Eight of his tackles were solo while six others were assisting. And did we mention he had a sack and twice made tackles for losses?

Nice turnout: Hats off to those Trojans fans that supported their heroes at the SDCCU Holiday Bowl in person. The lower portion of the stadium was goal line-to-goal line cardinal and gold and so was a nice portion of the plaza level. To those that did not go but decided to show your disdain for the way the USC football program is being run, you have total respect here for standing your ground.

Bowl change: A reminder, that next season (2020) the Pac-12 has made some changes. First, the conference title game will be in the new Las Vegas Stadium, home of the Las Vegas Raiders of the NFL, and that the new Las Vegas bowl has jumped past the SDCCU Holiday Bowl pecking order. The third place team in the Pac-12 will go to Las Vegas to play either an SEC or Big Ten team in alternating years. The Holiday Bowl slips down to the 6th Pac-12 team in the pecking order and will play an ACC team.

No shock: So how many of you were “shocked” that Iowa in its first offensive drive in the SDCCU Holiday Bowl ran a reverse to the right side for a TD, a weak spot for the Trojans defense all season? I would have been shocked if they didn’t. The Hawkeyes also completed a reverse pass that completely sucked in the Trojans defense, but the pass was fingernails too long.

The time zone: And what time did you get home from the SDCCU Holiday Bowl and how fast did it take your car heater to warm up in the chilly San Diego night air?

The last word: And a wonderful and Happy New Years to all our loyal WeAreSC readers and followers. Yes, I’ll watch the Rose Bowl Game as a tradition, but here’s a little secret: I’ve never seen the parade in person. Too early for me. 🙁