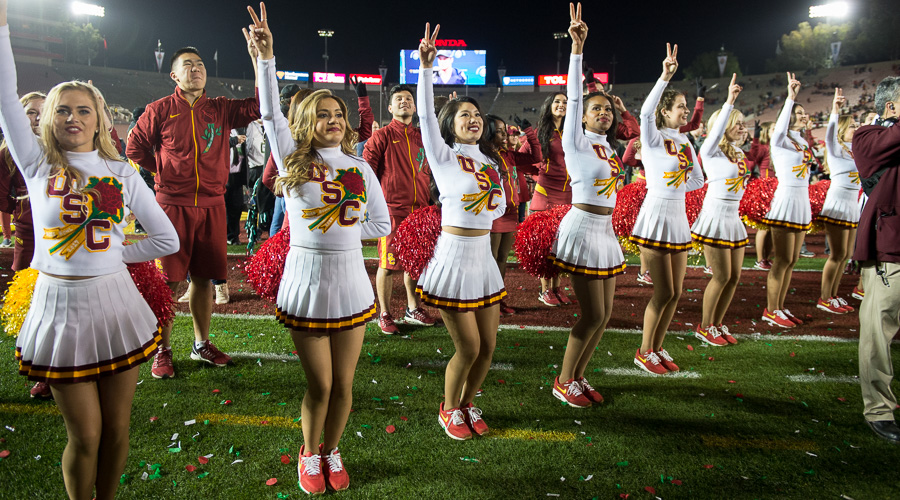 Poll position: Trojans head football coach Clay Helton has found out first-hand just what a Rose Bowl victory means in terms of his own career. As you may have already heard, the likeable coach has been named Grand Marshal for the 43rd Toyota Grand Prix of Long Beach, Sunday, April 9.

Poll position – Part 2: Helton’s responsibility as Grand Marshal will include attending the Verizon IndyCar Series drivers’ meeting, visiting the race teams in their paddock, taking a pre-race hot lap of the track in a two-seat Indy car with driving legend Mario Andretti, greeting the drivers as they are introduced before the race and participating in the parade and pace laps immediately prior to the start of the race (1:30 p.m. PT).

Common sense: Due to an overabundance of various physical maladies, the Trojans did not scrimmage on Saturday. This decision makes discretion over valor just plain common sense. Clay Helton still has two “live” scrimmages (real tackling) at his disposal, and he will use them in the final upcoming two weeks of spring ball.

In the southern mold: Although this may sound to some like blasphemy, those observing coach Neil Callaway’s O-line have commented that this group of Trojan bulldozers are looking more and more like an SEC offensive line, which should come as no surprise since Callaway is a former University of Alabama performer under legendary coach Paul “Bear” Bryant. With all due respect, this Trojans O-line physically looks more like a traditional USC offensive line, but time will tell.

Opportunity knocks: If you ever get a chance to watch Trojans offensive line coach Neil Callaway mentor his linemen, do yourself a favor and make your way over to Callaway’s area. Believe me, it will be well worth the field trip.

It’s conceivable: Clay Helton said this past week that there is a very real possibility that true freshman nose tackle Marlon Tuipolotu could start for the Trojans when the Cardinal and Gold line up against Western Michigan.

It’s conceivable – Part 2: Asked how it might affect the upperclassmen if a true freshman like Tuipulotu started, Helton reiterated that “the best players play at USC” regardless of age or grade level, which should put an extra spark under senior nose tackles Josh Fatu, who saw considerable time with the No. 1 group on Saturday, and Kenny Bigelow, who just starting to go through some limited drills this spring after extensive rehab from knee surgery.

First timer: First-year running backs coach Deland (pronounced Dee-land) McCullough said before taking the job with the Trojans, he had never been to Southern California although he has been to Northern California with Indiana for the Foster Farms Bowl.

First timer – Part 2: Deland McCullough said that while growing up in Youngstown, Ohio, he would watch the Trojans on television and fell in love with the tailback tradition. His favorite USC tailback? Heisman Trophy winner Charles White. McCullough admitted that he has yet to meet White in his brief beginnings at Troy but was looking forward to it.

The student: Growing up, Deland McCullough’s older brother educated him about the famous players and the tradition of USC football. When Deland got the Trojans’ job, one of the first things he did was take a photo of Trojans legendary fullback Sam “Bam” Cunningham and himself and sent it to his older brother. Naturally, the older brother was blown away by the photo.

The pineapple express: Redshirt freshman tailback Vavae Malepeai, a graduate of Mililani High in Aiea, Hawaii, continues to impress with his strength and speed, and one of those impressed is Trojans new running back coach Deland McCullough. McCullough added, “I like tough guys that want to be great. I am a detail freak.” Malepeai worked with the No. 1 offense on Saturday due to injury to starter Ronald Jones (toe).

Scary: Watching quarterback Sam Darnold from the sidelines, you realize that his strong arm is even stronger than you think. No. 14 can really zip it or as they say, “Spin it.”

Hoops oops: Although he returned this week to practice, Trojans head coach Clay Helton finally admitted that junior tailback Dominic Davis had not practiced during spring drills because of a concussion that he suffered playing basketball. Like we’ve always said, basketball is a lot more physical than football because basketball players don’t wear shoulder pads and helmets. (tongue in cheek).

Sobering thought: This week Clay Helton said, “I really believe that we’ll only go as far as the young wideouts take us on offense.”

Self-evident: Sam Darnold will hit anybody that’s open, but it isn’t hard to figure out right now that junior WR Deontay Burnett is about as close as a “go-to” player for Darnold as it gets at this point in time.

Tough break: Trojans’ true freshman linebacker Tayler Katoa tore his ACL during Thursday’s practice and will miss next season. Katoa, who was making stride in learning the linebacker position, reminds that there are hazards in coming in as an early enrollee, but the same could be said of a redshirt senior. It’s just the nature of the game.

Clinic attendees: This weekend, the Trojans held their USC Football Coaches Clinic, a sold-out affair that was comprised of all coaching levels and interested bystanders. Attendees were treated to Saturday’s morning practice.

Clinic attendees – Part 2: One of this weekend’s guest speakers at the USC Football Coaches Clinic was former Trojans linebacker and assistant coach Joe Barry, now the linebacker coach for the Los Angeles Rams.

The predator: Sophomore inside linebacker Jordan Iosefa, filling in as a starter for junior Cameron Smith (neck), continued to impress during this week’s practices. Over the years, we haven’t seen too many Hawaiian D-1 football players from powerhouse St. Louis High not be impressive.

Here come the Irish: A week ago we were at spring training watching the Dodgers at Camelback Ranch in Glendale, Arizona. We sat next to a woman that grew up and continues to live in South Bend, Indiana. The senior citizen said that half of South Bend either loves or hates Irish head coach Brian Kelly. He has been a real lightening rod of controversy.

Here come the Irish – Part 2: With the Brian Kelly reality show, maybe that’s why Notre Dame is offering a season ticket package for its 2017 home season. Well, that’s one way of securing a ticket for the Trojans game at Notre Dame on Oct. 21.

The big cranium: After the first scrimmage, Clay Helton referred to safety/nickel back redshirt freshman Jamel Cook as a “heavy head.” When asked by the media what “heavy head” meant, Clay said it was a compliment because Jamel “can really pop you!”

Reality check: Don’t be shocked if “former” quarterback and now wide receiver Jalen Greene is listed as a starter when the final spring depth chart is released. The fact is that Jalen, a junior, still would be our choice as Sam Darnold’s backup if he was still in the QB competition.

Honorary captains: Since Clay Helton has announced that the annual spring game will featuring “live” tackling, it brings to mind if Helton will name celebrity captains for game. Helton could take a page out of Ohio State’s spring game, which will feature College Football Hall of Fame coach Lou Holtz and 2009 NFF Gold Medal recipient and NIKE co-founder Phil Knight as guest coaches for Ohio State’s spring game on April 15. Holtz was once an assistant Buckeyes coach under legendary Woody Hayes while Phil Knight needs no explanation.

Honorary captains – Part 2: Since USC is considered a “Nike” school, would anybody be shocked if Phil Knight isn’t name an “honorary” coach at the Trojans spring game?

Trojans Raiders: It would be interesting to hear the opinion of former Trojans that played for the “old” Los Angeles Raiders regarding their move from Oakland to Las Vegas, so help me Marcus Allen, Rod Martin, and the late Bob Chandler.

Something new: We hadn’t seen it before, but in spring running back drills, the coaches are using what appears to be a long stick punching bags to prod the tailbacks from trying to knock the ball out or to challenge a ball carrier’s balance.

The last word: During a rotation of drills during practice this week, Trojans junior walk-on linebacker Grant Moore ran over and gave a big hug to what appeared to be his grandparents and that was pretty cool. Grant is the son of former Trojans standout linebacker Rex Moore, the old El Modena High stud.