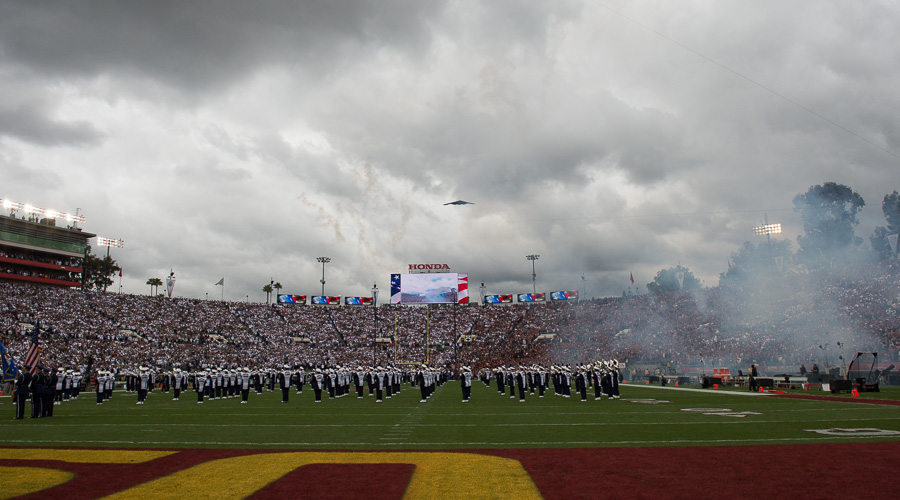 The name game: According to a report in the Sports Business Daily but not yet finalized, it appears that the Coliseum has a new title sponsor in United Airlines. So, for the Western Michigan opener should we expect a United Airlines plane doing a Coliseum flyover after the National Anthem?

The name game – Part 2: One of the interesting side notes to the yet-to-be formally announced partnership between USC and United Airlines is the fact that a former USC grad, Oscar Muniz, is said to have had a major role in the partnership.

The name game – Part 3: The sponsorship deal calls for United Airlines to buy in for $70 million over 15 years. So where will the United logos be placed inside the Coliseum? I expect to see United signage top of all video boards/scoreboards like the 76 gas station signage at Dodger Stadium.

The zinger: As per the impending United Airlines title sponsorship, WeAreSC message board poster Beezenants attempted some Saturday Night Live satire by writing, “I hope they don’t overbook the seating,” a reference to the recent United Airlines incident regarding the removal of a passenger by force.

Delay of game: According to media reports, the new Inglewood Stadium, future home to the Rams and Chargers, will not be ready for play in 2019 but rather 2020 due to the past rain construction delays. All of which probably means more financial assistance for the Trojans renovation of the Coliseum. And the money keeps on coming.

Question: Will Rams season ticket holders have access to purchasing any of the new Coliseum tower suites for 2019 NFL season?

The numbers: For the record, the new Inglewood home of the Rams and Chargers is expected to seat 70,240, which is 7,260 less than the renovated Coliseum.

Media relocation: The media that covers the Trojans will also be affected during the 2018 Coliseum construction. If you want to see how far the new “Tower” extends outwards towards the playing field, we are told the media will have a temporary press box area where the front of the “Tower” begins. It could be a real eye-opener. Let’s also hope the temporary press box has a cover over the top so that on rainy days the media doesn’t end up lighting up like a Christmas tree.

Here we go again: Florida Atlantic head coach Lane Kiffin, the former controversial Trojans head football coach, went back to the future when he offered the son of Trojans offensive coordinator Tee Martin a scholarship. The rub here is that Martin’s son, Kaden, is a 13-year-old quarterback, and didn’t we see this back in the day when Kiffin offered another budding junior high QB named David Sills. And we all know how that all turned out.

Here we go again– Part 2: If Lane Kiffin is still at Florida Atlantic by the time that Kaden Martin is a graduating senior in high school, nobody will be more surprised and probably more disappointed than Kiffin himself. No way should anybody expect The Kiffer to be at FAU by the time Kaden is college ready and nobody know that better than Kiffin.

Still paying: Speaking of Lane Kiffin, it has been reported by the Los Angeles Times, through 2015-2016 federal tax returns, that the former Trojans head coach was paid $2,486,600 as the University continued to pay off his contract. Yikes!

Still paying – Part 2: Then, according to USA Today, there is former Trojans head coach Steve Sarkisian, now the offensive coordinator for the Atlanta Falcons, who reportedly made $3,276,488 before he left the cardinal and gold program. The message: Mama, let your boys grow up to be college head football coaches.

Sun Devil reduction: The Trojans aren’t the only school in the Pac-12 that will or has reduced capacity of its home stadium. Because of it stadium renovation, ASU has reduced its seating capacity from 64,248 to the present 56,232.

The Trojan family: Former Trojans offensive coordinator and Cleveland Browns head coach Hue Jackson announced this past week that his No. 1 quarterback is Cody Kessler, the former Trojans quarterback. So how many thought that Kessler would find that entering the 2017 season it was Cody’s job to lose?

Street & Smith – Part 3: Like all the college football magazines, Street & Smith has its Southern California cover. To the surprise of no one, Trojans QB Sam Darnold and UCLA signal caller Josh Rosen are on the SoCal cover.

Military scheduling: In reading a poster on the WeAreSC message board, a question was raised why the Trojans don’t play any of the service academies (Army, Navy, Air Force)? The answer is that is the Trojans have to schedule far in advance and one of the three non-conference games per season is the annual donnybrook against Notre Dame. Therefore, it’s all but impossible to schedule any service academy in the near future.

Military scheduling – Part 2: So, when was the last time the Trojans played a military academy? To my knowledge, it was 1962 when the Trojans barely defeated Navy in the Coliseum 13-6. The sophomore Navy quarterback? Perhaps you’ve heard of Roger Staubach? As a 12-year-old, it was my first season of watching Trojans football, and I can still remember the tremendous individual performance of the illusive Staubach on that day.

Attendance count: BTW, the Coliseum attendance count for the USC/Navy game in 1962, which turned out to be John McKay’s first national championship season, was 51,701.

The last word: Congratulations to the USC Sports Information Department on being named yet again as one of the “Super 11” SID departments in the country. For the USC SID office, it was its seventh Super 11 award and third straight.