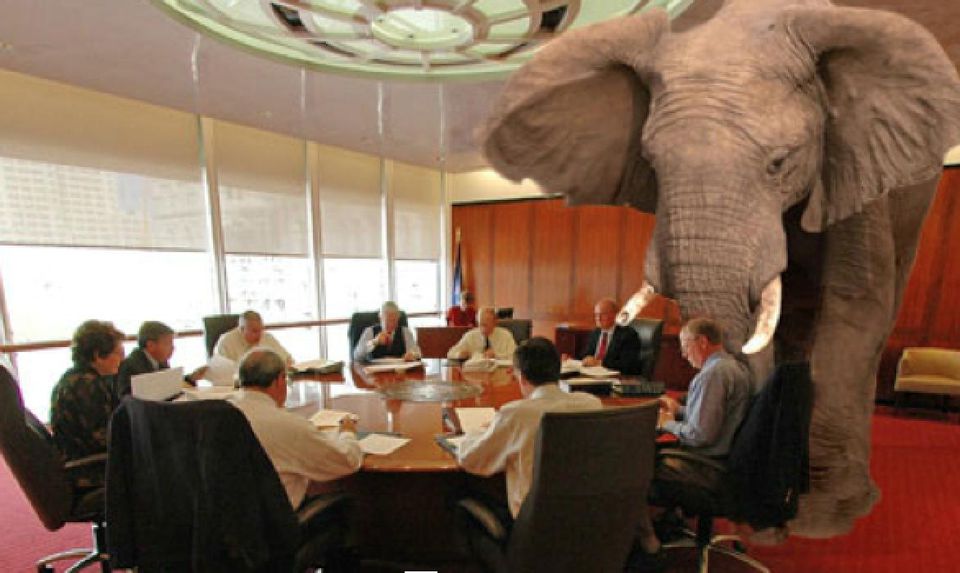 The prologue: With less than one week to go before the season opener against Fresno State and before we begin today’s IMHO proceedings, here’s a recent official Coliseum press release: “Fans attending football games in 2019 at United Airlines Field at the Los Angeles Memorial Coliseum will enjoy the stadium’s completed $315-million renovation, which includes new seats (many with increased legroom), aisle handrails, additional aisles, a new stadium-wide Wi-Fi system, upgraded concession stands, new ticket scanners, TVs and game audio in public areas, new graphics, and a restored mural in the peristyle. There also is a south-side structure housing suites, loge boxes, club seats, a new concourse, a new press box and a rooftop club.”

The prologue – Part 2: Regarding the completion of the Coliseum renovation, USC Athletic Director Lynn Swann said in a press release, “We are excited to unveil the renovated Coliseum to our fans. There will be something new and improved for every fan, enhancing everyone’s experience of coming to the Coliseum and cheering their Trojan football team. We are delighted that the renovation was able to preserve the Stadium’s historic integrity while at the same time creating a state-of-the-art facility.”

The elephant: For those of you that have been in the Scholarship Tower, you were probably blown away by what you saw and for those that have not, try to trust the rest of us it – as legendary USC sportscaster Tom Kelly would say – “Unbelievable!” IMHO, because of the successful Coliseum renovation – attention not so quietly now turns dramatically to Clay Helton, the 2019 team, and the Trojans’ athletic department. Can Helton and his team’s performance and final record (AKA wins) match or approach the plateau set by the Coli renovation, especially the opulent Scholarship Tower? It’s the big elephant in the John McKay Center board room, and everybody from the athletic department to the fans are holding their collective breaths in anticipation. Beginning next Saturday night against Fresno State in the Coli, we’ll all begin to find out, and all Trojan fans are hoping Clay Helton’s football “renovation” is as successful as the Coliseum renovation.

The elephant – Part 2: So, folks, it comes down to this: USC needs put a football product on United Airlines Field that begins to at least approach the riches of the completed renovations. If not, the Coliseum could eventually turn into a white elephant, and those plush suites could begin hanging vacancy signs, which would be a huge loss in revenue. With an average on-field football product, you might as well reduce the current Coli capacity from 77,500 to 57,500. A renovated Coliseum is not why fans pay the big bucks to watch the Trojans football team. They want their storied program to return to being a storied program. Yes, it’s a process, but USC fans want to see their beloved program live up to a recently national poll by ESPN that listed the Trojans as the No. 5 college football program of all-time.

The elephant – Part 3: Remember when Pete Carroll told us his goal was to sell out the Coliseum? Eyebrows were raised. Well, Pete did it with highly successful teams and that might be an understatement. Do you think if Pete was the head coach today and the team was drawing 90,000 per game, the idea of reducing Coliseum attendance would even been on the table? Carroll proved 90,000 could be doable – even in a huge sports market like L.A. If you put a very good to great USC football team on the field, they will come; Ray, they will come. If you do, then it’s not logical to reduce Coliseum capacity from 90,000 to 77,500. However, if the Trojans don’t win big, 77,500 is going to look like trying to fill a 90,000-seat Coliseum. Just win, baby and don’t kill the messenger.

The elephant – Part 4: And don’t think for a minute that athletic director Lynn Swann doesn’t know about this cardinal and gold elephant of comparing the cost of the Coliseum renovation and the success on the field. He retained Clay Helton against all logic at the time, and the two are attached to the hip. It will be absolutely intriguing to see how this whole Shakespearian drama plays out under the new leadership of USC President Carol Folt when she totally understands the lay of the land.

The suggestion box: Speaking of Carol Folt, I would strongly support the new USC President leading the team out of the tunnel for the first game of the season against Fresno State on Aug. 31. Just make sure she is wearing a USC football jersey and allow her to feel what’s it like to come out of the Coliseum tunnel with a storied college football program behind her.

Fire sale: With all the uncertainly leading into the 2019 season and some of the debate regarding an array of football topics, was it surprising that last week USC Athletic Department held a fire sale of sorts for tickets to the opener next Saturday with Fresno State? The fire sale was 20% off a game ticket, and you can draw your own conclusions.

The Garry P Award: While most USC fans remember the late WeAreSC Garry Paskwietz for his vision in creating Internet interest in the Trojans with his highly respected website, Garry P. was deeply instrumental in helping create the Fox Sports West High School (now Prime Ticket) Game of the Week, as far back as 1997. A past Emmy Award winner for his high school work on the telecasts, Garry was recognized by the sports network for his work on the Game of the Week with the establishment and presentation of the Garry Paskwietz Player of the Game Award, which pays tribute to his contributions to the telecasts and high school football. The first award went Friday night to Santa Ana (Calif.) Mater Dei quarterback Bryce Young. No words can really properly describe the effect that Garry had in so many areas of local sports both on television, radio, and on the Internet. To watch Fox Sports West touching tribute to Garry, go to:  https://wearesc.com/first-ever-garry-paskwietz-award-goes-to-bryce-young/

The Garry P Award – Part 2: Garry will be paid tribute next Saturday night before the kickoff at USC’s season opener against Fresno State when there will be an empty press box chair in honor of Garry in the new Coliseum press box, which will be accompanied by a statement by the University and followed by a moment of silence. Of course, WeAreSC will be there to provide coverage of the solemn remembrance.

The new No. 50: A wonderful gesture by Clay Helton and the team in presenting outgoing and legendary band director Arthur C. Bartner with a home cardinal and gold No. 50 jersey for 50 years as the TMB’s storied leader. Dr. Bartner will retire at the end of this football season. Obviously, during one of the home games, Bartner should also be honored by leading the team out of the Coliseum tunnel. A no brainer to me. Maybe against UCLA in the pregame ceremonies honoring departing players and being saluted by going through the Heritage Tunnel?

Remembering Jim Hardy: As mentioned in Friday’s O/NSO, legendary USC quarterback Jim Hardy passed away at the age of 96-years-old. I had the distinct pleasure of knowing Jim and went with him and Garry Paskwietz to dinners at the Pacific Dining Car in downtown L.A. to talk USC football and Trojans athletics in general. Nobody was more devoted to the Trojans, but in the past couple of years he was supremely disappointed at the direction of the football program and the athletic department. He never gave up hope that things would turnaround. With his so many successes in life, one of his favorite personal accomplishments he’d share with all of us was the fact that he also attended more than 80 Rose Bowl games, including all but the first two of Troy’s 34 Rose Bowl appearances. Jim was old school and one of a kind.

Remembering Jim Hardy – Part 2: Jim, a member of the USC Athletic Hall of Fame, was also the eighth pick in the first round of the 1945 NFL Draft by the Washington Redskins. He spent seven seasons as a quarterback in the NFL and threw for 5,690 yards with 54 TDs.  After a stint in the Navy, Jim was with the Rams (1946-48), Chicago Cardinals (1949-51) and Detroit Lions (1952).  He was a member of the inaugural Los Angeles Rams team in 1946 and the NFL champion Lions in 1952.  Jim was named to the Pro Bowl in 1950.  While with the Cardinals, he set an NFL game record by throwing eight interceptions against the Philadelphia Eagles in 1950, a mark that has yet to be broken.  The following week against the Baltimore Colts, he rebounded to throw six TDs.

Herbie predicts: ESPN college football analyst Kirk Herbstreit has his prediction for the Pac-12 Conference. According to Herbie, “The Pac-12 is a little tougher for me. Oregon is legitimate. I can’t wait to see them against Auburn. But I’m going with Coach Petersen in Washington over Arizona State. That South is wide open. I know Utah seems to be the consensus, but I’m going to go with Herm Edwards and Arizona State. I really like (tailback) Eno Benjamin. I like the skill they have, young freshman quarterback, I think they’ll be okay.”

JJ: Hope you all got to read Erik McKinney’s touching story regarding Trojans’ freshman wide receiver John Jackson lll and his famous dad, John “JJ” Jackson Jr (https://wearesc.com/jacksons-show-pride-in-fighting-on/ ), who is returning to the Trojans’ broadcast booth after suffering a significant stroke last winter. His recovery has been nothing short of amazing.

Where are they now – Part 2: If you haven’t been following along, maybe LSU should change its name from Tigers to Trojans. Below is a tweet that LSU and former Trojans’ interim head coach and D-line coach Ed Orgeron sent out. And don’t think that wasn’t aimed at Southern California recruits.

Lott of CFP: You may not be aware, but legendary Trojans’ safety Ronnie Lott is a member of the College Football Playoff committee, which selects the final four teams that will enter the post-season playoff.

The quarterback club: A reminder to all you hardcore football and especially USC fans that the Pasadena Quarterback Club will have its popular Friday luncheon/program – open to the general public – this coming Friday, Aug. 31, at the Pasadena University Club (175 North Oakland Ave, Pasadena, Calif.). Trojans’ head coach Clay Helton will be the guest speaker. Folks are encouraged to get there at 10:45 a.m. to get a good seat, and the program and luncheon begins at 11 a.m.