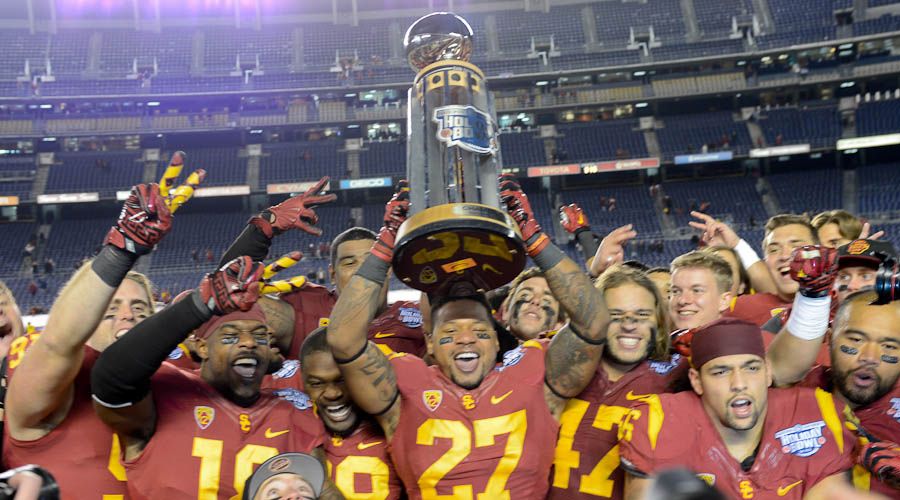 CFP semi-finals: It certainly didn’t take long after Ohio State’s mauling of Oregon for ESPN’s long list of experts to predict their 2015 CFP semi-finalists. The Trojans were the consensus pick to be the end-of-the-season No. 4 seed… and the drumbeat begins.

A reminder: The drumbeat for big success is starting to pickup for the 2015 Trojans, but if you don’t pay attention to the past you’ll be doomed to repetition. Most Trojans fans remember 2012 when the Trojans started the season No. 1 in the land, but quarterback Matt Barkley’s final season didn’t turn out at all like the preseason rankings. A 7-6 season was a hard lesson learned.

Pac-12 reality test: The humiliating loss by Oregon to Ohio State in the CFP title game was tough one for the Pac-12 to take. On one hand, the Pac-12 made it to the title game, but conversely the national championship game results really illuminated the fact the no Pac-12 team can win the biggest one if they aren’t big, fast, physical, nasty, of course, talented.

Run the ball: Steve Sarkisian understands that you can’t get to the top without a physical running attack and Ohio State emphasizes the point.

Critical choice: Given what we saw in the CFP national championship game, it really puts a premium on the selection of the next Trojans offensive line coach. Ohio State’s O-line wasn’t exactly a fearsome fivesome at the start of the season, but their development at the end was quite a remarkable turnaround.

IMHO – Part 2: Had the CFP been intact during the Pete Carroll era, would Carroll have stayed longer at USC? The feeling here is that he was probably one more national title from still returning back to the NFL.

The constant: No matter what the offense and no matter the defensive design, winning at the highest level in football hasn’t changed. It still gets down to blocking and tackling in a physical, violent way.

Farmers field: The announcement that junior wide receiver George Farmer is entering into the 2015 NFL is unfortunate because the kid could have used another season. His frustration over his USC career (health and productivity), watching some of his former Gardena (Calif.) Serra High teammates in the NFL, and family concerns had to play into the decision. We wish George well.

The surprise: There is no question that while there had been rumors throughout the 2014 season that George Farmer was contemplating entering the 2015 NFL draft, the fact he was just starting to be productive in 2014 had to catch the Trojans off-guard with his decision. The Trojans have enough talent to replace Farmer, but George’s draft decision could affect how much more playing time two-way freshman star Adoree’ Jackson gets at wide receiver.

Beware: The Trojans are scheduled to play at Oregon next season, but there will be not quarterback Marcus Mariota waiting for them. The Ducks will still be potent, but there is no way that they will be elite potent breaking in a new quarterback, although the Trojans will be playing the Ducks in November, which will give the new Oregon quarterback plenty of games to get ready for a date with the Trojans.

The bayou: It was only a matter of time before former Trojans defensive line coach Ed Orgeron returned to college football. Coach “O” is now with LSU and can remain with his family in the “Bayou State,” but his heart will always be at USC. It’s a shame that one of the most beloved Trojans coaches is now definitely not returning, although his return to Troy was never going to materialize. We wish him all the luck.

Early signing period: There is increasing interest to have an early signing period for football just like college basketball. I don’t think it’s in the best interest of a player to sign early in most cases because so much can change during and after a football season as it pertains to a head coach and his assistants. However, the counter argument is that if a kid knows for sure he’s going for the academics and the school, it might make sense.

The wild card: It’s still very early, but the wild card along the defensive line will be redshirt freshman Kenny Bigelow, who could end up pushing for a starting spot during the spring. In a perfect world, it figures that the Trojans starting down three heading into spring will be Delvon Simmons, Antwaun Woods, and Claude Pelon.

On the Move: Junior state of Michigan prep linebacker Daelin Hayes, an earlier Trojans verbal for the class of 2016 and who was in Southern California in 2014 briefly to play at local Ventura St. Bonaventure, is now considered the “The Wolverine State’s” top-ranked football player in the class of 2016. Hayes (6-4, 225) is on the move again, having left Detroit Cass Tech and is now enrolled at Ann Arbor Skyline, his fourth high school. FYI, Skyline was 0-9 last season.

The big mistake: Talking to reporters about Green Bay Packers linebacker and former Trojan Clay Matthews, Seattle Seahawks head coach Pete Carroll said, “This was one of the great mistakes that I missed in my coaching at USC, was how good of a player he was.” No argument there, coach.

The focus: For my money, of the incoming freshmen that will participate in the spring, the player to watch is middle linebacker Cameron Smith (Granite Bay, Calif./Granite Bay), who is physical and savvy enough to possibly work himself into the middle linebacker rotation.

The focus – Part 2: A close second to Cameron Smith will be offensive lineman Chuma Edoga (Powder Spring, Georgia/McEachern). The intriguing part of Edoga is where the Trojans new offensive line coach sees the Georgia native – tackle or guard. You can bet that the new O-line coach will make it known that all positions are open, which of course is the politically correct statement.

Further review: I have to admit, I thought that ESPN’s Chris Fowler did a good job doing the play-by-play on the CFP title telecast. The thing about Fowler is that he brings credibility and preparation to the booth.

Say what?: “The new College Football Playoff has far exceeded everybody’s expectations,” said NFF Chairman Archie Manning. With all due respect to Archie, but what planet are you on? College football fans and many on the inside from coaches and players have been demanding a playoff for years like other NCAA sports and it was no surprise or shock the CFP was such a rousing success.

Last score: I thought Ohio State’s last touchdown late in the fourth quarter was classless. Urban Meyer should have had his quarterback take a knee and not try and pile it on. What goes around eventually comes around.

The future: For those Trojans fans that are already thinking 2015 CFP sites. The semifinals will be held on New Year’s Eve at the Orange Bowl and the Cotton Bowl. What will be interesting are the exact kickoff times so semifinals don’t interfere with the evening’s revelry.

Not to worry: Anybody who thinks because next season’s CFP semifinals will be played on New Year’s Eve will hurt or slow down national interest better think again. The games are bigger than what day they are played.

The future final: The 2015 CFP Championship Game will be held on Jan. 11 in Glendale, Arizona.

Duh: The CFP national title game produced an 18.5 overnight rating, making it not only ESPN’s highest rated broadcast of all time but the highest rated program in the history of cable TV, according to Adweek.

Duh – Part 2: And to belabor the point, imagine what ratings and additional money an eight-team playoff would produce.

Passing of a legend: The recent passing of former USC Trojans men’s basketball coach Bob Boyd hit close to home. Boyd, who played and coached at Alhambra (Calif.) High School, the alma mater of your humble WeAreSC columnist and of colleague Steve Bisheff. As a lower division player, Boyd once spoke at one of my Alhambra Moors basketball banquet as head coach at Seattle University.