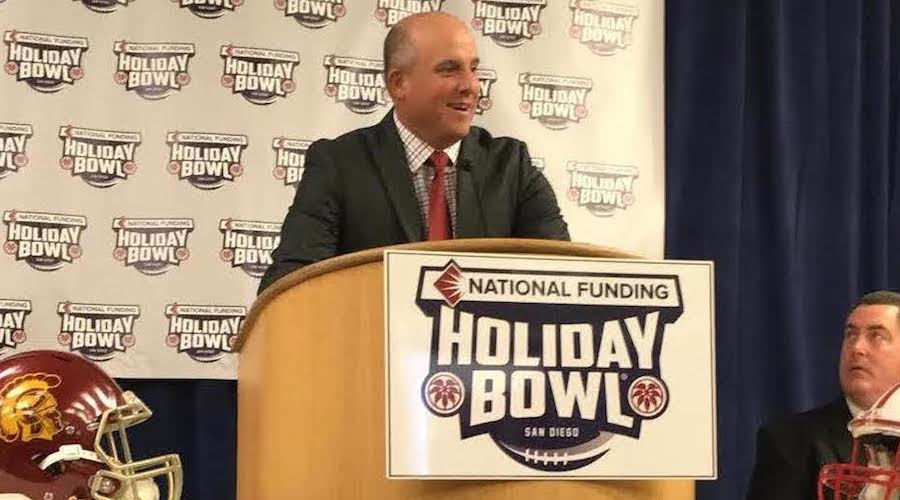 Scoring big points: Clay Helton scores big points here for the hiring of Clancy Pendergast and John Baxter as defensive coordinator and special teams coach, respectively. It shows that Helton again has no problem bringing in adults to help run and bring maturity to his program.

IMHO: I am really starting to like the overall resume of the coaching staff that Helton is putting together. There is a nice blend of age, youth, maturity, and experience.

The reality: With the soon to be officially announced hiring of Clancy Pendergast, the Trojans defensive scheme is likely to have a whole new look and philosophy. Don’t be shocked on the other side of the ball if Clay Helton makes some very noticeable changes to the offensive system (AKA blocking philosophies) and playbook.

The reality – Part 2: As much as Helton may do some rearranging of the offense, the true test will be what new offensive coordinator Tee Martin, with consent from the head coach, play-calls in games.

The reality – Part 3: The hiring of John Baxter as special teams coach will benefit all phases of special teams, and it will be very interesting to see how he sets up the likes of an Adoree’ Jackson into an even more lethal weapon on kick-off and punt returns.

The Nansen factor: With Tyson Helton now the position coach for running backs, you can probably figure out a big question now becomes where does former running backs coach Johnny Nansen figure in the big coaching picture?

IMHO: As rumors to UCLA continue to swirl for current Trojans assistant Marques Tuiasosopo, it wouldn’t be a shock here if there were still comings and goings of the current Clay Helton coaching staff and reassignments within the current staff.

Recruiting boon: One of the byproducts of hiring John Baxter would be his logical return to recruiting Central California, which would include the Fresno area where is greatly respected.

Melancholy: We’re told it won’t happen – or at least that’s the current assumption – but with the return of Clancy Pendergast and John Baxter, it leaves many Trojan fans wishing that Ed Orgeron could return to basically form a semi 2013 Trojans staff reunion.

Memories: While all-star games are sometimes not a true indicator of how a prep All-American is going to perform at the next level, one of the best performance I’ve seen was when Trojans All-America tailback Reggie Bush put on quite a show in the U.S. Army All-America Game.

Awards time: The Los Angeles Sports Council named Trojans head coach Clay Helton the L.A. Coach of the Year. Who else could have won it? Byron Scott of the pathetic Lakers? Former Dodgers manager Don Mattingly for taking L.A. to another unfulfilling Western Division title? UCLA’s Jim Mora for another disappointing UCLA ending to a season? Okay, maybe Doc Rivers for the accomplishments of the Clippers.

That’s the ticket: The Trojans are offering season ticket holders first dibs on getting ducats for the Sept. 3 clash against Alabama in Dallas.

Homecoming – Part 2: The Trojans didn’t really have much choice but to select the Ducks as the homecoming game. Since Colorado (Oct. 8) was already designated as Trojan Family Weekend, that left ASU, Cal, and Notre Dame as the other options, unless you wanted to have a homecoming game on Sept. 10 against Utah State.

Hall of Fame brothers: In case you missed it, Randall Cunningham, the former UNLV star quarterback and punter, will join his legendary USC running back brother Sam Cunningham in the College Football Hall of Fame. A fantastic athlete like Sam Bam, Randall is entering “The Hall” as a punter. Randall’s son, Randall Jr., is a high jumper for the Trojans track team.

I am back: ESPN’s Adam Schefter disclosed last week that former Trojans head coach Steve Sarkisian is “putting out feelers to NFL teams and expressing interest in becoming a QB coach or OC, per league sources.” Wow, that’s quite a recovery

I am back – Part 2: Maybe it’s the feeling of betrayal, the ensuing firing, the lawsuit, but it appears that many Trojans fans aren’t exactly warming to Sark’s legal action against his former employer. In fact, there doesn’t seem to be that many supporters wishing him anything and includes finding an NFL job.

Kiff to the defense: It was not a surprise that during the College Football Media Day leading up to Monday night’s CFP National Championship Game that former Trojans head coach Lane Kiffin spoke on a variety of subjects that included his firing by Trojans athletic director Pat Haden, a retrospect on his coaching experiences, and his support of best buddy Steve Sarkisian.

Leave it to Kiff: Still continuing to be a lightening rod, Lane Kiffin announced to the that Steve Sarkisian was texting him plays and suggestions this season during Alabama games. Of course, Kiffin wouldn’t say if he used them. You have to wonder what Nick Saban’s response was when he learned his OC was getting “tips” during a game from Sark.

The last word: And, no, I have not changed my pick for Monday night’s College Football Playoff National Championship Game. Roll Tide, baby.