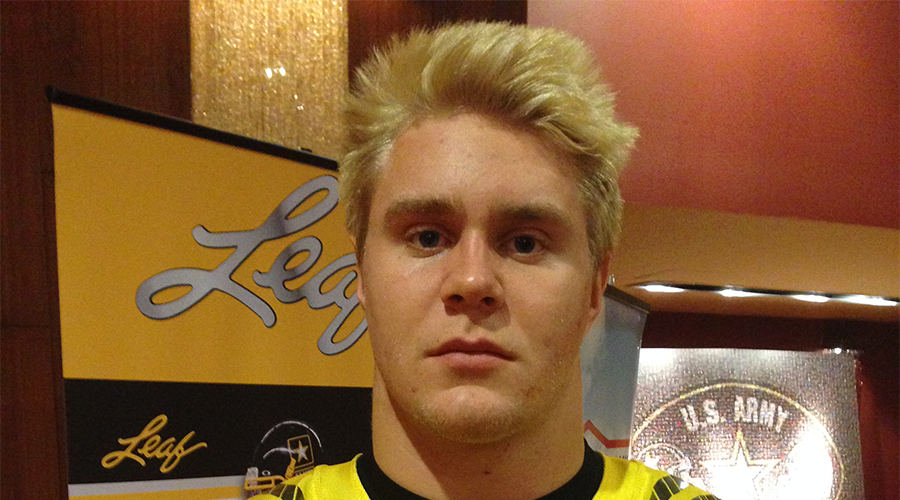 The ghost of Jack Del Rio: Recently inducted into the Trojans Athletic Hall of Famer Jack Del Rio was a tremendous All-America linebacker in his day, long before he came the head coach of the Oakland Raiders. Jack was also an accomplished baseball player, as well. After watching incoming linebacker Porter Gustin (photo above) move around during voluntary player workouts, he reminds me a lot of a young Del Rio.

The ghost of Jack Del Rio – Part 2: Besides both being blonds, Jack Del Rio and Porter Gustin came to Troy as freshmen around 6-4 and 240 pounds, give or take. Both also played baseball, as Del Rio was a catcher while Gustin a pitcher with a reported 93 mph fastball. Sounds like they both could have made great battery mates on the diamond.

Getting defensive: The apparent move of “former” offensive guard Jordan Simmons, a redshirt junior, to the defensive line is surprising but not earthshattering. Or have you forgotten that current senior nose tackle Cody Temple was once a 2011 redshirt center.

More Simmons: When Jordan Simmons attended L.A. Dorsey High as a 2009 sophomore, he made All-L.A. City Division 1 as a defensive lineman.

Baker’s Field: Former Trojans All-America offensive tackle Sam Baker has been released by the Atlanta Falcons, who originally selected him No. 21 overall in the 2008 NFL draft. Baker, now 30-years-old, missed last season with a torn patellar tendon and has played in just four games the past two seasons due to knee problems.

More Baker: I can’t think of a nicer, more polite human being I’ve had the pleasure of knowing at Troy than Sam Baker, the son Dave Baker, former Arena Football commissioner and basketball rebounding king at UC Irvine.

The Baker future: Don’t feel too sorry for Sammy Baker because he mentioned to me along time ago that when his NFL days are over, he’d like to return to his beloved Tustin (Calif.) High and become a football coach.

Harris poll: Trojans sophomore wide receiver Ajene Harris is out for the season with hip surgery. Don’t know about you, but it sure seems that there are a lot of hip surgeries going on in athletics these days. We wish Ajene the best and know upon his return will yet again be a dangerous receiver.

A rose is a rose: That’s what William Shakespeare tells us by any other name it’s still a rose. But don’t tell that to recent Trojans linebacker verbal Jordan Iosefa (Honolulu, Hawaii/St.Louis). Apparently Jordan is his middle name and his first name is actually “Loveni,” which seems far more intimidating than Jordan.

Tight end hobby: As previously mentioned, former Trojans center Cyrus Hobbi has returned to the team as a tight end. He seems to have soft hands and looks considerably trimmer than when he played in the middle of the offense line.

The skeptics: The recent commitments by defensive linemen Keanu Saleapaga (La Mirada, Calif./La Mirada) and Liam Jimmons (Huntington Beach, Calif./Huntington Beach) were met with eyebrow raising by some Trojans fans. However, it should be noted that both players were part of last week’s Trojans lineman camp and showed enough live and in person to the Trojans coaches to warrant scholarship offers.

Early signing: It appears that the chances of an early signing day for football may soon become a reality. For the record, I think it’s a bad idea given the potential changes of head and assistant coaches, and the nature of a young person changing his mind over the course of time.

Early signing: If I was coaching and giving advice, I would tell a player to give a strong verbal commitment because you can always sign later. Of course, a player will be pressured by various universities that the scholarship offer might not be there when he finally decides to commit.

The increase: The 2014 season was the most watched college football season in the history of the Pac-12 Networks, as viewership of live game coverage increased by 39 percent over 2013, and digital viewership for the network more than doubled over last year.

The increase – Part 2: With the above Pac-12 Network numbers, imagine the increase in Pac-12 numbers when the day eventually arrives that the conference network is provided by Direct TV and all those other cable services that are not currently disseminating Commissioner Larry Scott’s network ambitions.

Seating chart: The SEC set an all-time record across all conferences of 7,769,362 fans in 2014, leading all FBS conferences in average attendance for the 17th consecutive year with 77,694 fans per game. Of course you have to take into account that in Pac-12 country there are schools that just are not located either large population areas or fans in that region don’t take college football as a religion.

The final word – The 2014 Pac-12 Championship between Arizona and Oregon drew a 3.7 final rating and 6.0 million viewers on FOX, up 311 percent in ratings and 314 percent in viewership from the game between Arizona State and Stanford on ESPN last year (0.9, 1.5 million viewers). The game was the highest rated and most-watched Pac-12 Championship Game and earned the season’s highest college football rating on FOX. Ya think Steve Sarkisian would like those numbers to give increased exposure to his program?