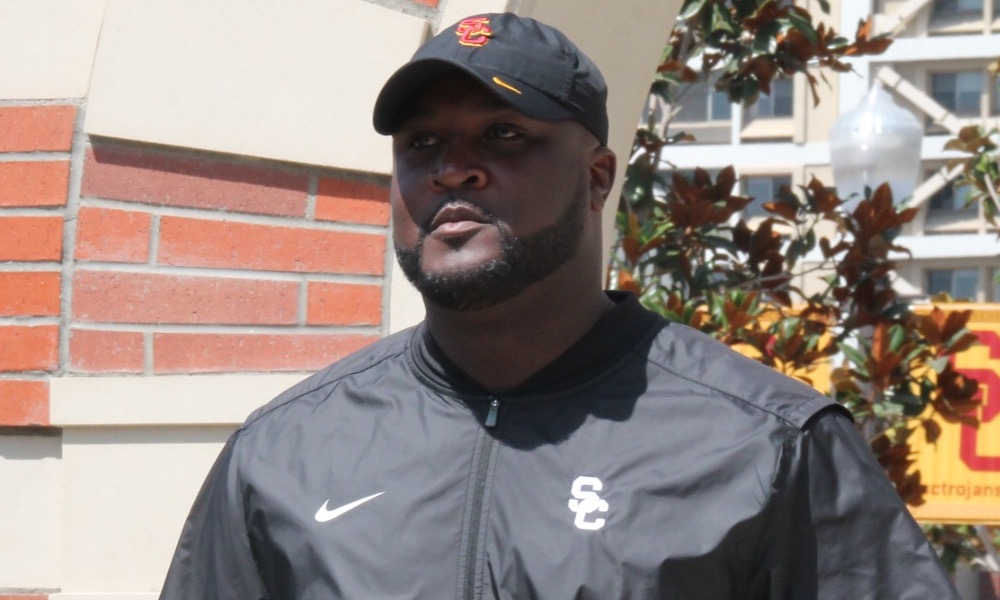 So long, No. 94: Capping off a roller coaster week of cardinal comings and gold goings, Trojans’ junior All-Pac-12 defensive lineman Rasheem Green declared on Saturday that he was entering the 2018 NFL draft. Does it initially hurt the Trojans 2018 defense? Sure it does, but it’s just the nature of today’s game of “three and out” in pursuit of “The League.” However, defensive line coach Kenechi Udeze has done a wonderful job of accumulating talent the last couple of seasons, so the Trojans will overcome with young thoroughbreds, transfers, and coaching.

Stockpile: To put your mind at ease, don’t forget that 2018 returning defensive linemen include junior Malik Dorton, sophomore Christian Rector, freshmen Brandon Pili, Marlon Tuipulotu, Jay Tefele, Liam Jimmons, and Jacob Lichtenstein. It wouldn’t be surprising if there are some position (experimentations) changes into the defensive line come spring ball (Conner Murphy?). And let’s not forget the recruiting class of 2018 with early signees Abdul-Malik McClain and JC transfer Caleb Tremblay, and February signings that should include the likes of Tuli Letuligasenoa (Concord, Calif./De La Salle) and Trevor Trout (St. Louis, MO./Chaminade). And there could be another surprise, as well.

Not gone or forgotten: If you go by the latest hot rumor in ProFootballTalk.com, Trojans’ offensive coordinator and wide receivers coach Tee Martin (photo above) is finalizing a contract extension with the Men of Troy, thus apparently putting the Raiders job to rest. Clay Helton likes to talk of staff continuity as a strength of his program, so the return of Tee is certainly positive news. If the Martin deal is consummated, it reopens attention to who will be the 10th Trojan assistant coach, and who will fill the running backs coaching position?

Gone but not forgotten: Wow, it was very disappointing to learn that running backs coach Deland McCullough, who had only been at Troy for one season and brought a lot of innovation and intensity, has taken a similar position with the Kansas City Chiefs. I can tell you first hand, he is one of the best running back coaches I have seen dating back to the old John McKay and John Robinson (first go-round) days.

The connection: If you hadn’t heard, former Kansas City Chiefs running backs coach Eric Bieniemy was elevated to the Chiefs’ offensive coordinator ship, and Bieniemy wanted Deland McCullough, his former teammate with the Cincinnati Bengals, to replace him. Chiefs’ head coach Andy Reid gave the green light and the rest is history.

The Biggie return: Good news for DC Clancy Pendergast, as starting corner Iman “Biggie” Marshall announced on Friday he was returning to Troy for his senior season. The intrigue, however, to Marshall’s decision is whether Iman will be moved to “strong” safety in spring ball, a position many have long advocated based on his athletic and physical profile.

Hand in hand: There is little question that the chances of Alabama defeating Georgia for the national championship were greatly enhanced when Crimson Tide coach Nick Saban replaced starter Jalen Hurts with true freshman Tua Tagovailoa to start the second half. The irony for Trojan fans is that Tagovailoa once appeared slotted for the Trojans before Steve Sarkisian was relieved of his duty. Yes, recruiting matters, but so does coaching.

The challenge: If the Trojans are going to return to the proverbial “next level,” it all starts with physical offensive and defensive line play. That physical direction starts with recruiting, but maybe Clay Helton’s offense line is predicated more on finesse blocking than sheer physical power. The Trojans have almost always had outstanding skill players, but then again, I am preaching to the choir.

The reality: With the current state of the offense – specifically pinpointing the offense line philosophy and technique – the Trojans could conceivably continue to win future Pac-12 titles. However, if the goal is national championships – as stated by Clay Helton and expected by athletic director Lynn Swann – then there will need to be a major upgrade in recruiting, scheme, and philosophy as it pertains to the O-line…if the Men of Troy are going to go head-to-head with teams like Ohio State and Alabama.

Sabin factor: How much will Nick Saban’s decision to bench his starter, Jalen Hurts, in favor of a true freshman have on Trojans’ head coach Clay Helton, as he eventually decides who will be his quarterback before and during the 2018 season? Yeah, Sabin waited to the biggest game of the college season to do it, but boy that takes big cantaloupes to make that decision.

The excitement factor: You’d have to think that in watching true freshmen quarterbacks Tua Tagovailoa and Georgia’s Jake Fromm in the national championship game, it must have raised the excitement and confidence level of Trojans’ incoming quarterback JT Daniels.

On the spot: While the news was rather low key yet curious, unofficially promoted “interim” quarterback coach Bryan Ellis to fulltime quarterback coach will place the young assistant (29) well under the microscope, especially now that Sam Darnold has moved on to the NFL. Ellis, yet another former Western Kentucky assistant on Clay Helton’s staff, is strongly rumored to have contributed play calling against Ohio State in the Cotton Bowl, a game in which the Trojans scored one touchdown against a tough Oho State defense. With JT Daniels arriving in the summer and the return of inexperienced quarterbacks Matt Fink and Jack Sears, it’ll be interesting to watch the development of the quarterbacks under Ellis.

On the spot – Part 2: Of course, the promotion of Bryan Ellis also puts Clay Helton on the spot, but remember that Clay rarely misses the opportunity many times to describe himself as “a quarterback coach by trade.”

A legend passed – Part 2: Keith Jackson loved USC football and didn’t care who knew about it. If the heart and religious soul of college football currently resides in the Southeast Conference, the late Georgia native bridged the passion for college football in the South to all corners of our country, whether it be Happy Valley, Ann Arbor, Lincoln, South Bend, Seattle, Austin, and you-name-it.

A legend passed – Part 3: Ironically, as many college football games and championships as Keith Jackson called, one of his greatest broadcasts was his last game, the Trojans’ gut-wrenching, heartbreaking 41-38 loss to Texas in the 2005 BCS title game in the Orange Bowl.

A legend passed – Part 4: Anybody who ever heard Keith Jackson call a college football game probably has their favorite. One of my all-time favorite Jackson calls was the 1974 USC/Notre Dame game from the Coliseum, better known as “The Comeback.”

A legend passed – Part 5: As a tribute to Keith Jackson and his 1974 call of “The Comeback,” sit back, relax, and enjoy his broadcast of one of Troy’s greatest games:

A legend passed – Part 6: And, yes, in Keith Jackson’s broadcast of the 1974 USC/Notre Dame classic, that’s WeAreSC’s defensive analyst Kevin Bruce’s name being called by “Mr. Whoa Nellie.” What a memory and an honor for No. 50. FYI, Jackson is credited with nicknaming the Rose Bowl, “The Granddaddy of Them All” and Michigan Stadium as the “Big House.”

The renewal: It didn’t take long after the Cotton Bowl for the Trojans to send out season ticket renewals. Two public season tickets without any donation to the Trojans’ athletic fund runs slightly over $1,000.

An early look: In ESPN columnist Mark Schlabach’s early 2018 preseason rankings, Schlabach has the Trojans ranked No. 15. The highest ranked Pac-12 team is Washington at No. 8.

The shrine: If you’re a Nico Falah fan, there’s good news that the senior center has been invited to play in the 93rd West vs West Shrine Game.

Job opportunity: If you’re a USC student and want the thrill of being part of the Trojans’ football program, you might want to consider being a student manager for the 2018 football team. Some of the perks are road games travel, watching games from the sideline, and getting free Nike gear. All that’s required is a strong work ethic and being a full-time student. If you’re interested, email Sam Salerno: [email protected].

The last word: Much attention is being paid to the adjustments and movement within Clay Helton’s coaching staff, but former Trojans head coach Pete Carroll is making some big Seattle Seahawks news in revamping his staff after a disappointing season (9-7). On Wednesday, Carroll fired offensive coordinator Darrell Bevell and offensive line coach Tom Cable. Carroll, acknowledged more for his defensive expertise than his offensive acumen, is also known for firing or reassigning offensive coaches, even if they are successful. Who can forget when Pete “demoted” Norm Chow as his offensive coordinator after the Trojans thrashed Oklahoma, 55-19, in the 2004 BCS title game in the Orange Bowl, so help me Lane Kiffin.