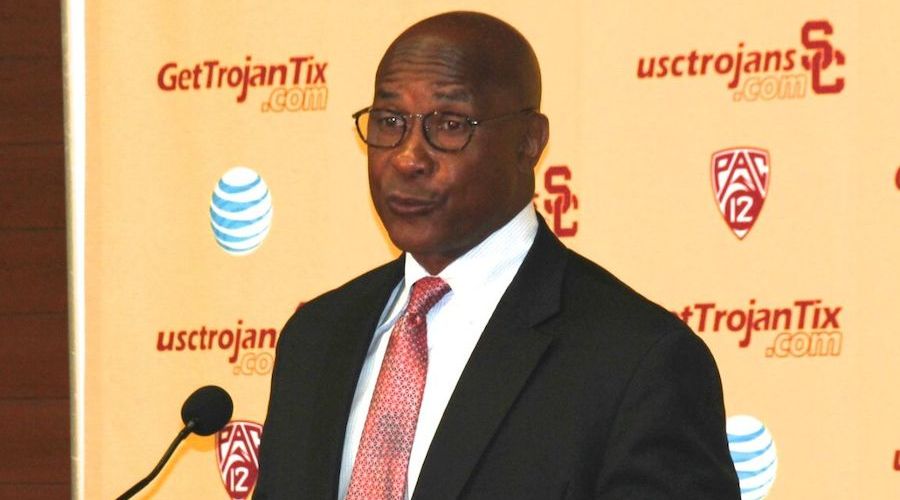 The decision: Whether you agreed or disagreed with USC athletic director Lynn Swann’s (photo above) highly unpopular decision to bring back head coach Clay Helton for 2019, there’s near unanimous agreement things would have been much different today in the world of USC football if Swann had gone in a new head coaching direction after the 2018 season.

The mandate: To be polite and redundant, right now the USC football program is a mess of its own making, and it’s Lynn Swann’s responsibility, duty, and paycheck to get this legendary and storied football program, – one that he contributed to as a player and now as the university’s AD – out of this very public and embarrassing abyss.

The communications director: The lack of communication from Lynn Swann to the Trojans nation is deafening. How about a State of Troy email or video to explain things or at the very least give an update/pep talk? The problem is that Swann, a former Pennsylvania governor’s candidate, is currently challenged to soothe an angry Trojans nation, an extremely loyal fan base that are not idiots and will cut through any political jargon or  “coach-speak.” In fact, many senior USC fans watched Swann play his collegiate days at Troy. Those older age fans especially yearn for the day when the Trojans dominate again and are not distracted by dysfunction in the current football program, which all seems so unnecessary.

Loyalty: It would be fascinating to hear Lynn Swann rally the cardinal and gold masses, which still haven’t forgiven him for not only retaining Clay Helton, but how he handled the Coliseum renovation video message to season ticket holders – basically telling season ticket holders in no uncertain terms that they should suck it up, back the program, and be good little Trojans.

The comparison: The local and national public relations beating that Lynn Swann continues taking probably rivals any hard hits the former All-American and All-Pro received in college and/or the NFL.

Familiarity: Lynn Swann is not a quitter. He’s mentally tough, has basically lived a charmed life on and off the playing field, and has been a winner in most of his ventures. Hmmm, sounds a lot like the previous Trojans’ athletic director.

The Haden effect: As great a quarterback as Pat Haden was at USC, he will now always be remembered as the athletic director who left in controversy and disgrace, and the guy that allowed Lane Kiffin to coach one too many seasons, gave Steve Sarkisian too much leeway, and then hired “interim” head coach Clay Helton for fulltime status. All of which begs the question: Is it possible that Lynn Swann eventually supersedes Haden’s infamous achievements?

About that plan: As things stand today, the Trojans attempt to have a rebuilding plan that would be comparable to the one Notre Dame and Brian Kelly used to resuscitate his dying program not that long ago doesn’t even compare. One hates to belabor the point, but Kelly made large radical changes in personnel, yet thus far the Trojans have not remotely even come close to executing the Irish plan.

Strength and conditioning: Many Trojan fans point the finger of anger at Trojans’ strength and conditioning, specifically the linemen on both sides of the ball, on S&C coach Ivan Lewis. However, Lewis is supposed to be told by the football leadership what type of body emphasis is needed for the type of offensive and defensive that is conducive to the schemes. Is it strength? Is it explosion? Is it agility? Is it weight? Is it mental toughness? Is Lewis being judged unfairly at the moment?

The unemployment line: Remember Pete Carroll’s celebrated strength and conditioning coach Chris Carlisle, who was with Coach Charisma both at USC and with the Seattle Seahawks? Well, the respected S&C coach was fired this week by Carroll after an association that began in 2001 and carried on for some 18 seasons. Believe me, there is a side to Carroll that is as cold blooded as anybody.

Todd job: Former Trojans running back coach and the center of a continuing legendary legal battle with the NCAA, Todd McNair will be joining the Tampa Bay Buccaneers staff as running backs coach. Todd played for new coach Bruce Arians at Temple and Kansas City and coached with him in Cleveland (2001-2003) before coming to Troy.

The positive: Legendary Trojans safety Troy Polamalu has been elected into the Class of 2019 College Football Hall of Fame. In a recruiting generation that places so much emphasis on 5 and 4-star prospects, Polamalu was considered a 3-star when he arrived at USC out of Tenmile, Oregon. By the time No. 43 had completed his stellar career, his name and hitting prowess was put at the same level as current Trojans’ College and Pro Football Hall of Fame icon Ronnie Lott. Enough said.

The positive – Part 2: Troy Polamalu becomes the 44th inductee with USC ties, including 33 players, in the College Football Hall of Fame. A Trojan has been elected into the Hall in 13 of the past 20 years, a tribute to the type of talent that has passed through Heritage Hall and the John McKay Center no matter who is coaching.

Giving back: Troy Polamalu and his wife established the Troy & Theodora Polamalu Foundation, which has raised millions for charity. Paying tribute to his American Samoan heritage, Troy supports the Fa’a Samoa Initiative, set up a medical clinic in Samoa, and serves on the board of the Polynesian Football Hall of Fame, of which he is an inductee.

Moon over Miami: In case you missed it, former Trojans safety Bubba Bolden, who not long ago was reinstated back into USC academically if he so chose, has decided to take his talents down to South Beach and the Miami Hurricanes.

The waiting game: Many Trojan fans are holding their breath to see what recruiting fallout will take place after Kliff Kingsbury went to the No Fun League. Case in point was the recent verbal by 5-star receiver Kyle Ford (Orange, Calif./Lutheran) who told a live national television audience at the All-American Bowl before Kingsbury made his decision that he was committing to the Trojans. So far, no word from Ford on keeping his verbal, but beware of the Oregon Ducks. We’ll find out down the road when Ford signs during the February signing period.

Above and beyond: Decade after decade, the big USC games have mostly been accompanied in the air by the Goodyear Blimp. To celebrate its legacy in the sport, the National Football Foundation and College Hall of Fame will induct the Goodyear Blimp as an honorary member of the College Football Hall of Fame. The blimp will be the first non-player or coach to be inducted.

Above and beyond – Part 2: As a history lesson, what started as a request from network television to provide aerial coverage for the 1955 Rose Bowl Game telecast, which featured the Trojans and Ohio State, the Goodyear Blimp has turned into a long-standing commitment to college football coverage. Since then, the blimp has covered more than 2,000 games from the Rose to the Cotton Bowl and everything in between. For players and fans, the blimp has come to signify the magnitude of games.

Herbie speaks: Regarding the Goodyear Blimp, ESPN analyst Kirk Herbstreit says, “I’ve been lucky enough to both play and broadcast underneath the shadow of one of sports’ biggest icons, and each time it’s special. For me, playing under the blimp felt like a payoff for the hard work that goes into game day, so I’m excited it’s getting recognized for its contributions to college football.”

The last word: Have you been distracted with all the Trojans coaching and recruiting happenings that you’ve forgotten about the ongoing Coliseum renovation? Here’s the latest real time camera view on the Coliseum renovation project: https://app.oxblue.com/open/usc/lacoliseumrenovation