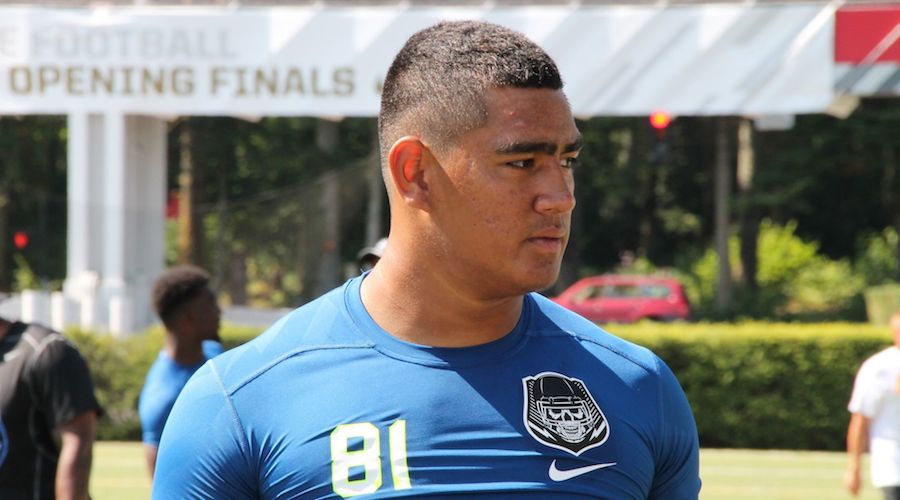 The big coverage: While WeAreSC will be providing its own exclusive coverage of signing day on Wednesday, the 11th annual ESPN National Signing Day coverage will feature exclusive programming across five television networks, on-site reporting at 15 college campuses, at least 20 streaming options on ESPN3 and WatchESPN, hourly updates to ESPN.com’s Recruiting Nation Class Rankings, and 13 live on-air recruiting commitments. Does that satisfy your recruiting hunger?

The big push: With their entire coaching now staff in place, Clay Helton’s team gave it one final recruiting push this weekend. Of course, welcome to all those out-of-state recruits to “sunny” Southern California where the weather is always picture, postcard perfect. Okay, not always perfect, so pardon me while I try to find my umbrella.

The big recruit: There may no bigger recruit this weekend than Concord De La Salle TE/DL Devin Asiasi (above photo), who once appeared to be a Trojans lean until his lead recruiter, Marques Tuiasosopo, headed across town to join the Dark Side. Clay Helton’s closing power is going to be put to the test.

The big barometer: A things stand today, it would be fair to say that Devin Asiasi is the type of recruit than can make a recruiting class and not far behind is Long Beach Poly super corner Jackie Jones.

BTW: Also along for an official this weekend is Devin Asiasi’s defensive line teammate Boss Tagaloa, who is said to be a UCLA lean. This all sets up for one big tug of war and isn’t this a great example of what makes recruiting so fascinating and at the same time nerve wracking. Needless to say, if Helton and gang can get a two-fer signature from Asiasi and Tagaloa on Wednesday, rejoice. If not, keep sharp objects away from Trojans recruitniks.

IMHO: Like others, I have a strong sense that No. 1 defensive tackle Rashan Gary (New Jersey) is a done deal with Michigan. I also have the same feeling with corner Jackie Jones being a Trojan. And, boy, do the Trojans need defensive corner help.

The mysterian: Rarely do centers receive a lot of publicity, but former Trojans All-America center Ryan Kalil figures to get his share in the Super Bowl 50 build-up this coming week.

The big FYI: You can watch a number of former Trojans like former defensive lineman Jurrell Casey, linebacker Clay Matthews, and offensive tackle Tyron Smith in Sunday’s NFL Pro Bowl, which will be shown Sunday on ESPN at 4 p.m. PST. Quarterback Carson Palmer and center Ryan Kalil were selected but will not play. Palmer is injured while Kalil, of course, is playing in Super Bowl 50.

OCD: Don’t know about you, but I’d still like to know why it took so long for Kenechi Udeze to be officially named the Trojans defensive line coach. One rumor is that the Trojans were looking at Alabama defensive line coach Bo Davis, who is making a reported $475,000 per season with two seasons remaining on his contract. Davis has been credited with making the Crimson Tide defensive lines into one of the country’s finest.

The big wake up: If they didn’t figure it out in Holiday Bowl practices, new Trojans D-line coach Kenechi Udeze has made it clear he is a demanding coach and leave your excuses at the door. Udeze’s work ethic, expectations, and demands for production were honed by his mentor, former legendary Trojans defensive line coach Ed Orgeron, who once said his biggest coaching strength was “I make boys into men.”

Preferred walk-on: The Trojans might be getting a preferred walk-on quarterback in California state championship Mission Viejo High QB Brock Johnson, the grandson of legendary MVHS head coach Bob Johnson and son of former Michigan State quarterback Bret Johnson. Brock is deciding whether to accept the Trojans walk-on invitation or accept an offer from Georgetown.

Numbers game: When Cody Kessler was measured at the Senior Bowl, he was listed at 6-foot-1, 225 pounds. Are you more surprised by his height or his weight? As for his Senior Bowl performance on Saturday, Kessler was 4 of 10 for 45 yards and a 1-yard touchdown run.

The take: One of the more interesting local draft stories will be that of former Trojans fullback Soma Vainuku, who was underused as a fullback but made his mark on special teams. So an explanation will be due if Vainuku gets drafted and makes a significant mark as an NFL fullback, although the fullback, too, is also a dying breed in pro football. Vainuku showed NFL scouts his “special” stuff this past week at Senior Bowl practices in Mobile, Alabama.

Super honor: Trojans football legends Ronnie Lott and Lynn Swann each have won four Super Bowl rings, so it was fittingly announced that old No 42 and No. 22 are part of the Super Bowl 50 Golden Team, which was selected by the Hall of Fame voters. Of the 26 players picked, only Charles Haley (49ers and Cowboys) can claim more Super Bowl victories than Lott and Swann. Haley was a five-time Super Bowl winner.

Bambi: You know you’re a Trojans historian if you remember a Trojans fullback whose nickname was Bambi. Give up? His name was Mike Hull, a very speedy but un-Bambi like 6-foot-4, 230-pound fullback in the I-formation, who played from 1965-67. Part of the 1967 USC National Champions, he was also a first round pick of the Chicago Bears.

On Wisconsin: Former Trojans defensive coordinator Justin Wilcox has been hired as the DC at Wisconsin, replacing Dave Aranda who moved on to the DC position at LSU. Maybe Wisconsin athletic director Barry Alvarez knows something that Trojans fans don’t know about Wilcox. Intriguing.

On Philadelphia: Former Trojans defensive line coach Chris Wilson who was recently hired by Missouri is already saying goodbye to the Tigers after accepting the DL coaching for the Philadelphia Eagles. Go figure. There was a lot of eyebrow raising from the Trojans football community regarding Wilson’s move to the NFL.

Coliseum statues: It has been said here a number of times that it would be classy to put larger than life statues of great Trojans athletes outside the perimeter of the Coliseum. FYI, Oregon has unveiled a 1,000-pound, 8-foot bronze statue that pays tribute to its mascot, the duck.

Renovation competition: While Trojans fans are waiting not so patiently for Coliseum renovation, Oklahoma is in the midst of the first phase of its stadium renovation project. It’s all about competition.

The last word: So just what excuse are telling your boss for your absence on Wednesday, which just happens to be National Letter of Intend Day?