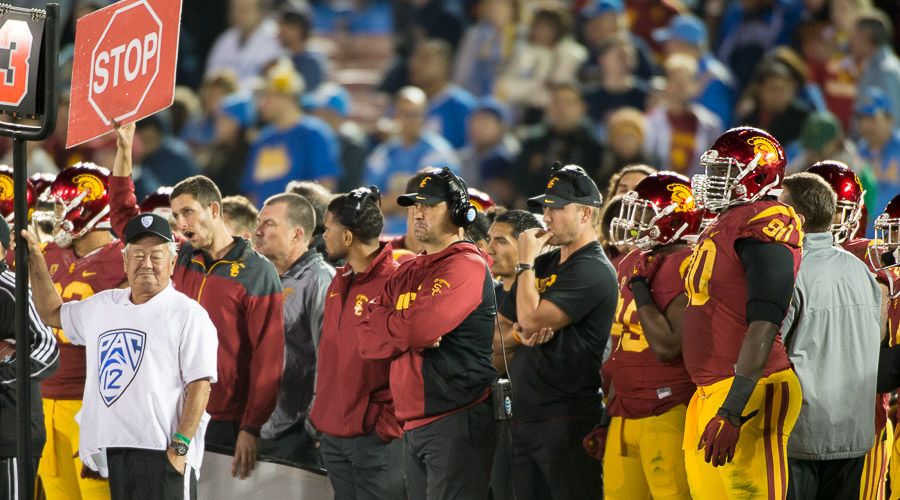 The barometer: The Trojans are the Pac-12’s media’s pick to win the conference, but you’ll know the USC Trojans are truly back in the national picture when fans across the country don’t pause for a second that USC could also stand for Steve Spurrier’s University of South Carolina.

The pressure cooker barometer: Although somewhat expected, the Pac-12 media voting of the Trojans to be the conference champion means the stakes just got a little higher for Steve Sarkisian – as though they weren’t already high enough -to prove he’s the right man for the Trojans job.

The personality barometer: Think what you want about Steve Sarkisian, but at Pac-12 Media Day he again reinforced a charismatic, friendly, and engaging personality.

The memory barometer: The last time the Trojans were picked to win the Pac-12 was 2012. The Men of Troy have been the preseason choice every year from 2003 to ’09. But, of course, we all know about preseason rankings.

The confidence barometer: In a recent interview on ESPN, UCLA coach Jim Mora was discussing how his team has to beat the teams that follow his club’s victories over the Trojans. In the interview, Mora said “when” the Bruins beat the Trojans, his guys also have to beat teams that follow their victory over the Men of Troy like Stanford. Guess you’ll have to decide if “when” means 2015 or if “when” is used in general terms. I think Mora means the latter…I think.

The waiting game: So, Trojans fans still must continue to wait to find out if tight end Jalen Cope-Fitzpatrick will be eligible in the fall. I guess better late than never, but never seems like a distinct possibility.

The waiting game – Part 2: Guess the same Cope-Fitzpatrick situation in terms of will he return applies to former tight end Bryce Dixon, who is said to be appealing his student conduct removal from USC. Needless to say, Sark would love to have both players return, but holding your breath seems to be the best option at this point.

Scary revelation: On their defensive dominance over the Trojans offense, according to UCLA linebacker Bruins linebacker Deon Hollins at Pac-12 Media Day, UCLA defensive coaches “don’t come in (against USC) with a regular game plan. (The coaches have) a very good grasp of their offense and a very good grasp of their (USC) tendencies. Some of the things they like to do, sometimes we know … before they even knew it.” (Gulp)

In the genes: Former star offensive tackle Lincoln Kennedy, an 11-year NFL veteran has joined the Pac-12 Networks as a football analyst. Kennedy is the biological father of Trojans starting right tackle Zach Banner. It should be interesting when Kennedy is asked to evaluate the Trojans offensive line.

Mistake corrected: The NFL avoided a huge mistake by now letting Junior Seau’s daughter, Sydney, speak on behalf of her late father at his Hall of Fame induction in Canton, Ohio. The NFL was heavily concerned a family member would detract from Seau’s induction by commenting on his passing, as it pertains to the physical toll taken by playing in the NFL. Give the NFL some credit for reversing its previous position.

Round every corner: I have never seen any Trojans tailback turn the corner in practice quite like Reggie Bush. But the more film I see of freshman tailback Ronald Jones, the more I see some Bush similarities. If anyone should know how to use Jones like Bush, you’d think it would Steve Sarkisian, who has first-hand knowledge.

Round every corner – Part 2: In watching more video on Ronald Jones, another similarity to Reggie Bush is Jones ability to reverse direction and go back across the field just like Bush. When Jones puts on more weight to his 185-pound frame, he could be the Trojans next superstar back.

The comparison: The Pac-12 is taking votes on the conference’s All-Century team, and there are many younger scribes that would put Reggie Bush on the team ahead of former Trojans Heisman Trophy winner O.J. Simpson. Having seen both play extensively, I still contend that Simpson is the greatest running back in USC football history.

Got ya covered: Pac-12 Networks will televise a network record 17 live football games in the first three weeks of the 2015 season, with nine of 12 Conference teams showcased.

Before and after: A one-hour Pac-12 Football Pregame Show will precede game day each week from the Networks’ San Francisco studios. At the end of each Saturday, Pac-12 Final Score will provide highlights, recaps and analysis of all the action around the college football landscape.

Seeing is believing: Hard to believe that last season Utah beat both the Trojans and UCLA.

Cover boys: Sports Illustrated has come out with its College Football Preview edition, which features the Trojans Cody Kessler, Auburn’s D’Haquille Williams, TCU’s Trevone Boykin, and Ohio State’s Ezekiel Elliott. Does that mean that all four schools and players now have the infamous SI curse?

Recruiting barometer: Commitments from high school juniors and younger almost have to be taken with a grain of salt. However, Class of 2017 quarterback Tate Martell (Las Vegas Bishop Gorman) told Bleacher Report he plans to make a decision on his future college between August 10 and August 20. Many are predicting the Trojans, and a big factor to consider is Martell once committed to Washington when Steve Sarkisian was the head coach of the Huskies.

The aging process: You know you’re getting older when you learn that former Trojans All-America linebacker Keith Rivers has retired from the NFL. My, oh my, how time flies.

Chow time – Part 2: In comparing Max Wittek to Carson Palmer, Chow told the media, “He reminds me a lot of Carson.  They have tremendous physical strength, both very accurate.  They have great anticipation.  He’s a proud young man that wants to get to the next level.  He’s a gym rat, he is always in there studying tape, so all of that is very positive.”

Chow time – Part 3: It wouldn’t be a reach to say that Chow’s future could be tied to Wittek’s productivity on the field for Hawaii.

The final word: If you could wave a magic wand, who is the one coach in the last 50 years you would have liked to have seen hired by the Trojans, who was never considered or hired, to be its head football coach?