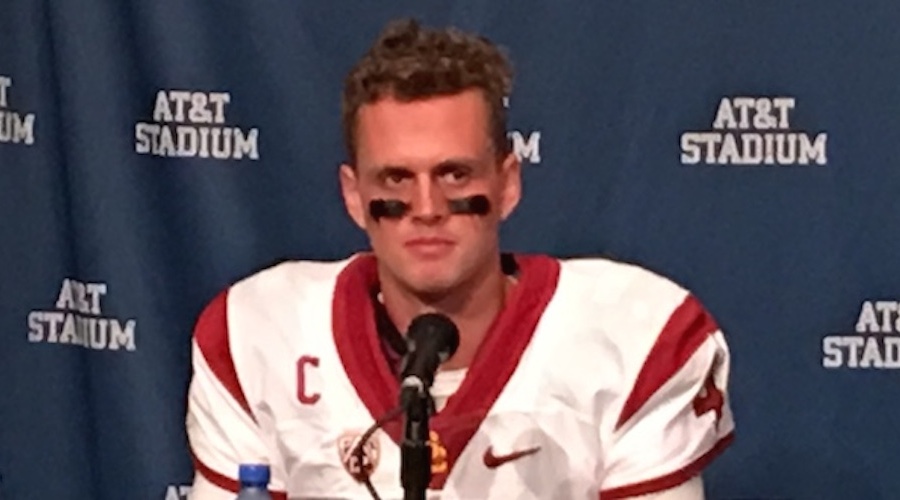 The evaluation: Your heart wanted to think upset and your mind was fearful of a rout by No.1 Alabama, and for a quarter and a half your heart was winning. However, the Trojans lost their poise on special teams and like a dam opening up, the Crimson Tide crushed the Men of Troy 52-6. Unfortunately, I was there in 1966 when Notre Dame steamrollered the Trojans 51-0 in the Coliseum. After the game, legendary coach John McKay told his team, “Gentlemen, we will never lose a game like that again.” Will current USC head coach Clay Helton guarantee his team and the massive Trojans following the same response?

The evaluation – Part 2: No excuses for this devastating loss. The lopsided defeat was probably worse than your worst nightmare and you hate to use the word embarrassing, but it was. I think most of the Trojans team never gave up, but they were obviously overwhelmed and whipped in every area completely, physically and mentally. The question that many fans and former USC player are asking is did this play with heart when the going got tough? You’d probably get a spilt vote on that analysis.

Offensively speaking: The Trojans didn’t really lose badly because of quarterbacks Max Browne (photo above) or Sam Darnold. They lost because their offensive line couldn’t move the ball on the ground and they had extreme difficulty in pass protection. Yes, Alabama probably has the most talented and well-coached defense in the country. However, it appears the Trojans didn’t establish an identity of being a power team and flirted with being a finesse passing team…again. Of course, Alabama can distort one’s offense to look dysfunctional, we’re still talking about the storied Trojans taking an offensive beating. Obviously Clay Helton said he wasn’t pleased afterward, but his anger is probably nothing compared to the reaction from Trojans fans across the nation.

Defensively speaking: The Trojans played hard defensively early, but Alabama knows it’s identity, and it’s brutally efficient how it goes about its business. They play big boys football, and the Trojans offensive line couldn’t physically stand up to four quarters of intense national championship football. If the Trojans are going to rise again, they’ll have to decide on what kind of team they are going to be in the future.

Warning signs: Perhaps as frightening as anything for Clancy Pendergast’s defense is that his defense was dismantled by a true freshman quarterback in Jalen Hurts, who didn’t even start the game. The Channelview, Texas native proved to the Cardinal and Gold why he was considered by many the nation’s No. 1 dual-threat prep quarterback in the land last season. Yet, once again, the Trojans were burned by a mobile quarterback, so help me upcoming Pac-12 Conference.

The bottom line: The Trojans horrendous loss is not the end of the world, but when you lose like the Cardinal and Gold did, it presents more questions than answers. Obviously the Trojans need to show more heart and improvement against Utah State, but if the Men of Troy learned anything against Alabama, they hopefully learned that if they don’t improve and correct those physical and mental issues, the Stanford game in Palo Alto to open the Pac-12 season in two weeks will be a much-to-early defining seasonal moment. After watching first-hand Alabama inside a loud and energetic AT&T Stadium wear out the Trojans in all phases of the game, Clay Helton will have to make sure his club is ready for another approaching grinder.

The game changer(s): Undisciplined USC special teams play combined with the relentless, disciplined play of Alabama allowed the No. 1 Crimson Tide off the ropes midway through the second quarter and then defending national champs did what they’ve done to most teams, which is to methodically and explosively exploit all areas of an opponent’s weaknesses.

Clay Helton comments: “Yeah, obviously one game does not make a season. We knew coming in, win or lose, that our goal at the end of the year was to be Pac-12 champions. We played a very good team today, and they played up to their potential. And just the cold, hard truth is we did not play up to ours. We had several mistakes, whether it was an interception for a touchdown, a fumbled punt snap that led to another touchdown, a blown coverage, and a lack of a running game that I thought put tremendous pressure on several on our quarterbacks today and put them in some hard situations, a lot of 2 high situations, where it’s a hard day and, basically a four-man rush that was stopping our running game. Credit to Alabama and credit to Coach Saban. They did an excellent job today.”

Alabama head coach Nick Saban comments: “Well, we’re obviously proud of the team for the way they played in the game. And it was a great win for our team and our program. We got off to a little bit of a shaky start in the first quarter, especially on offense. But defense did a nice job of playing really well early on after the first series when they hit a big play and got three points and finally settled down on offense a little bit. And we scored a lot of points, made a lot of big plays, but still our consistency in execution needs to be much improved. And my message to the team afterwards was, if every guy self-assessed and you didn’t look at the scoreboard and just say, “How did I play in the game and how could I do better? That’s what everybody needs to do.”

JuJu Speaks: About the loss to Alabama, Trojans wide receiver JuJu Smith said, “It was two great teams going at it. It wasn’t our night. We couldn’t really get things going, but that’s just the way it is sometimes.”

JuJu Speaks – Part 2: On the difference between the two teams, JuJu said, “Obviously they made the explosive plays and we made the mental mistakes. Our guys ran wrong routes, missed a block, just made mental mistakes. It’s tough, but there’s time to get it right.”

A defensive viewpoint: About the Alabama offense, Trojans defensive end Rasheem Green said “I’m not sure what happened in the second half. I felt like we didn’t play as good as we can. As a team, I felt like we came short on a few plays. I think it’s more execution based.”

The prophet: Prior to the game, Trojans senior tailback Justin Davis said, “The first couple series are very, very important. We’ve been waiting for some seven odd months to play a real team. That first series, we might have to get a couple of jitters out, but it’s up to us as a team to minimize those jitters. I know Alabama is very great coached team, so they’re not going to have jitters like that. We have to make sure that playing the game (in our minds) isn’t bigger than the play on the field and don’t get over emotional.”

The prophet – Part 2: After the loss, Justin Davis said, “I think it’s just a rhythm thing. We would run a play and get a penalty. That slowed us down today. Once you get a penalty, that slows everything down, and they change the play calling. It changes a bunch of things. We have to stay consistent and play disciplined ball because that was a very disciplined team that we played against.”

The prophet – Part 3: Regarding the rest of the season, Davis said, “We have to forget about this game and improve on all the things that we can. There is nothing that can come positive from this game. We can’t keep the same mindset. We have to change the mindset. This game cannot define our season.”

Avalanche: After taking a 3-0 first quarter lead, the Trojans were buried by Alabama 52-3.

Spirit of Troy: The Trojan Marching Band performed a shortened version of its traditional pregame show, which featured “Tribute to Troy,” “Fight On,” “Tusk” and “Conquest.” At halftime the TMB presented a “Sounds of Summer” halftime show, performing “Bang My Head” by David Guetta, “Don’t Let Me Down” by The Chainsmokers and “Can’t Stop the Feeling” by Justin Timberlake.

Comments: After the game, two prominent fans back at the Trojans team hotel probably spoke for many fans. One said, “Holy smokes” and the other added, “If we don’t improve, it’s going to be a long season.”

Living up to the hype: No question about it, overall Jerry Jones AT&T Stadium is probably the best football stadium that I’ve been to. Jones didn’t miss a beat. Although the press box was located near one of the end zones, the view was still great and the food in the press box was first class if you like carved turkey, veggies, rolls, assorted soft drinks, salad, and various types of cupcakes. At halftime out came cooked hot dogs, chicken tenders, ice cream bars, and cookies.

Offensive issues: The Trojans had 194 yards in total offense against Alabama on Saturday. Last season, The Men of Troy averaged 437.9 offensive yards per game.

Defensive issues: Against Alabama on Saturday, the Trojans defense allowed a total of 465 yards. Last season, the Trojans allowed 400.8 yards per game.

The flag is up: The Trojans were penalized 4 times for 46 yards on Saturday night. Last season, the Trojans averaged 68.6 yards in penalties per game.

The last word: The Trojans will open the 2016 home season next Saturday, on Sept. 10 in the Coliseum against Utah State. Kickoff is 11:00 a.m. (PT). The game will be televised on the Pac-12 Networks, and Trojans fans will be hoping that the Alabama game turns out to be a 2016 anomaly.