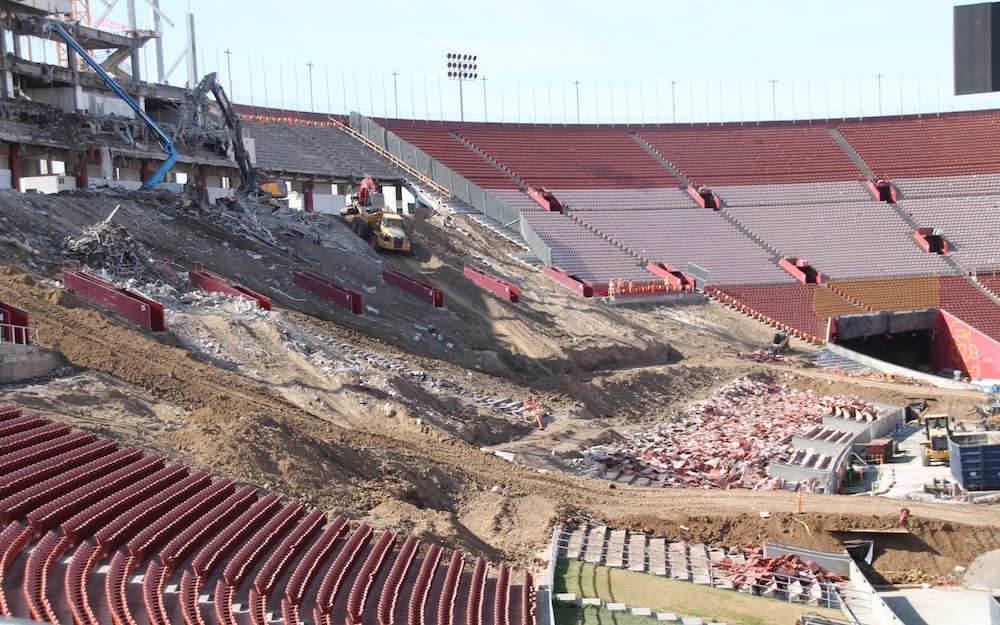 The gift: All 2019 Coliseum season ticket holders will be eligible to receive two free Coliseum removed seats to be distributed early next year. It certainly gets my cardinal and gold collectable juices following. Better tell your better half that you’ll be bringing home two beautiful seat additions for the dining room table.

IMHO:  Giving out two free used Coliseum seats to season ticket holders after the “old” seats are removed is a great gesture by the University to provide some goodwill to what has been – to say the least – a very sensitive renovation seat relocation phase.

The appearance: Formulating a question from a comment made in Friday’s O/NSO, so how long will it be before LeBron James leads the 2018 USC Trojans out of the Coliseum tunnel and against whom?

The appearance – Part 2: The Trojans have six home games (UNLV, WSU, Colorado, ASU, Cal, Notre Dame). If you try and match up the Trojans and Lakers schedules to find LeBron’s availability, don’t waste your time. The NBA has yet to release its 2018-19 schedule. If there’s an opening in his Lakers’ schedule, it wouldn’t be hard to imagine The King showing up for the Irish.

Tunnel leaders: If you think LeBron James, a person without a USC background, leading the Trojans onto the Coliseum turf before kickoff is sacrilege, consider that Dodgers’ outfielder Joc Peterson led the team out last season, although it could be argued that Petersen was at one time committed to play baseball at Troy but elected to go straight into pro ball instead.

Man of Steele: Those cheers you hear are the legion of Trojan fans after the Class of 2019 verbal by highly regarded CB/S Chris Steele, a major defensive cog from national powerhouse Bellflower (Calif.) St. John Bosco. The commitment of Steele could be the precursor of some major talent St. John Bosco talent headed USC’s way, so help me TE Jude Wolfe and QB D.J. Uiagalelei.

Being in uniform: Unless something has changed, it seems to me that those huge numbered cardinal Trojan jersey tops of former USC Heisman Trophy winners not being visible next season in or at the Coliseum peristyle end is a misstep. There has to be somewhere in the Coli that those symbols of Heisman greatness can be displayed. After all, they are on Coliseum display only six times a year.

IMHO:  If there’s no longer the space available to display the symbolic Heisman jerseys on the steps of the peristyle end of the Coliseum, why not place them on the outside of the peristyle end where the team enters at the conclusion of the Trojan Walk? It would not only draw some real attention, but fans could take photos standing underneath their favorite Trojan Heisman Trophy winner.

Banner idea: Speaking of new Coliseum suggestions, how about putting photo banners of former Trojan All-America football players next to the various entrance tunnels. What USC fan wouldn’t get excited seeing a Marcus Allen banner next to their tunnel entrance?

Craning your neck: Those huge cranes behind the outer exterior of the press box side of the Coliseum will be kept in place throughout this football seasons for both the Trojans and Rams games. Work will only stop on game days.

The sod: The new Coliseum playing surface is scheduled to be installed sometime late this month.

The Opening: Ya think that there some intense “inner circle” recruiting by committed Class of 2019 Trojans to currently uncommitted USC recruits at The Opening in Frisco, Texas? Nobody recruits better than committed players.

Taking the heat: If you thought the heat was bad this past week in L.A., the weather at this past week’s The Opening was also in triple digits.

Feeling old: I must be getting older. Can’t believe that one of the 2019 Trojan recruits is athletic Tristan Sinclair (6-2, 210/Danville, Calif./San Ramon Valley HS), the son of former Huntington Beach (Calif.) Edison High Prep All-America offensive lineman Andy Sinclair. I knew Andy when I taught English and Sports Journalism at Edison High back in the day. BTW, Andy’s son, Tristan, was a participant in The Opening this past week.

Feeling old – Part 2: Andy Sinclair was a three-time All-Pac-10 center at Stanford (1985-88) and had a productive career, later drafted by the 49’ers. Andy’s son, Tristan, who is currently an all-league defensive back at SRV also plays strong safety and running back. Despite lacking his father’s size, Tristen still looks a lot like his dad facially. As fate would have it, Tristan’s mother’s alma mater is Cal, so another house divided.

Feeling old – Part 3: Tristan Sinclair, who will visit the Trojans, also has offers from Stanford and Notre Dame. His older brother, Conner, plays football at Claremont (Calif.) McKenna College where he is a junior defensive lineman.

The last word: As mentioned above, last week was an incredibly hot week in Los Angeles, and some Trojan fans probably were getting uptight at the thought that this type of heat that “could” be part of Trojans’ season opener against UNLV on Saturday, Sept. 1. That 1 p.m. kickoff is looking more ominous by the day.