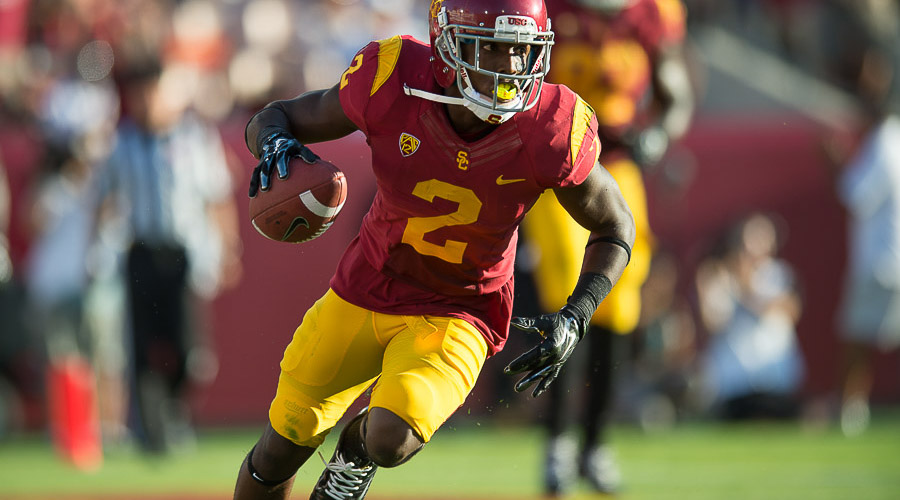 Double dipping: Trojans sophomore Superman Adoree’ Jackson (above photo) stated this past week he intends to be only the second player ever – Michigan’s Charles Woodson the first – to win the Heisman Trophy as college football’s most outstanding player and the Thorpe Award, given to college football’s top defensive back. Honestly, depending how he is used and performs, who’s to say he can’t do it. Not I.

For the record: Michigan’s Rod Woodson won the 1987 Heisman Trophy and Thorpe Award, playing corner and wide receiver for the Wolverines just like Adoree’ Jackson intends to do.

The Thorpe Award: To jog your memory, the Trojans do have a Thorpe winner in Mark Carrier, who won the prestigious award back in 1989. Carrier was a free safety when he won, and if Adoree’ wins it, it will be as a cornerback.

Walking the walk: In Saturday morning’s physical practice in the Coliseum, Adoree’ Jackson once again showed he isn’t afraid to stick his head in front of an oncoming freight train, as A-Jax (185) came up to stop massive running back Soma Vainuku (270).

Let’s get physical: The Trojans actually went “live” at the end of Saturday morning’s practice, and it appeared the few souls able to witness the brief “have at it” saw a Trojans team that was as hungry for contact as a wolf looking for dinner.

Surprises: Saturday’s morning scrum provided a continuing satisfying revelation, as true freshman linebacker Cameron Smith is proving to be even better than advertised. The biggest surprise is his combination physical play inside as well as his pass coverage skills.

Decisions, decisions: There will be no greater future decision to be made than the one involving current starting sophomore left tackle Toa Lobendahn, a freshman All-American at left tackle. When former junior starting left tackle Chad Wheeler returns from rehab, where will Lobendahn go? Stay the starting left tackle? Return to left guard? Backup center? First-year offensive line coach Bob Connelly will have some difficult decisions to make.

Gaining weight: Junior linebacker Quinton Powell said this week that he was weighing 207 and hopes to add 10 more pounds or more. Weight gain has been the issue with Quinton because there is no problem with his speed and quickness.

Hardly Petite: Do you think, given the situation, that Trojans head coach Steve Sarkisian wasn’t salivating over seeing incoming freshman tight end Tyler Petite on the practice sidelines this week wearing a cardinal USC hat? No doubt it must have crossed Sark’s mind that he wished that Petite had entered Troy this spring. Then again, Sarkisian should feel fortunate that Tyler decided to detach from Duke and sign with the Trojans.

Freshman to freshman: During Thursday’s practice, freshman quarterback Ricky Town threw an interception to freshman linebacker Cameron Smith. Ya think that wasn’t brought up by Cameron sometime after practice?

No. 55: Much praise has already been heaped upon senior linebacker Lamar Dawson thus far in spring, but let’s wait until the real-game hitting starts. Wearing No. 55 demands the highest level of performance.

Say what: If you think that replacing departed middle linebacker Hayes Pullard won’t be a problem for the Trojans defense, you might want to rethink that position. Not only was Pullard a good player, he was a great captain and leader on defense.

The Roadrunner: Remember the name Melquise Stovall (Lancaster,Calif./Paraclete), a fireplug, home run hitting tailback (5-9, 180), who was at last Sunday’s Redondo Beach Nike Opening Regional Los Angeles. The Trojans recently offered the class of 2016 prospect, and watching film he reminds me of former Oregon State star running back Jacquizz Rodgers. Although not yet committed, Melquise says that USC has always been his dream school, and he wants to enroll early. And he was wearing some USC stuff at Thursday’s practice, and you can form your own conclusions.

Renovation: I was reminded once again how poor a condition the seats are in the Coliseum during Tuesday and Saturday’s practices in the Grand Old Lady.

The return of Aundrey: Former Trojans offensive lineman Aundrey Walker make his USC Pro Day audition on Wednesday, and it should be interesting to see what the NFL scouts think of the Trojans much discussed offensive lineman.

The surprise: Don’t know what the bigger surprise was at USC’s Pro Day, George Farmer’s 4.3 40-time or Josh Shaw finally talking to the media.

A head scratcher: Former Pro Bowl tight end and Trojans receiver Jordan Cameron has signed a $15 million, two-year contract with the Miami Dolphins. The fact that former Trojans coach Pete Carroll didn’t use Jordan as much as he should while still at Troy is still a mindblower to me, especially when you watched Cameron in daily practices.

The locker room: Former Washington Huskies quarterback Jake Locker, who was coached by Trojans head coach Steve Sarkisian when Sark was the head man at UW, has announced his NFL retirement. Locker will always be remembered by USC fans for his leading the Huskies and Sark to a shocking 16-13 upset over the then No. 3 Trojans in Seattle back in 2009. And, no, we won’t discuss the Trojans use of quarterback Aaron Corp at the time.

The Farm: Former Trojans All-America tailback Reggie Bush has reportedly agreed to sign with the San Francisco 49ers, which brings him near his once choice for his college career. Before the Trojans swooped in, there was talk that Bush was headed for Stanford.

Finally offered: Steve Sarkisian has finally offered class of 2017 wide receiver Keyshawn Johnson Jr. (Calabasas, Calif./Calabasas), and this could be one of the most interesting recruiting pursuits seen in quite some time. You know that Keyshawn, the father, will not only have a major say in this one.

More Keyshawn: What adds some major intrigue into the Trojans recruiting of Keyshawn Johnson Jr. is the fact that Keyshawn Sr. has been critical of times of the Trojans last season and Sark was not his first or second choice during the hiring process.

The final word: In case you missed it, the stairway handles of the Coliseum are painted cardinal and gold. Just thought you might want to know if you haven’t already, so let the renovations continue!