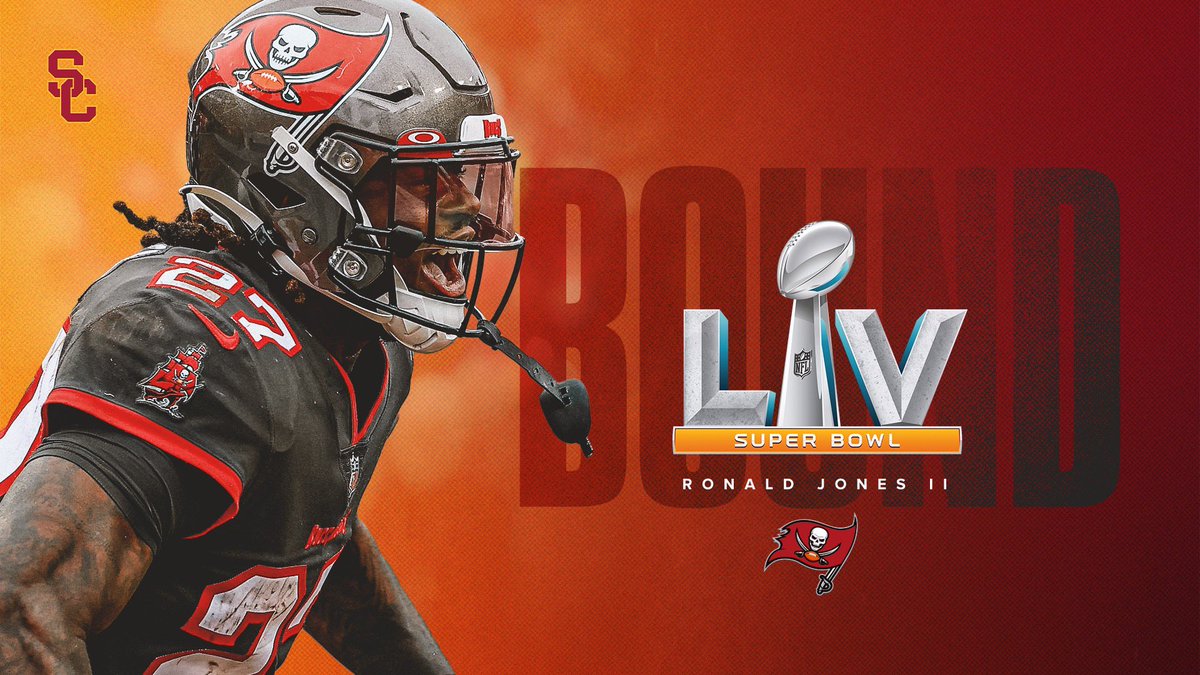 Super Bowl – Part 2: Most of you already are familiar with Ronald Jones, Todd McNair, and Deland McCullough, but wouldn’t it be a sweet moment for Todd McNair, who recently earned a retrial in his endlessly fight aganst the NCAA, to win a Super Bowl ring? And as for Ronald Jones, a touchdown somewhere within any of those four quarters would be a reminder of how good a back RJ was at Troy and how he has improved in the NFL. Of course, having Tom Brady as your quarterback doesn’t hurt.

The Super Bowl – Part 7: A Trojan has appeared in all but seven of the past 54 Super Bowls. Including this season’s Super Bowl, there have been 117 USC representatives overall.

Remembering Super Bowl 1: I was 17-years-old when the first Super Bowl was played between the Green Bay Packers and the Kansas City Chiefs. The game was played at the Coliseum, but since the game wasn’t a sellout, it was blacked out in the Los Angeles area. Popular rock radio station KRLA promoted the idea if you took coat hangers and twisted them in a certain way, put it on the roof, you could get the game. It worked for some, but it didn’t work at our house in Monterey Park.

Remembering Super Bowl 1 – Part 2: So my dad and the rest of my family jumped into the car and drove down to my uncle Bobby’s house in Irvine. Uncle Bobby, a major sports fan like my dad, was able to get the Super Bowl feed from San Diego. The bad news is that we missed most of the first quarter but was able to watch the rest of the game.


Tampa and McKay: John McKay was the first coach of the Tampa Bay expansion team, and there was a documentary made of the team that lost its first 26 games until attaining its first victory. To get some insight into John McKay and the original Buccaneers, enjoy this video: https://www.youtube.com/watch?v=1ZfKe25zLLY&t=1501s

Kansas City and Garrett: Most astute Trojans know that the first Trojan to win the Heisman Trophy was tailback Mike Garrett, who also was an accomplished Super Bowl lV champion with the 1969 Kansas City Chiefs. Here is an NFL films feature on the Kansas City Chiefs highlighted by Mike Garrett along with all-star linebacker Bobby Bell: https://www.youtube.com/watch?v=3CttRGMOcAI


More Garrett: One of the great personal stories about Mike Garrett was when Iron Mike and his KC Chiefs won Super Bowl lV. There was a big Chiefs fan at the time who named his son with Garrett in mind. Here’s a video feature story on the reunion of Garrett and the Chiefs superfan’s family: https://www.youtube.com/watch?v=W_xO3FTMgvk

The telecopier story – Part 2: So, what did I do at Super Bowl XlV? Before there was the Internet with sportswriters sending their stories directly back to their respective publication, those stories had to be sent across the country through a machine called a “Telecopier.” I was working for a communications company called SportsCom, which used our telecopiers to send stories from the stadium back to their hometown newspaper. The process was a writer would “type” his/her story, hand their typed paper(s) to people like me, and I would insert the story in a drum-like machine using a phone receiver, dialed up a telecopier machine at the hometown newspaper, and the paper would then take the story to press.

The telecopier story – Part 3: Working Super Bowl XlV also meant working the NFL press headquarters, which I think was either the downtown Biltmore or the Beverly Hilton. Anyway, working the NFL media center was a wonderful experience because those of us at SportsCom were given access to the massive Las Vegas-style multi-cultural buffets and also given access to another ballroom, which featured every conceivable product that fans could purchase related to the NFL and Super Bowl. I remember getting an empty plastic bag and inserting newly released books on the NFL and players past and present, Super Bowl XlV placemats, pennants of Super Bowl XlV, and on and on. It was like a Toy R Us for the NFL. It was a merchandise buffet.

The telecopier story – Part 4: Unfortunately, the Steelers beat the Rams 31-19, but another great perk of working the Super Bowl was getting a great seat in the press box. Placed at each seat was a Super Bowl XlV logo cushion, a beautiful large Super Bowl beer stein, and a great box lunch. I can’t imagine what it must be like today for the media although I’ve heard the stories.

Planning your calendar: For those that care, I will be honored again to be a guest on the Harvey Hyde Trojans Talk radio show on Thursday night, February 18, at 6 p.m. on station KSHP 1400AM and repeated on Saturday morning.

Caller No. 1: Gregster, is there one player in the Class of 2021 you are excited to see in the spring?

Caller No. 1, there are a lot of interesting freshmen and transfers coming into spring ball, but the most intriguing for me is MaxPrep Player of the Year Jaxson Dart from Utah. I think if Dart had played down in SoCal for a power program, he might have rivaled Korey Foreman as the best in the area. The hope here is that whoever is the Trojans offensive coordinator in the near or distant future will allow Jaxson to run the ball. Folks, this kid can do it all!

Caller No. 2: Greg, were you pleased with the recruiting class of 2021?

Caller No. 2, how could you not be? Well, I guess you could say the lack of a 5-star or 4-star headliner along the offensive line could be a legit talking point. Now really, where is the real weakness in this class? Clay Helton and his group did an outstanding job in 2021, especially considering the disaster of the Class of 2020. You have to give credit where credit is due. Now, will it translate to the field? That’s a conversation for another time.

Caller No. 3: GK, who do you think will replace Alijah Vera-Tucker at left tackle in 2021?

Caller No. 3, I am not so sure the Trojans look to the NCAA Transfer Portal in the long run for a left tackle, but I think new offensive line coach Clay McGuire will be open minded when it comes to the vacant left tackle spot. I wouldn’t discount Texas native Courtland Ford from being a strong pre-spring candidate for the starting offensive left tackle position.

Caller No. 4: Mr. G, any new thoughts regarding who should be the new Pac-12 commish after Larry Scott rides into the sunset in June?

Caller No. 4, my mind has never waivered from my original thoughts on the matter. Make me the ultimate vote and it would be current curator of the Pro Football Hall of Fame Dave Baker, father of former Trojans All-America offensive tackle and retired NFL starter Sam Baker. Dave has everything you’d want in a Pac-12 commissioner including great public relation skills, absolute knowledge of the Pac-12, television rights experience, and just being a great human being. The former UCI basketball star would be terrific.

Caller No. 5: Katzman, I can’t believe I’ve slipped to the bottom of your five callers, but I digress. Yet another food question: Butterfingers or a Hershey bar?

The last word: This past week capped the basic end to the recruiting Class of 2021. One final item of note is not every recruiting story ends in cardinal and gold glory. Early this past week, former Trojans walk-on placekicker Chase McGrath announced he will continue his career at the University of Tennessee. McGrath, who was hindered by a leg injury after a good USC freshman season, was beat out last summer by a true freshman kicker, Parker Lewis. Both kickers should have memorable careers at their respective universities, and so it goes.