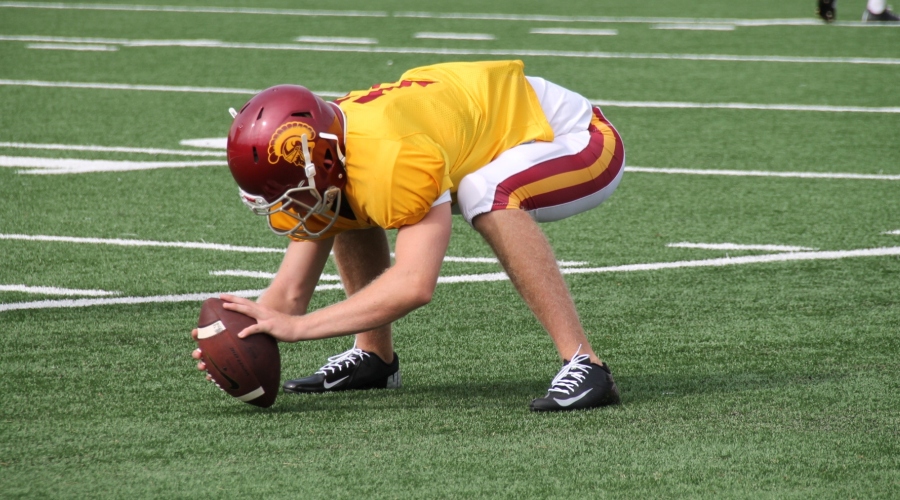 The spring moment: For the most part, the USC Trojans Spring Game was pretty much a scoop of vanilla with some occasional offensive and defensive highlights, but the real showstopper was when blind sophomore snapper Jake Olson (photo above) – making his first appearance in a spring game – executed two clean snaps on field goal attempts late in the afternoon, which sent the 22,000 fans in the Coliseum into an emotional, supercharged standing ovation.

The head cheerleader: As Jake Olson, who lost his eyesight to cancer at the age of 12, was about to attempt his first of two field goal snaps, Trojans head coach Clay Helton, whose voice being piped into the Coliseum public address system, excitedly bellowed, “C’mon, Jake, on the money, bud!” After Jake cleanly connected on both snaps, Helton later said, “To hit two dead on the money? How special a kid is he.”

The Olson factor: If Saturday’s fan response to Jake Olson is any indication, just think of when No. 61 snaps in an actual game! That will be quite a moment, and you’d better have a full box of Kleenex. One can only imagine the thrill and the heart pounding Jake must have been feeling inside as he trotted both on and off the field. What a moment!

Signal calling: While Saturday’s Spring Game was basically “situational” by design, it still allowed fans to see the best of each quarterback. Junior Max Browne continued displaying a great touch for throwing deep, redshirt freshman Sam Darnold was near pinpoint accurate along with a dynamic ability to run, sophomore Jalen Greene continues to be impressive both passing and running, and true freshman Mitch Fink showed promise and poise.There was really nothing not to like regarding the quarterback situation, and there appeared to be little difference between Browne, Darnold, and even Greene on a glorious SoCal Saturday.

No surprise: The performances on Saturday by the Trojans quarterbacks certainly justified Clay Helton’s decision afterward not make a decision on his fall starting quarterback. However, when it’s all said and done, it still figures to be Max Browne taking the first snap against Alabama on Sept. 3 in Dallas.

Offensive review: You had to like the running of senior Justin Davis (7.8 avg.), who continues to play physical but also looks much quicker breaking to the outside. Explosive sophomore Ronald Jones lll (4.6 avg.) showed improved toughness between the tackles, as did fellow sophomore Aca’Cedric Ware (4.7 avg.). Running backs coach Tommie Robinson certainly has had an effect on how the Trojans backs attack the line of scrimmage, squaring their shoulders and making an emphasis to be north-south carriers of pigskin. And BTW, sophomore Dominic Davis (5.6 avg.) didn’t look too shabby either.

Offensive review – Part 2: In terms of the wide receivers, senior Darreus Rogers made some very athletic catches, and junior JuJu Smith-Schuster continued to show why he is an All-America candidate. And, yes, junior Steven Mitchell Jr. had his moments, as well.

Offensive review – Part 3: The big news was the offensive line or should we say left guard position news is that sophomore Chris Brown has apparently pleased offensive line coach Neil Callaway enough to be placed as the starter for now. Brown was physical, efficient, and consistent, and that would probably be the reason why Callaway started Brown over incumbent starter Damien Mama. Competition for the starting left guard spot figures to continue well into training camp in August.

Tightened up: Impressive freshman tight end Daniel Imatorbhebhe caught a 25-yard touchdown pass from Sam Darnold, and that was after Clay Helton had said earlier in the day, “We’ve really progressed in the tight end situation.” Some in the Coliseum press box said that No. 88 reminded them of legendary Trojans tight end Charles “The Tree” Young, who wore No. 89 in cardinal and gold.

Defensive review: Much of the attention to the defensive was focused on the much discussed lack of depth and experience along the defensive line, and to be perfectly honest, the defense Trojans as a unit has a lot of work to do here. It certainly didn’t help on Saturday when starting sophomore tackle Noah Jefferson went down with a hyperextended left elbow injury and was done for the afternoon. However, keep in mind that defensive coordinator Clancy Pendergast didn’t really want too show much with his multitude of blitz packages with Alabama probably taping the Spring Game.

Defensive review – Part 2: The Trojans defense gave up too many yards to the offense, and it certainly is a caution sign heading into off-season workouts. The Trojans did, however, receive some fine individual efforts from defensive end Rasheem Green, linebackers Michael Hutchings, John Houston, Olajuwon Tucker, and safety Marvel Tell lll. Trojans head coach Clay Helton is certainly aware of the situation and even said to the Coliseum fans before the Spring Game that he is thankful that his team will still have 29 practices before opening up against vaunted Alabama.

Defensive 2 – Part 3: Perhaps the defensive play, or should we say “hit” of the day occurred when true freshman C.J. Pollard came up from the secondary and drilled a Trojan ball carrier. It certainly drew a reaction from those in attendance. Pollard is the son of former Trojans corner Marvin Pollard (1988-91).

The final analysis: The Trojans certainly aren’t ready today to face Alabama tomorrow, but that doesn’t mean they won’t be competitive by the time Sept. 3 rolls around. Most in attendance on Saturday would agree with that assessment. The team showed promise on offense but some real questions on defense, which isn’t exactly breaking news. It will help, of course, when Olympic hopeful and All-Pac-12 DB Adoree’ Jackson and Freshman All-America linebacker Cameron Smith return along with some other key secondary members like injured DB John Plattenburg. The good news is it’s a long way to go before facing the Crimson Tide, and there certainly won’t be any problem with off-season motivation with the defending national champs on the regular season horizon.

Tapes rolling: You can be sure that video recordings were running on both the Trojans and Alabama campuses on Saturday afternoon, considering that both clubs held their annual spring games just three hours apart. Alabama’s began at 3 p.m. EDT and the Trojans at 3 p.m. PDT.

The voice: The wife of Trojans first-year offensive coordinator Tee Martin, Toya Martin, sang the national anthem before the game and she was pretty impressive. No word whether Tee can match his wife’s wonderful vocal cords.

Such a deal: One of the better pregame vending booths just outside the Coliseum tunnels was the selling of unused promotional items from this Trojans athletic year, such as various logoed USC T-shirts and other items all of which were sold for just $5 each.

Nathans: Unless told otherwise, one of the more popular new food items being sold inside the Coliseum on Saturday was Nathan’s hot dogs. According to those that digested the New York-based frankfurter, it was a total thumbs up. Each “dog” was kept warm in a Nathan’s advertising wrapper. For the record, the best Nathans I’ve ever had was at Coney Island on a hot and steamy summer’s day in Brooklyn a couple of summers ago.

The ovation: When new USC Athletic Director Lynn Swann’s name was first mentioned over the public address system, the former Trojans All-America receiver and College and NFL Hall of Famer received quite a Coliseum welcome. Deep into the scrimmage, Swann was interviewed on live radio by hosts Jordan Moore and John Jackson and the session was fed through the Coliseum public address system. Although the interview was informative and entertaining, it was somewhat awkward because the spring game was still going on at the same time.

The paint job: Maybe it’s something that has gone unnoticed in the past, but the handrails of the of the Coliseum steps leading up to the upper levels of the iconic venue are painted cardinal and gold.

Postcards: Fans entering the Coliseum on Saturday received a postcard that gave printed instructions and illustrations on the new backpack security rules and regulations. Many fans were caught unaware of the new procedures.

MIAs: Like Lynn Swann’s press conference on Thursday, there were no public sightings at the Spring Game of either current USC Athletic Director Pat Haden or USC Senior Associate Athletic Director J.K. McKay, who is in charge of football. According to a recent report from our Garry P., “Hearing from multiple people within HH that J.K. will not be returning as Sr. Associate AD for Football.”

IMHO: The hiring of Lynn Swann as Trojans athletic director seems to have been received by Trojan fans with “cautious optimism.” Swann and current athletic director Pat Haden have a lot in common. Both obviously played at USC and the NFL. Both are very successful businessmen. Both are national broadcasters of note and both are considered strong family men. The real caution sign for both is that neither had any previous experience running a collegiate athletic department.

IMHO –Part 2: From my recent conversations, many Trojans fans are cautiously optimistic regarding Lynn Swann’s hiring, but some said they felt more confortable at the time with the Pat Haden’s hiring than Swann’s recent appointment. However, those same Haden advocates concede that the former Trojan quarterback’s tenure as athletic director turned out to be a mixed bag of results and scrutiny, which in hindsight was a surprise to many.

IMHO – Part 3: From this vantage point, Pat Haden was always a Trojans “favorite son.” He was, quite frankly, the All-American boy. As for Lynn Swann, he is more USC royalty than favorite son. He is charismatic, charming, and sincere. Although both Haden and Swann are highly competitive individuals, I think that Swann will more intense and commanding in making sure the football program is headed toward national championship caliber.

Swann song: Lynn Swann has mentioned USC winning national championships enough times the last couple of days to make it quite clear those are his unquestioned expectations. He has said for the record that No. 2 is unacceptable. The former Trojans All-America wide receiver is quite serious about that, and it’s certainly understandable, considering his own resume includes a USC national championship and four Super Bowl rings with the Pittsburgh Steelers.

Hmmm – Part 2: It was also interesting that Max Nikias revealed that Pat Haden, who wasn’t involved in the AD search, wasn’t informed of Swann’s hiring until about five minutes before the announcement was released on Wednesday.

Memory Lane: It has become a recent tradition for a famous Trojan football player to lead the team out of the Coliseum tunnel prior to kickoff. For the record, new Trojans athletic director Lynn Swann lead the Trojans out of the Tunnel for the 2014 home game against Colorado.

The last word: After quarterback Max Browne hit All-Pac-12 wide receiver JuJu Smith- Schuster on a 38-yard touchdown strike during the Spring Game, Lynn Swann gushed, “I like to see receivers in the end zone.”