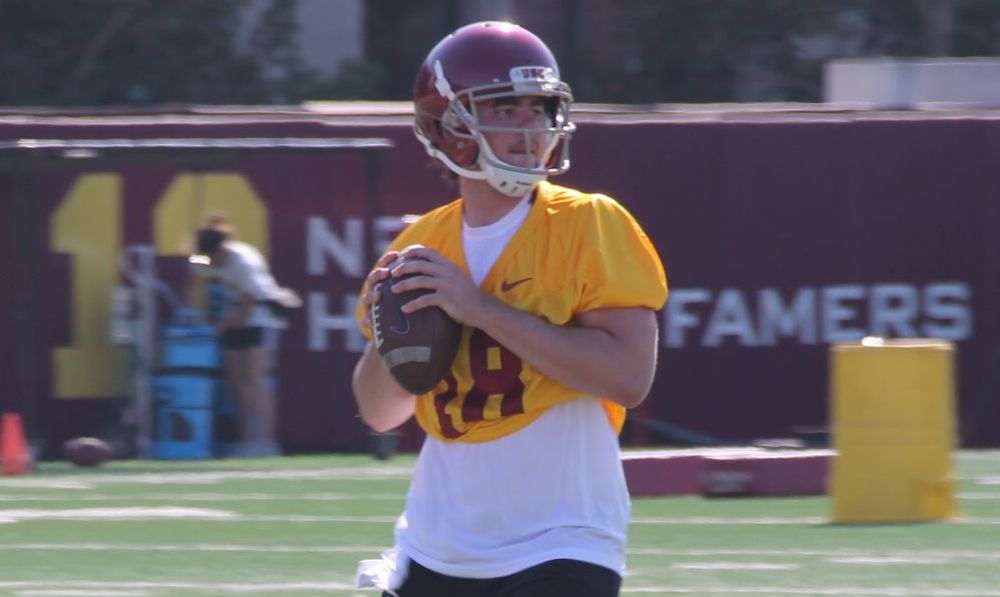 IMHO scrimmage summation: Man, you had to be in the Coliseum to witness what those family supporters and media saw on Saturday afternoon in the Trojans’ first extended scrimmage of training camp. Now, we can respect your perspective that all this JT Daniels (photo above) hysteria is already over the top, but one word best describes Daniels four-touchdown performance in the Grand Old Lady: SPECTACULAR. And it wasn’t that Jack Sears (7of 10 / 2 TDs) or Matt Fink (9 of 14) were mediocre, but Daniels (10 of 12) made some out-of-this-world, deep precision TD tosses, and performed like he was already set to start against UNLV in the season opener.

IMHO scrimmage summation – Part 2: If forced to rank the three quarterbacks on the 65-play afternoon scrimmage, I’d say it’s Daniels, Sears, and Fink in that order. Now, to his credit afterward, head coach Clay Helton did a great “politically correct” assessment (as he should) of the quarterback competition, saying he was pleased with all his quarterbacks and not to get too carried away. Clay said he’d have to look at the film for further evaluation. With all due respect to political correctness, but there’s no question that Daniels made a large separation from the field at least on Saturday; we’ll see if the kid can continue it. Another scrimmage like on Saturday and the QB competition will likely be “game over.” However, no way Sears or Fink raise the white flag or go quietly into the SoCal night. They are intense competitors.

IMHO scrimmage summation – offense: One could argue that the play-calling for each quarterback was different, perhaps based on their strengths, but there’s absolutely no debate regarding production. JT Daniels, who had no interceptions on the day, put a supercharge into the offense and had plenty of help from equally spectacular former Santa Ana Mater Dei teammate Amon-Ra St. Brown, who played wide receiver like a future NFL first-round draft pick. St. Brown is years beyond his freshman status both physically and mentally, and together with Daniels – we repeat once more – they are the best passing combination to arrive at Troy since the early 70s introduction of QB Pat Haden and WR JK McKay from La Puente (Calif.) Bishop Amat. Before we forget, sophomore tight end Josh Falo made some impressive catches, as well.

IMHO scrimmage summation – offense – Part 2: While the offense started slowly before Daniels took over, as the day evolved there were some really bright spots. Tailbacks Aca’Cedric Ware and Vavae Malepeai were excellent and freshman Markese Stepp looked like the second coming of LenDale White. It appeared that the coaching staff limited carries for Stephen Carr in respect to his recovery from back surgery. After a while, the offensive line picked up the pace and did some productive work, although they could definitely use some more work on pass protection. For some good news, there didn’t seem to be many penalties assessed to the offensive line, always a good sign, and the center snaps were executed reasonably well.

Freshmen phenoms: So how good are JT Daniels and Amon-Ra St. Brown? If they continue what they did in Saturday’s scrimmage, they might be the distraction or pivot when fans come to the renovating Coliseum to see the “reconstruction surgery” taking place. The former Mater Dei all-star tandem could be so dominant and so captivating – providing the Trojans win – that USC fans might turn their attention away from their distain and future seating redistributions of the “new Coliseum” structure.

IMHO scrimmage summation – defense: Did the “D” live up to the hype? Well, it started strong early, but had its challenges with JT Daniels, which opened up a running game. Certainly, there were some key moments as it pertains to pressuring the quarterbacks, and nobody was more dominant than redshirt freshman DL Jay Tufele who was a force. Big Jay seemed to collapse any offensive guards that got in his way. When the time comes, the Trojans’ defensive line could be one of the best in the country when Tufele, Brandon Pili, and Marlon Tuipulotu are all in their together.

IMHO scrimmage summation – defense – Part 2: As it was, the defense recorded nine sacks, but had trouble corralling the “less elusive” Daniels. Credit should also go to senior DL Malik Dorton who had a productive day. The Trojans’ secondary had its hands full with talented receivers like Amon-Ra St. Brown and showed signed that there is still work to be done. However, let’s not forget overall that All-Pac-12 senior linebacker Cam Smith and OLB all-star candidate Porter Gustin didn’t play. However, true freshman OLB Kana’i Mauga was a force from the outside. Freshman CB Olaijah Griffin, who has been having a productive training camp, almost came away with an early pick-6 off Jack Sears but couldn’t hold on to the pigskin, so Sears came right back at Griffin and completed a 60-yard scoring strike to sophomore Josh Imatorbhebhe. As for big defensive hits, one was delivered by senior safety Marvell Tell lll, a physical message that will be seen again through the course of the season.

Coliseum impression: Seeing the full renovation of the Coliseum structure for the first time in person, the word that might best describe this monstrosity is “intimidating.” It seems right on top of the playing field. It will probably look even more so when the portable press box trailers are removed after this season.

Coliseum impression – Part 2: I actually thought the newly installed cardinal seats looked really flashy, certainly in comparison to being surrounded by those old, faded, and dilapidated seats. When the new seats totally replace all the old ones, the inside of the Coliseum will unquestionably look rejuvenated. However, IMHO, I would like to see the middle section seating rows done in gold to match the school colors.

ESPN The Magazine: The magazine of the “mothership” came out this week with its national rankings, and the Trojans are picked No. 16. Of the Trojans’ regular season opponents, Notre Dame is No. 11 and Stanford is No. 14. Potential Pac-12 title opponents listed are Washington (No. 5) and Oregon (No. 23).

ESPN The Magazine – Part 2: In its USC preview, the mag says to mark “your calendar” for when the Trojans travel to Texas: “The Pac-12 South figures to be down this season, and the Trojans avoid Oregon and Washington, leaving few opportunities to make an impression nationally. That ups the ante considerably on the Trojans Week 3 trip to Austin.”

Sports Illustrated predicts: SI came out this week with its college football edition and says that the College Football Playoff semi-final matchups will feature No. 1 Clemson vs No. 4 Washington and No. 2 Alabama vs No. 3 Wisconsin.

Sports Illustrated predicts – Part 2:  Other SI Pac-12 nationally ranked teams include Stanford (No. 4), and Arizona (No. 19), which would mean that the Wildcats win the Pac-12 South. That’s right, the Trojans aren’t ranked in SI’s Top 20. FYI, Notre Dame is ranked No. 16. FYI, Arizona quarterback Khalil Tate is the West Coast SI regional cover.

Sneak preview: With Thursday’s Coliseum practice, much of the media got a chance to see the progress of the renovation. However, this upcoming Wednesday at 10:30 a.m. the media has been invited to a grand tour the Coliseum progress. At noon, there’ll be a “Topping Out” beam signing and ceremony, whatever that is.

From the heart: I hope you got to read Bill Plaschke’s LA Times column on Trojans’ radio voice Pete Arbogast, who is a volunteer in the Providence St. John’s No One Dies Alone program, a nationwide service that offers companionship to dying patients. The story describes how Arbo comforts those that have no family or late family arrivals near the end. It takes an extraordinary person to handle the emotions of such a daunting task, and it was heartwarming to read there’s more to life than a national title radio call or a Rose Bowl game broadcast. If you didn’t get a chance to read the story:

Sam show: After helping lead his team to a 17-0 exhibition game victory over the Atlanta Falcons, the New York Post wrote, “The Sam Darnold Hype Train gained plenty of momentum on Friday night. The Jets rookie quarterback impressed in his preseason debut, throwing a touchdown pass in a 17-0 win over the Falcons at MetLife Stadium. You can’t put him in the Hall of Fame just yet, but Darnold showed enough to have Jets fans salivating. He completed 13-of-18 for 96 yards and the one score, but it was more about the qualities he showed than the stats he put up.”

Sam show – Part 2: The NY Post added, “Sam Darnold showed why he was drafted No. 3 overall in April and why people are giddy about his potential to be the franchise quarterback the Jets have been searching for since Joe Namath left town.”

Sam show – Part 3: The Post concluded, “The mobility, arm strength and poise that separated Darnold at USC were on display against the Atlanta backups. There was nothing that indicated the game was too big for Darnold, and he made plays that rookies usually do not. He looked like he belonged.”

More New York: The other major NYC paper, the New York Daily News, also poured on the syrup. Wrote columnist Manish Mehta, “HOLY SMOKES! SAM DARNOLD IS RIDICULOUS. The rookie quarterback flashed his prodigious talent in the Jets’ 17-0 preseason-opening shutout over the Falcons Friday night, leaving perpetually tortured diehards wondering if this was real or just a dream. Darnold was far from perfect, but he exhibited some of the traits that had the Jets privately giddy about the kid’s public unveiling.”