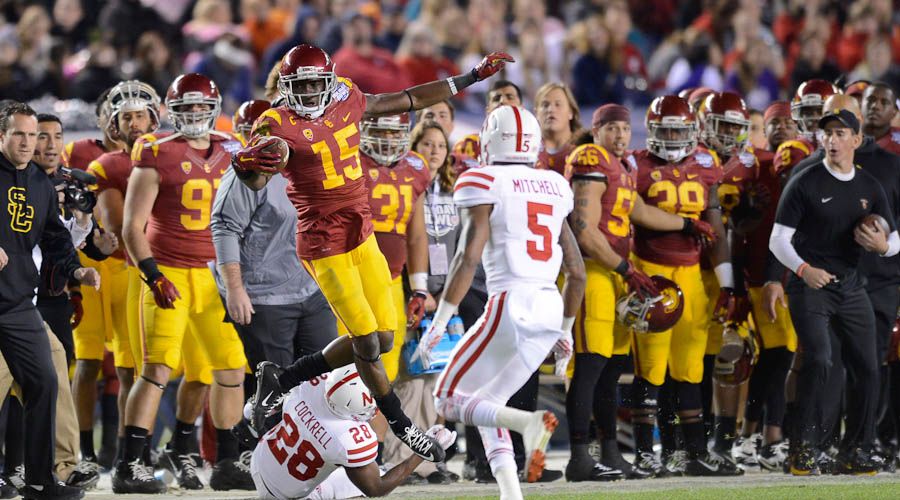 Holiday Bowl thoughts: The whacky 45-42 victory over Nebraska in the whacky 37th National University Holiday Bowl was a great ending to a whacky 9-4 season, but until the Trojans do something about its defensive issues, the undisciplined amount of penalties, and specific elements of special team play, Steve Sarkisian’s lofty goals and expectations will continue to be challenged.

Mr. Hyperbole and Mr. Analyst: Steve Sarkisian once again caught the attention of the media and onlookers after the Holiday Bowl when he said afterward, “Our future, and I’ll say it again, is ridiculously bright.” The first time Sark made a similar comment was after the satisfying 49-14 victory over Notre Dame in the Coliseum on Nov. 29. Hey, the coach was selling his program before the nation, and he was taking full advantage of the opportunity, although he truly believes what he is saying.

Mr. Hyperbole and Mr. Analyst – Part 2: Of course moments later, Sarkisian added that he considered the 2014 season “a total success.” Coach, a “total” success would be 13-0 and a national title if not a Pac-12 championship. Now, Sark, about those four losses to Boston College, ASU, Utah, and UCLA…

Giving credit: Defeating brand names like Notre Dame and Nebraska –despite program’s issues in 2014 – is still something to crow about just like when teams defeat a Trojans program coming off the NCAA nightmare.

I shall return: It wasn’t exactly General Douglas MacArthur’s famed return-to-the- Philippines comment during World War ll, but it was comforting for the Trojans when junior quarterback Cody Kessler announced after the Holiday Bowl that he’d return for his senior season. Although he played well against Nebraska, Cody still needs that senior season to continue to develop and he knew it. Kessler’s decision is a win-win decision for not only him but also for next season’s Trojans.

The will of Williams: Everything tells me that Trojans Holiday Bowl Defensive MVP and All-American Leonard Williams has got to enter the 2015 NFL draft. His performance against Nebraska was breathtaking at times, and there is too much financial security at stake to go pro. However, everything tells me his heart isn’t in it to go to the NFL. I truly believe that his heart is telling him to stay because he loves USC and being a student, but his brain is saying, “Big Cat, it’s a no-brainer decision.”

The will of Williams – Part 2: There is no debate here that he is one of the greatest to put on a USC uniform and how good would he be with a senior season? Kid, you’ve got to go and thanks, No. 94, for the memories.

The will of Williams – Part 3: Whether Leonard Williams goes to the NFL or not, he’ll always be remembered by Trojans football historians as the last great defensive lineman to have been recruited by former Trojans defensive line coach Ed Orgeron.

The Jackson flip: Despite all the usual hype of recruiting, is there anybody on planet earth that would argue that DB/WR Adoree’ Jackson didn’t live up to his high school 5-star recruiting profile? As good as Adoree’ is – and he will get better – that front flip after his first quarter 98-yard kickoff return was a reminder he’s still a freshman, even though Adoree’ said he did it for his father who couldn’t attend the game.

The Jackson flip – Part 2: What gets lost in Adoree’ Jackson’s electrifying kick-off return was his 71-yard catch-and-run touchdown in the third quarter, which he literally was surrounded by five Cornhuskers and then a sixth and escaped. The only question left on the magnificent reception touchdown was whether he was going to repeat the Jackson Flip. Wisely he didn’t, and let’s hope he continues to mature because his future is incredibly unlimited.

House count: The attendance for Saturday night’s National University Holiday Bowl was announced as 55,789. I thought before the game it would be close to a sellout, but it wasn’t. The Holiday Bowl atmosphere – aside from the frigid weather – was great from pregame to post-game, and ESPN had to be thrilled with the type of game that was shown nationally.

House count – Part 2: According to the Holiday Bowl record book, the largest crowd to see a Holiday Bowl game was 65,416, which featured Oklahoma and Oregon. For the record, the largest football crowd at Qualcomm Stadium is 73,302 Super Bowl XXll back in 1988.

The future is now: Now think about it; the Trojans started three true freshmen along the offensive line. Granted they were playing their 13th game and would have to be considered budding sophomores, but their work against Nebraska prompted Trojans tailback Buck Allen to say afterward, “They’re going to be great in the future.”

Misfortune: The Trojans caught a bad break late in the third quarter when the defense had apparently stopped the Cornhuskers on 4th and goal at the Trojans 7-yard line. Unfortunately for the Men of Troy, Nebraska was called for a false start that gave them new life, and Drew Brown kicked a 24-yard field goal.

Agholor apologizes: After the game and deep inside the locker room area, Trojans junior wide receiver Nelson Agholor approached a group of reports and apologized he would not be available for a post-game interview because his high school coach had come to San Diego to watch him play as a Trojan for the first time. Agholor explained that he needed to spend time with his coach but did say he hadn’t decided whether to make himself available for the 2015 NFL draft. It says here it’s a done deal he’s leaving.

The life of Riley: Former Trojans offensive coordinator and new Nebraska head coach Mike Riley was in attendance at the Holiday Bowl. It will be very interesting to see what he does with Nebraska’s outstanding dual-threat sophomore quarterback Tommy Armstrong Jr. When Armstrong is on his passing game like he was against the Trojans, he’s about as dynamic as they come.

Helmet mania: Well the Trojans defeated Notre Dame with their “old” helmets and lost to UCLA wearing their metallic helmets. Sark wisely decided to go with the winning helmet and the Trojans wore their traditional helmets in the victory over the Huskers.

Surprise: I was taken back on Friday night that the famed San Diego Gaslamp District was not overtaken with fans from either team. All the action must have been at the team hotels.

Consensus: More than one person told me that the Fox Grill at the Trojans team hotel, the Hilton Bayfront, was really hopping with fans. Having once stayed there myself, I can tell you it’s a mighty fine facility, especially if you get a room with a view of Coronado and its famous bridge.

The cover: The official program of the Holiday Bowl featured a black and white display of all the teams of the Pac-12 and the Big Ten, which are now part of a Holiday Bowl agreement.

Who knows: Super schoolboy Texas running back Ronald Jones is said to be down to the Trojans and Notre Dame. Jones decommited after an official visit to Notre Dame (hmmm). According to those in the know, both the Trojans and the Irish are right there, and this one could come down to, yes, the weather of both school’s locations. Jones is expected to announce at the Under Armour All-America High School Football Game (ESPN2/1 p.m. PST) next Friday in St. Petersburg, Florida.

A question: Whatever happened to recruiting possession receivers out of high school?

A huge hole: With all due respect to talented returning Trojans running backs Justin Davis and Tre Madden, but if junior Buck Allen goes to the NFL draft – which he should – he’ll be hard to replace. If he returns for his senior season – which is a longshot IMHO, he will be considered as a major Heisman Trophy candidate along with Cody Kessler.

Sigh of relief: That was probably the response from Trojans fans upon learning that Arizona State standout junior wide receiver Jaelen Strong has announced for the 2015 NFL draft.

Tickets anyone: Maybe it’s the fact that it’s just a new college football tradition, but tickets for the 2015 Rose Bowl and College Football Playoff between Oregon and Florida State aren’t hard to find and relatively inexpensive.

Tickets anyone – Part 2: Would Rose Bowl tickets have been harder to secure and for a much higher price if Oregon was playing Ohio State?

Getting bigger: Trojans backup quarterback Max Browne looks noticeably more muscular and overall bigger than he was at the beginning of camp last August. Although Cody Kessler will return in 2015, don’t count out Max’s potential contributions down the road because Kessler is just one big hit away from Browne taking control.

You’re in the Army now: One of the premier post-season high school all-star games is the U.S. Army All-America Game featuring a number of committed and still-in-play Trojans recruits. Just a heads up, WeAreSC’s Johnny Curren will be in San Antonio to file selected reports how what he sees and hears during practice sessions. The game will be played next Saturday, Jan. 3, and shown live nationally on NBC (10 a.m. PST).

The final word: I’ll take Oregon over Florida State in the Rose Bowl, but there is something about destiny’s darlings, the undefeated Seminoles, that smells upset. I’ll also take Alabama in the Sugar Bowl over Ohio State because it says here that the Crimson Tide is the most disciplined and talented team of the four national title contenders.