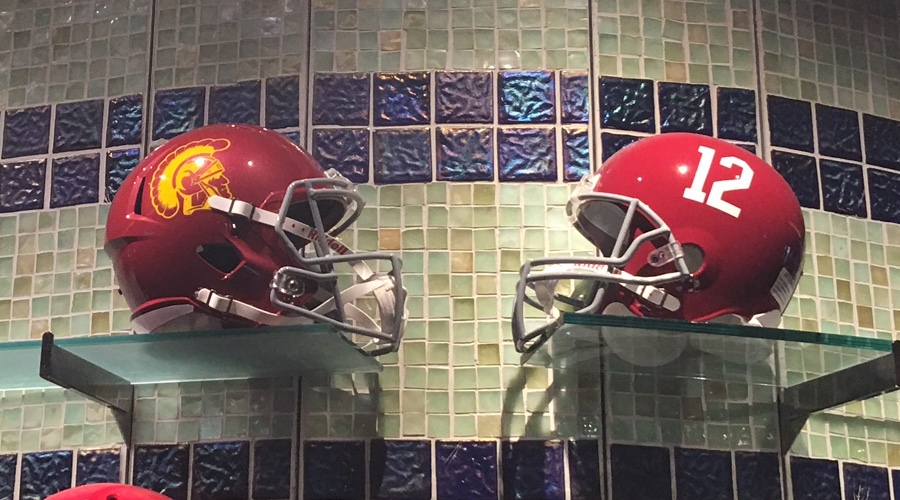 CFP thoughts: If you’re a USC Trojans fan and watched the semi-final games of the College football playoff on Saturday, your thoughts were confirmed that Notre Dame was vastly overrated despite finishing the season undefeated, and Alabama is having a run that may end up being college football’s historical equivalent to the UCLA basketball dynasty under John Wooden. And to think that Trojans will open the 2020 season, helmet to helmet (photo above), against coach Nick Saban’s empire in Jerry Jones magnificent football venue in Arlington, Texas, is a rather sobering thought. Of course, maybe Saban won’t be around by that time, but for the present, the Trojans have a lot of work to do through the 2019 season to simply be competitive for the 2020 opener.

CFP thoughts – Part 2: Was anybody shocked even in the slightest that No. 1 Alabama, which toyed with No. 4 Oklahoma, 45-34, is one of the finalists for the national title? Was anybody shocked even in the slightest that The Tide’s opponent will be No. 2 Clemson, which rolled No. 3 Notre Dame, 30-3, as part of Saturday’s CFP semi-finals doubleheader? As for the early game, Clemson simply had too much of everything for the game Irish while Alabama was Alabama and no need for an explanation. When I see Nick Saban’s program, it really reminds me from a cardinal and gold perspective of the John McKay/John Robinson 1, and Pete Carroll eras -talented, disciplined, extremely well coach, and relentless – and that speaks volumes if you’re old enough to have lived through the Silver Fox’s and Robbie’s majesty and, of course, Pete’s impressive contributions.

CFP thoughts – Part 3: Thanks to Notre Dame getting their shillelaghs handed to them by Clemson, it resurrects the notion that in a four-team playoff model the Irish didn’t belong other than being undefeated at the time of the selection. In an eight-team playoff, sure, ND belonged, but so did some others and that’s why an eight-team playoff is not an “if” but “when.” There is a legitimate groundswell of movement towards that end all.

The counterpoint: The big argument for expanding the CFP numbers is that it would hurt the bowl games – how many times must we listen to that bull cheese? – or it affects the academic calendar – and how many times must we listen to that manure? Just play the quarterfinal games two weeks after the initial field is announced. It will allow fans to make travel arrangements, and why not just seed the teams and in the quarter finals allow the higher seed host the opening quarter final round just to get things started. You can always tweak it in the future.

The Irish model: Both Trojans head coach Clay Helton and athletic director Lynn Swann like to compare the cardinal and gold program’s plan for resurgence to that of arch-rival Notre Dame. However, ND coach Brian Kelly did a complete makeover of his staff three seasons ago and this off-season Clay Helton did not.

IMHO: The TCU 10-7 overtime win over Cal in the Cheez-It Bowl in Phoenix was one of the worst bowl games I’ve watched in quite some time. The final score was indicative of just how boring the game was until the very end and overtime. Of course, if you watched Cal’s 15-14 win over the Trojans in the Coliseum, it wasn’t exactly “must TV” either.

Smelling roses: I’ll take Ohio State in the Rose Bowl and I don’t expect the final score to be all that close. The Buckeyes 38, Washington 24 for the final.

Hmm: Is it me or does it just seem that there seems to be little buzz regarding the Rose Bowl Game? Maybe it will hit on New Year’s Eve, but other than the fact this will be Urban Meyer’s last game as head coach of the Buckeyes, it doesn’t seem like too many SoCal locals care.

The returner: As if next season’s USC season isn’t challenging enough, you might have heard that Oregon quarterback Justin Herbert is returning for his senior season. This should get the attention of Trojans football considering the Ducks are on the regular season and will be in L.A. on Nov. 2 for a clash with the Men of Troy. Some believe that with the return of Hebert, the Ducks should be favored to win the Pac-12 in 2019.

A reminder: The Oregon game in the Coliseum in early November will also be Trojans Family Weekend.

Coming gift: For those of you 2018 USC season ticket holders that accepted the offer, you are reminded that those complimentary pair of historic “as is” Coliseum seats can expect to hear an update early into the new year. The process of seat replacement will begin after the Rams final home game, which could be after a playoff game.

MVP: Congrats to former Trojans wide receiver JuJu Smith-Schuster on being named by the Pittsburgh Steelers as the team’s most valuable player. JuJu had a remarkable season, having become the youngest player in NFL history to have 100-plus catches in a season.

Congrats: To former Trojans wide receiver Steven Mitchell Jr. on being named to the active roster of the Houston Texans. It’s been a long road for Steven after a series of tough injuries during his Trojans’ career, but this Texans’ promotion is certainly a great holiday present for him and his family.

A positive note: When the Trojans open the 2019 season by hosting Fresno State next August, it will be just the 11th time that the Men of Troy will play a game in August (it last occurred in 2014, also against the Bulldogs), and the Trojans have won their last seven August contests.

Just the facts: Fans attending Trojan home games in 2019 will see the fruits of construction labor with the Coliseum’s completed $315-million renovation, which includes new seats with increased legroom, along with aisle handrails, additional aisles and a new stadium-wide Wi-Fi system. There also will be a south-side structure housing suites, loge boxes, club seats, a new concourse and a new press box.

Lost star: Elias Ricks, who some recruiting services rank as the No. 1 cornerback in the nation for the Class of 2020, has committed to LSU and Ed Orgeron. Ricks, who plays at Santa Ana (Calif.) Mater Dei, says one of the main reasons he picked the Tigers was that he felt he would be developed to his fullest potential in order to get ready for the NFL. And you can certainly read between the lines when one of his other options was the Trojans. It should get the attention of new USC secondary coach Greg Burns who will try his mightiest to change that perception under his watch.

Transfer: Trojans 2021 outside linebacker commit Ma’a Gaoteote has transferred from Las Vegas Faith Lutheran to the IMG Academy in Florida. Yes, Ma’a is the younger brother of Trojans’ inside linebacker Palaie Gaoteote.

The last word: Now that Pete Carroll is signed with the Seattle Seahawks through the 2021 season, all you dreamers that Pete will make a second coaching tour of duty at Troy can put that whim away in the attic.