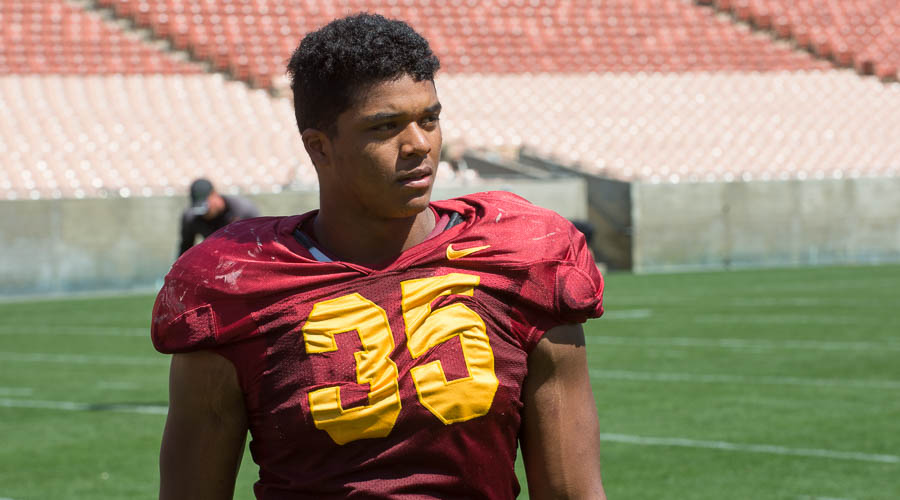 Saturday samplings: By design, the Trojans held a limited scrimmage, which should help the injured and heal the sick. Although there was no 100-play extravaganza, there were some noteworthy assessments. Overall, the offense had their moments, as did the defense. It was like watching a highly edited movie trailer.

Saturday samplings – Part 2: Offensively, the Trojans quarterbacks were pretty good, and Sam Darnold gave no indication – with yet another impressive performance – that he was going to let Max Browne just skate to the starting spot. Darnold is giving Max everything he can to make things interesting. As mentioned by Clay Helton, the Trojans are not only trying to spread the ball around but recent emphasis has been connecting on the deep ball, which is very refreshing for those that have long clamored to see the ball thrown down field. Near the goal line, many were excited to see inside the 5-yard line the Trojans offense return to a traditional I-formation (QB under center, fullback, and tailback alignment) and ram the ball into the end zone.

Saturday samplings – Part 3: Defensively, the Trojans really attacked, attacked, and attacked. Clancy Pendergast’s defense did make things tough on the Trojans quarterbacks by getting them off their mark and forcing them out of the pocket. The communication amongst the defensive players continued to be a positive, as there was no sense of a bunch of mutes out there. The defensive coaching message is clear: Talk, talk, talk, and those exchanges showed positive team defense results. The Trojans defensive line seems to be picking up since the loss of Kenny Bigelow (ACL). However, that loss of Kenny will probably will be eventually felt at some point during the regular season.

The Peters principle: Unlike the original negative definition of the Peter Principle, the Trojans Reuben Peters principle is just of the opposite. One of the nice surprises thus far of spring ball has been the play of sophomore walk-on linebacker-turned- fullback Reuben Peters (photo above), a human battering ram out of Los Angeles Loyola High.

The Peters principle – Part 2: Regarding his switch from linebacker to fullback, Peters said, “I went to them (the coaching staff) and just wanted the best opportunity to play. I played a little fullback on the scout team last year. I did descent, and I thought maybe if I worked a little harder at it I could be good at it. I appreciate the opportunity that Coach Helton and Coach Tee have provided me. I am just trying to take advantage of it.”

The Peters principle – Part 3: Although you could hardly notice it during spring practice, Reuben Peters transition from linebacker to fullback at USC is quite remarkable considering his past football expertise. Peters said, “I played a little bit of fullback in high school for my senior year and that was about it. I mostly played defense.”

The Peters principle – Part 4: As for how he evaluates his fullback game at this point, Peters, who wears No. 35 and is majoring in real estate development, said, “Some of my strengths would be blocking, but there are some small parts of blocking that I need to work on every day. Right now, I am 6-foot, 223 pounds, but I’d like to play at 240.”

The return: Sophomore receiver Ajene Harris, who has recovered from 2015 surgery on his hips, is certainly showing why he could be a very explosive option for the Trojans offense. Maybe it just seems like whenever there is a big catch-and-run, No 18 is advancing the ball.

IMHO: It would be a major earthquake if redshirt freshman quarterback Sam Darnold actually beats out deserving junior Max Browne this spring. However, it says here that if they were both in the same grade and all things being equal, I am not so sure that Darnold wouldn’t end up being the Trojans starting quarterback in 2016.

IMHO – Part 2: In fairness to Max Browne, Mad Max is certainly deserving of getting the starting position because of the time he has put in and the fact that if Max and Darnold were theoretically equal by the end of spring ball, Max should get the nod because of the longevity and loyalty factor.

Wowzers: It has been reported in the media that Trojans wide receiver De’Quan Hampton was frustrated last season because it appeared to him that there was too much emphasis last season being paid to one particular receiver. I certainly didn’t take Hampton’s comments as sour grapes. In fact, I agree with him. Most knowledgeable observers have been saying it for a while that either the play calling or the quarterback has become in the past fixated on one receiver.

Confirmation: Further evidence supporting De’Quan Hampton’s perspective that there was favoritism towards one receiver was validated in a politically adroit answer by Trojans head coach Clay Helton, who told reporters that, yes, previous coaches, Lane Kiffin and Steve Sarkisian, designed game plans for a single talented receiver like Marqise Lee or a Robert Woods. Last season it was obviously JuJu Smith-Schuster. Helton politely said his system is designed to spread the passing wealth, and that it would make things that much more difficult for the opposition to defend.

Confirmation – Part 2: I have felt for a while that the “one receiver” lock should also be attributed to former quarterback Cody Kessler, who would focus on one receiver rather than play the field. In a sense, you can’t blame Cody, who had All-America receivers to move the ball.

The Roy deal: Keep an eye out for redshirt freshman offensive tackle Roy Hemsley, the pride of Los Angeles Windward High, who is showing promise this spring. A former basketball player with great size (6-5, 315), Hemsley’s hoops experience is showing dividends with some good-looking footwork and, at times, domination.

Best kept secrets: It’s hard to argue that the Trojans wide receivers as a group are not as good as any in the country and the best kept are sophomores Deontay Burnett and Ajene Harris. Both are explosive and last season fans got a glimpse of Burnett when he was thrown the pigskin. Harris, of course, missed last season after hips surgery. Ask a number of Pac-12 rivals if they’d like to have Burnett and Harris start for them. It’s a rhetorical question.

A silent surprise: Little has been made that senior Quinton Powell is currently starting at linebacker. Powell, the Florida native who attended Daytona Beach High with Leonard “Big Cat” Williams, is another Trojan who was on the 2013 team under defensive coordinator Clancy Pendergast first USC go-round.

Thanks coach: Many in the media were thankful that the end-of-practice 11-on-11 segments have returned to main field, which is much easier to see and evaluate things for our readers. It was greatly appreciated and again head coach Clay Helton scores big on being accommodating for the media.

The transfer: You don’t realize how big Florida tight end transfer Daniel Imatorbhebhe is until you stand close to him. Imatorbhebhe, who is giving an accounting of his ability in spring ball, is listed at 6-foot-4 and 240 pounds but looks much taller and bigger. It figures that Daniel could end up be a key to the Trojans offense at some point.

Weather prep: Obviously the Trojans will play at Utah (Sept. 23) and Washington (Nov. 12) this season, so maybe this past week’s cold and rain during Tuesday’s practice was useful in simulating the weather conditions. Okay, maybe playing at Utah in late September is a little less of an issue, but it’s still Salt Lake City.

The Big Cat: It has been mentioned before how much former Trojans All-America defensive tackle Leonard “Big Cat” Williams loved his time at USC before departing early for the NFL. Well, we were reminded once again of his love for his alma mater this past week on Howard Jones/Brian Kennedy Fields when the “Big Cat” was working out with the Trojans during spring ball. Wearing a USC football T-shirt and shorts, the star rookie of the New York Jets was not only fully enjoying his time on his former practice field but the social interaction with some of his former Cardinal and Gold teammates, as well.

A disappointing end: By now, you are probably aware that linebacker Scott Felix has lost his appeal to rejoin the team after being found to have, in his words, taken an “over-the-counter supplement from a local nutrition store without consulting our medical staff, believing that there were no red flags in the supplement.” Although this is disappointing news for Felix, he showed class and dignity in his written public apology to his USC teammates, coaches, and the Trojans family. We wish him the best of luck in the future.

So long: Apparently the USC football career of Cyrus Hobbi, who has been deleted from the spring roster, has finally come to an end. Hobbi, who left the program in 2014 and returned last season, has hung up the cleats. We wish him well.

In memory: The passing this week of former USC president Dr. Stephen Sample brought up the following trivia question: Who were the USC head football coaches during Sample’s tenure?

In memory – Part 2: The answer to the trivia question is John Robinson, Paul Hackett, and Pete Carroll.

A reminder: For those that purchased 2016 season tickets and were paying in two installments, the second installment was charged to your credit card late this past week.

The comparison: The Los Angeles Rams announced this past week ticket prices for the 2016 season, and for those Trojans that complained that their “two season tickets (without support club additional cash) cost just under a grand, just one decent Rams ticket was over a grand.

The comparison – Part 2: And just wait until the Rams move into their futuristic stadium and Personal Seat licenses (PSL) are attack to the inevitable increase for the cost of a season ticket. Of course, Trojans fans will also be waiting to see what the cost of a ticket and any potential PSL attachment is attached once the Coliseum is fully renovated. Exciting, isn’t it?

The last word: Former USC tailback Ty Isaac capped his best 15-practice stretch in the Michigan program at Friday night’s Wolverines spring game. Isaac was the game’s leading rusher with 78 yards on 10 carries. Some have wondered how Ty’s career might have been different or saved if running backs coach Tommie Robinson had been in charge throughout Isaac’s USC career and the kid hadn’t transferred.