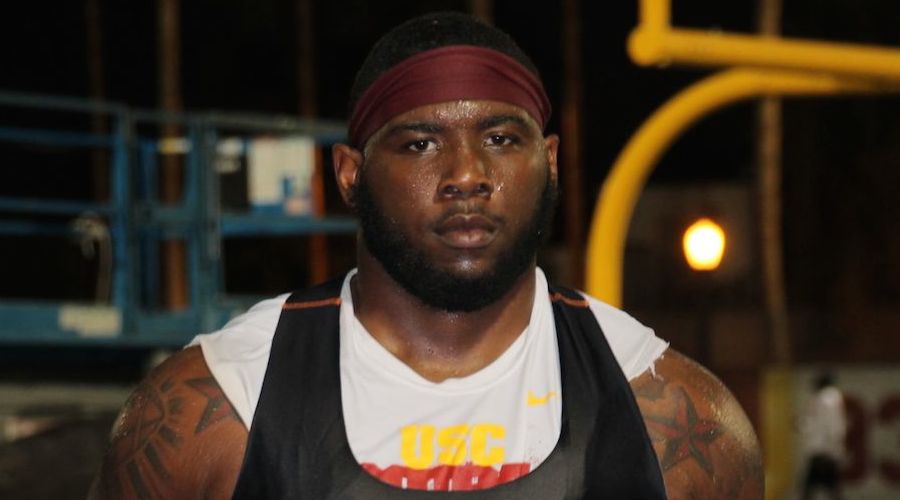 Validation: On just the third day of spring ball – a glorious, sunny Saturday Southern California morning – Clay Helton lived up to his promise that the Trojans would be more physical and, boy, did they have at it in full pads from the beginning to the end of practice. Following through on his campaign promise of being more physical and disciplined from the get-go of spring, Saturday was a bring your popcorn, favorite libation, and lounge chair, as the hitting was snap, crackle, and pop.

Let’s get serious: After the first week of practice, count me in as one that loves the no music at practice and the return to the no frills, hardcore, fundamental football. There are many reasons the Trojans haven’t lived up to some past lofty expectations, and it says here one of those reasons as been the too “cool”/ “I want to be your friend” atmosphere. Helton’s staff is here to coach, and the message has been a positive response by the players, who are showing respect, response, and a little bit of fear for their new instructors.

Counting the ways: New schemes, no music, afternoon fall practices, no metallic helmets, and you get the sense this really is a new beginning in Trojans football, and we’re not talking hyperbole here or just plain spring rah-rah stuff.

FYI: There was some question by Trojans fans as to what position group defensive coordinator Clancy Pendergast would mentor. Pendergast, as confirmed on Saturday by Clay Helton, is using his time to teach and coach the Trojans inside linebackers and secondary while Johnny Nansen has been assigned the “edge” players. And make no mistake about it, Pendergast is conducting the linebacker drills and is extremely active in both their direction and execution.

Mr. Big-elow: There is no question here that the future success of the Trojans rebuilt defensive line will be the production and attitude may depend on junior tackle Kenny Bigelow (above photo). Like it or not, Kenny is a key, and you can bet that first-year defensive line coach Kenechi Udeze will push Bigelow to greatness or to the bench.

A new beginning: Assessing the change in coaching staff, as it pertains to discipline and a new culture, Kenny Bigelow says, “Yes, sir, the culture right now under coach Helton and the new staff is amazing. It honestly feels like the old SC days when Coach O was here and coach Helton and all those guys were here. You can definitely feel the competitive edge coming back. It’s now a team that will accept nothing less than excellence and a coaching staff that will accept nothing less than that.”

A new beginning – Part 2: Now a veteran in the Trojans program, Kenny Bigelow is not surprised by what he has seen in the new changes under Clay Helton. Bigelow says, “I knew my class was a class with great talent, and I know Coach Helton would be the guy to turn this program back around to what it was and bring us back to greatness. You’re seeing a team, a bunch of guys who have been through so much and have been through so many different coaching changes. We expect failure and things to go wrong, but we now know how to rebound to it now, and we’ve been through enough, we’ve been here, and we are old to know when adversity strikes, we know how to face it.”

A new beginning – Part 3: Many say the success of the Trojans defensive line will depend on the type of season that Kenny Bigelow produces. To that, Bigelow says, “This year I expect nothing less than to be a first team All-Pac-12 guy and nothing less than an All-American. I feel as though under KU (Kenechi Udeze)’s tutelage I can be one of the most dominant forces in the Pac-12 this year. I know my guys expect the same a lot out of me, and I hold myself to a higher standard. If I mess up a rep, I’ll go back and do it again. If they see me mess up, get on me. If they mess up, I’ll get on them, too. There is a new feeling in the air right now and you can feel it; it’s thick, and you can see it.”

New beginnings – Part 4: Regarding first-year defensive line coach Kenechi Udeze and his transformation from strength coach to defensive line coach, Kenny Bigelow says, “KU hasn’t changed. When he was the strength coach watching us doing conditioning, he would demand excellence from us. If a guy didn’t touch the line, it didn’t count. If a guy doesn’t make his time, it doesn’t count. If you didn’t do what he wanted, it didn’t count. It has carried over to being our new defensive line coach. KU is the leading sack leader in USC history and he knows what it takes to be great. KU was a first-rounder and KU has won a national championship. He knows what it takes to be great and knows where I want to be. I can’t have anybody better right now.”

The O comparison: Asked if Kenechi Udeze brings back the days of former D-line coach Ed Orgeron, Kenny Bigelow says, “It’s exactly like that. He knows the defense, an attacking defense. KU is going to teach you how to use your hands, teach us how to defeat a block, and how to get off of and get around a block. It’s amazing. This defense is coming easier to me to learn and it allows me to play fast, play with my hands, how get underneath guys, and get around guys.”

FYI: Mike Goff, who was the interim offensive line coach for the Holiday Bowl after Bob Connelly was fired, has been retained and continues as a graduate assistant working with the offensive line.

The Voice: To the shock of nobody, former Trojans defensive line coach and recruiting coordinator Ed Orgeron was recently named the LSU recruiting coordinator, so it should also come as no shock that Coach O has offered Trojans Class of 2017 commits RB Stephen Carr and DB Thomas Graham. They won’t be the last Trojans commits Orgeron goes after, believe me.

Fall guy: Thanks to some investigative information by WeAreSC colleague Steve Bisheff and his recent story on Trojans head coach Clay Helton, Helton told “Bish” that he will return fall practices from those unpopular early morning practices to traditional afternoon practices and like spring practice, they are expected to be open to the public until further notice.

The copycats: I never thought the Lane Kiffin/Steve Sarkisian early morning practices made any sense whatsoever, especially since games are generally played in the late afternoon to early evening. Reading about biorhythms, most experts were agreement that a coach should try to make practice times as close as game times for the body clock. Apparently Clay Helton agreed.

Copycats – Part 2: As for Kiffin and Sarkisian, it certainly appeared that they were trying to emulate what the Oregon Ducks do, which isn’t what a USC should be doing. Since when do the storied Trojans model another football program? Please.

The guide: On the cover of the USC Spring Football Guide are WR JuJu Smith-Schuster, head coach Clay Helton, and CB-WR-RET Adoree’ Jackson. The irony, of course, is that Jackson is not participating in spring ball in order to further enhance his track and field desire to be in the Summer Olympics.

“The Boss”: USC and College Football Hall of Fame offensive tackle Tony Boselli will be inducted into the Cotton Bowl Hall of Fame during enshrinement ceremonies on April 22 at AT&T Stadium in Arlington, Texas.

Feeling the draft: For your calendar, the NFL draft will take place April 28-30, so help me Su’a Cravens.

On your Mark: You’ve got to admit that former Trojans quarterback Mark Sanchez, who was traded on Friday to the Super Bowl champion Denver Broncos, isn’t afraid to step into the rather large shoes left by the recently retired Peyton Manning. All Mark has to do is rely on that awesome Broncos defense and be the second coming of Mr. Manning.

In memory: It was sad day on Thursday upon learning of the passing of former Trojans All-America defensive tackle Gary Jeter, who broke legendary Ohio State coach Woody Hayes’s scarlet and gray heart when the former Ohio Player of the Year out of Cleveland Cathedral Latin High signed with John McKay and the Trojans.

In memory – Part 2: I vividly remember meeting Gary Jeter on his first day in uniform at USC, and he may be the most imposing physical specimen for a freshman that I have ever seen wearing the cardinal and gold. The 18-year-old’s handshake nearly broke my hand. He was a man-child.

The revelation: Reggie Bush recently appeared on the Rich Eisen Show, and the former No. 5 commented about ”things being in motion” regarding a potential ”return” to the Trojan family. Okay, but what should also “be in motion” is an apology to the USC family before he is granted full immunity to return to the institution that provided him his opportunity for greatness and glory.

West Coast Time: For those West Coasters that are challenged regarding time calculations for the CFP semifinals, kickoff will be at noon and 4 p.m., respectively. That should give plenty of time here in the West to participate in the New Year’s Eve revelry.

Pasadena bypass: Because Jan.1 lands on a Sunday, the Rose Bowl and Parade will take place on Monday, Jan 2. With all due respect, it just doesn’t seem like New Year’s Day without the bowl games and parade.

Mocking the draft: The Times NFL columnist Sam Farmer recently did his mock NFL draft of the first round, and there were no Trojans selected.

The last word: Speaking of The Los Angeles Times, for the last decade and beyond, Gary Klein has been the Trojans beat writer for The Times. Klein announced this week through his Twitter account that he has been reassigned as the new beat writer covering the Los Angeles Rams. We wish the likeable journalist the best in his new endeavor, and he will be missed.