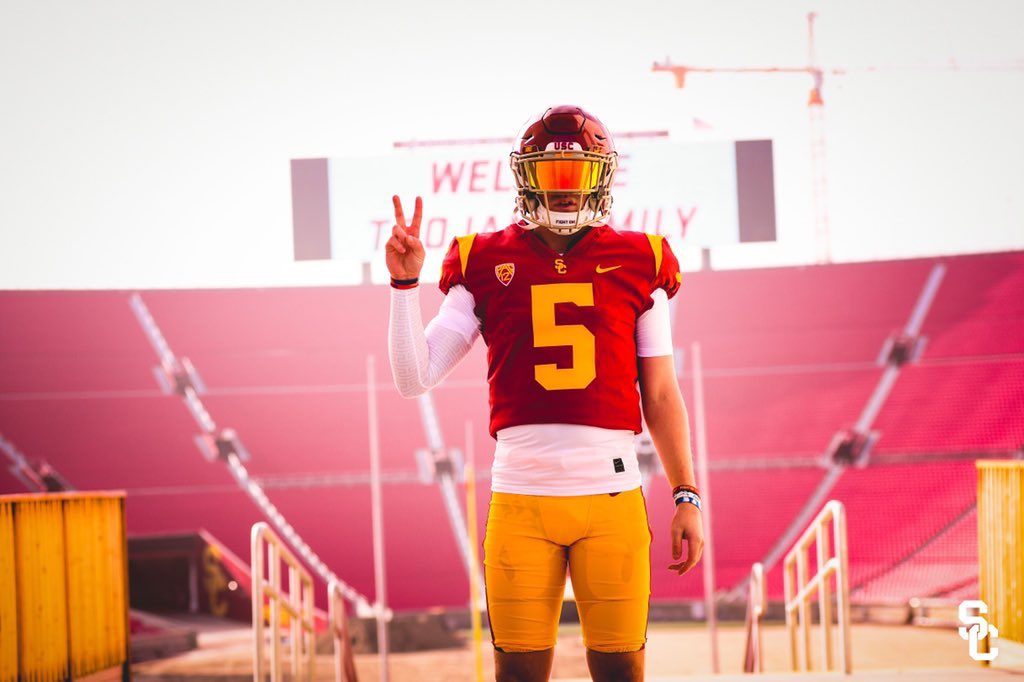 The Wednesday deadline: This Wednesday’s “second” signing day is almost upon us, and there has been little fanfare regarding whom the Trojans will sign. The dye is pretty much cast. However, those in the know say the Trojans hope to sign around three players. One to keep an eye on is tight end Jack Yary, son of legendary Trojans offensive tackle Ron Yary. According to sources, Jack, who was an original commit and then decommitted to the Trojans, was blown away last weekend during his USC recruiting visit by the presentation regarding academics and Troy’s vast networking as it pertains to life after football. At this point, it would be a monumental upset if Jack doesn’t sign with his dad’s alma mater.

The Wednesday deadline – Part 2: Another name to watch for on Wednesday’s signing day is Louisiana (Evangelical Christian) dual-threat quarterback Blake Shapen (cover photo above), who was also a visitor to the Trojans’ campus last weekend. The Trojans have competition from Baylor and their new head coach David Aranda, formerly the defensive coordinator for national champion LSU. Do the Trojans need another scholarship quarterback? Absolutely, given the hazardous nature of playing the position in the Air Raid offense. UPDATE: Shapen committed to Baylor on Sunday night.

The Wednesday deadline – Part 3: The Trojans are hoping to get a signature on Wednesday from Ohio tailback Michael Drennen ll (Dublin, Ohio/Coffman), who is said to be down to the Trojans and Kentucky. Again, do the Trojans need another running back with four returning from last season’s team? Again, absolutely. Vavae Malepeai and Stephen Carr will finish their Trojans’ careers after next season, and we all saw what injuries did to the running back unit last season.

Clemson is back: Well, Clemson took another huge bite out of Los Angeles when Class of 2021 DL Kory Foreman (Corona, Calif./Centennial), the No. 1 ranked player in California and most say the best in the country regardless of position, announced he is an early commit to Clemson after taking a recent visit back to South Carolina. The Tigers already have enrolled Bellflower (Calif.) St John Bosco High superstar QB DJ Uiagalelei. Clemson has also received a verbal from Uigalelei’s junior wide receiver teammate Beaux Collins, another national blue chipper. What does it mean for the Trojans? There’s plenty of work to be done if they want to stay within sniffing distance of Foreman and Collins.

Perception: The school of thought was that since Trojans’ defensive lineman freshman Drake Jackson had such a great season wearing the cardinal and gold, Kory Foreman would want to be reunited with his Centennial High teammate. At the moment, it appears that is not the case. If there is good news, it’s still very early in the 2021 recruiting class game, but the Trojans better get in the game before it gets into another uncomfortable exodus for the Class of 2021.

The next cycle: The Trojans held their Junior Day, Class of 2021, on Saturday, and it figures the “new” coaching staff will be introducing themselves with some gusto. One of the obscure sidebars to the coaching staff situation is that Chris Claiborne, the Trojans’ legendary linebacker, was in attendance during last weekend’s official recruiting visits, according to sources with knowledge of the weekend. This is a big deal for those that want to see Chris become part of the coaching staffing. If Claiborne is also at this weekend’s Junior Day, one would hope that Clay Helton must seriously be thinking of bringing on No. 55 as perhaps a grad assistant, which would be a great move on a lot of fronts.

The big questions: Based on the current status of the Trojans returning players on the roster and the results of recent recruiting efforts, just how many players will the Trojans take out of the NCAA Transfer Portal for immediate help? With the departure of 2019 starting offensive tackles Austin Jackson and Drew Richmond, will that mandate a deep trip into the portal?

Nostalgia: I miss when there was just one signing period (February) and not just because there is little suspense in February signings as opposed to mid-December. I do think that the “early” signing period has created a whole lot of negative dominoes effects that have hurt the game and have placed undue pressure on both the universities and recruits. What started out in the early signing period as an opportunity to make it easier for recruits and for the schools has turned out to have more issues than what it’s worth.

Not so super: In this Sunday’s Super Bowl, there will be no Trojans on the rosters of either the Kansas City Chiefs or the San Francisco 49’ers. That says something considering a Trojan has appeared in all but six of the 53 Super Bowls.

By the super numbers: There have been 114 USC representatives in Super Bowl history.

Super Trivia – Part 1: How many Trojans have been named the MVP of the Super Bowl? ­

Remembering Super 1: The Trojans were well represented in the first Super Bowl in 1966, a contest that featured the Green Bay Packers and the Kansas City Chiefs. On the Green Bay roster was former Trojan DB Willie Wood, while the Chiefs roster included former Trojan QB Pete Beathard and RB Mike Garrett.

Super Bowl Trivia – Part 2: Who were the last Trojans to have played in a Super Bowl?

Good luck, kid: Sorry to see Trojans junior safety CJ Pollard will leave the USC for a grad season somewhere else. CJ is the son of former USC secondary star Marvin Pollard. The kid apparently would have saw spot duty in 2020 if he had stayed and would have played behind some talented underclassmen. The NCAA Transfer Portal is alive and well.

Make it a weekend: The annual Trojans Family weekend will take place on Oct. 10 when the Trojans play host to the Cal Bears.

Rumor 1: Is it true that there will be no official USC recruiting dinner following this Wednesday’s national letter of intent for football?

Rumor 2: Is it true there is not going to be a coach’s tour this spring? If so – which I find hard to believe at some level – it would follow in the footsteps of no Salute to Troy, as well.

Invitations: For those with interest, USC President Dr. Carol Folt is doing a national tour of USC alumni and invitations have gone out. It will be interesting to see if Dr. Folt has a question and answer session following her opening remarks because you can bet that she will be asked about her justification of support for Clay Helton. A follow-up question should question her vision for USC football as a national championship sport.

In memory: Sadness again hit home here at WeAreSC with the announcement that former writer and contributor Drake Strand (AKA Tirebiter) has passed way too young at the age of 51 due to diabetes. Another hand-picked journalist selected by Garry Paskwietz, Drake was a tremendous guy, a USC football loyalist to a fault, and devoted to the cardinal and gold as much as anybody I know. A friendly smile and just a good guy, Drake will be greatly missed.

Caller No. 1: Mr. Katz, what was your initial reaction to learning that Class of 2021 DE Kory Foreman had committed to Clemson, spurning the Trojans? It was somewhat surprising considering Kory’s relationship with Trojans DE Drake Jackson as a former high school teammate. On the other hand, Foreman’s announcement again – and painfully – reminds us what the state of USC football is with the decision to retain Clay Helton as the Trojans’ head coach. It is what it is, and there is little debating that. I am not so sure that Foreman’s verbal to Clemson won’t stand the test of time.

Caller No. 2: Greg, when did you really start following recruiting and where did you get your information from? Well, when I was a young pup around 19, I would drive from my home in Monterey Park to Downey once a week to buy the Long Beach Press-Telegram because legendary sportswriter Loel Schrader had a column, “Cuff Stuff”, devoted to USC football recruiting. Loel was getting his inside from deep within the football program (John McKay). In the early days of recruiting, I was also a subscriber to a national recruiting report published by a gentleman named Joe Terranova, who had the original star system. It was one of the first roadmaps to recruiting rankings. Then there was Blue Chip Magazine, which presented a national overlay of recruiting by sections of the country.

Caller No. 3: Sir, what are you looking forward to seeing for spring practice? One of the areas I have always been intrigued is seeing what players will be moved to new positions and how it affects them both individually and from a team standpoint. In some cases, players are moved back to a position they played in high school. I remember when Marcus Allen came to USC, he was a quarterback and a safety. The Trojans started him at safety, then moved him to fullback, and eventually tailback where he won the Heisman Trophy. John McKay always said his first job was to evaluate the best position for a player he and his staff recruited.

Caller No. 4: Coach, if you could make some more Coliseum renovations, what would you do? I would enclose the Coliseum by getting rid of the peristyle sun deck and turn it into an intimate enclosed bowl. However, that addition would be stipulated that the highest seat would not block the view of the historical peristyle arches. One other note, I would move the Trojans’ Marching Band to seating behind the Trojans’ bench like the old days. I was never comfortable with the idea of the band being stuck behind an end zone for the sake of opening up additional ticket revenue.

The Final Word: I am just dying to find out who is going to be the Trojans’ special teams coach for 2020 and how much time Clay Helton is going to devote to special teams in practice now that ST guru John Baxter has left the building.