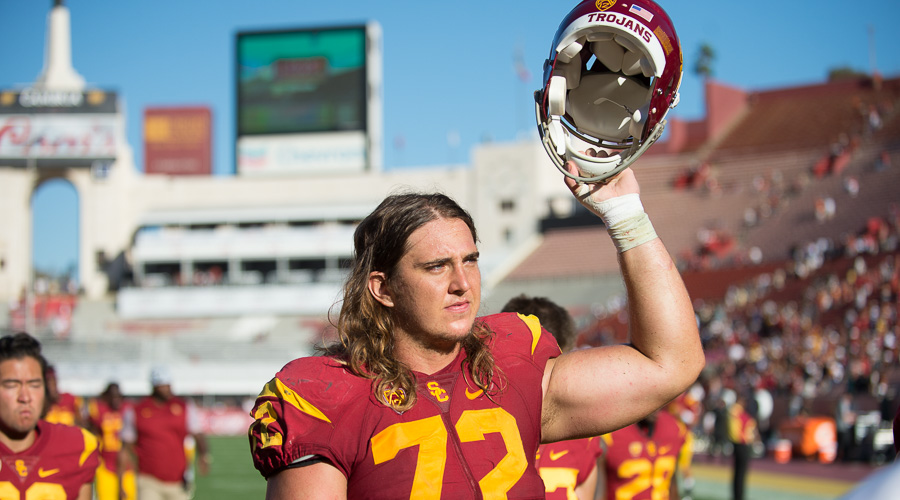 Trees and menorahs: First off, wishing all of you a very Merry Christmas, a very Happy Hanukkah, and for all Trojans fans a win over Penn State in the upcoming Rose Bowl, the perfect present. And was there a better pregame holiday gift than being a Trojans season ticket holder and winning the Rose Bowl ticket lottery?

Reservations please: Clay Helton and his Trojans will reassemble on Monday and move into their team hotel, the Omni Los Angeles Hotel. On Tuesday, the Men of Troy will travel to Disney’s California Adventure and Cars Land for their Rose Bowl Welcome Press Conference (2 p.m.) where they will be joined by the Penn State Nittany Lions.

Cars Land – Part 3: Disneyland/California Adventure Cast Members are being offered a chance to win an autographed football from the Rose Bowl winning team. Ten lucky Cast Members will be selected through a raffle on Jan. 4.

Looking prime: Penn State will partake of Lawry’s Prime Rib in Beverly Hills on Wednesday, Dec. 28, at 4:30 p.m. while the Trojans will chow down at Lawry’s on Thursday, Dec. 20, at 4:30 p.m. The indoor event is not open to the public or the media, but you can watch the teams get off their respective busses if that satisfies your curiosity and taste buds.

Meet and Greet: This upcoming Friday, Dec. 30, Penn State and the Trojans will be made available for a Media Day at the L.A. Hotel Downtown. The Nittany Lions will appear at 8 a.m. while the Trojans will make their presence felt 9:30 a.m. The event is not open to the public but to media members only.

Over preparation anxiety: With three weeks of preparing and scheming for Penn State, I asked Clay Helton last week if there was a concern that the staff could over game plan and analyze. Helton replied, “What I challenged them (the coaching staff) to do was just not take that first week game plan and hold it there, reevaluate yourself. Break it down again and see if there was another subtle way you’d like to do something, something that we are missing. Just don’t go through the motions.”

Early J-2 forecast: The early weather report for Pasadena on Jan. 2 calls for partly cloudy with a high of 58, a low of 43, precipitation at 10 percent, and humidity at 71 percent.

California dreaming: Penn State’s initial 20,000-seat Rose Bowl allotment sold out the first day, as members of the Nittany Lion Club were given first choice and bought them all. As for Penn State students, they bought up their allotment in just over a day. BTW, Sunday’s temperature in University Park, home of PSU, was cloudy with a high of 39 degrees and low of 31 degrees.

The re-match: The Trojans and Penn State could meet again in the 2018 Rose Bowl, since the Granddaddy of Them All will be hosting one of the College Football Playoff semi-final games Jan. 1, 2018.

The Wheeler wall: Congrats to Trojans offensive left tackle Chad Wheeler (photo above) who was recently named a first team All-American by Campus Insiders, thus ensuring that he, too, will have a plaque on the Trojans All-American Walk wall, which leads from the John McKay Center and the Trojans locker room area to the practice field.

More Wheeler – Part 2: Asked what the turning point was for him to transition into an All-American, Wheeler said, “I have to give props to Coach Callaway and Coach Helton, they prepared the (heck) out of us. Got to give them props and my O-line, keeping my head up during the tough times and games, and keep moving forward and credit to the team for making me better. This is the most fun I have had at the collegiate level. Of course, we’ve got more wins than we’ve had in a season, we’re playing in the Rose Bowl, so it’s an honor and a privilege.”

The assessment: Asked about the vaunted Penn State line, Chad Wheeler said, “They are really good, so we have to be ready. We’ve been preparing last week and this (past) week like we going to have a game on Saturday, so we’ll have three weeks of preparation for the game plan. We’ll come out firing on January 2nd. They are a physical bunch schematics wise; they know what they’re doing and they rarely miss gaps.”

Please stand: Since Penn State is the higher ranked team in the CFP rankings, not only will the Nittany Lions be wearing their blue home uniforms, but the PSU Band will perform the National Anthem.

Planning ahead: The Rose Bowl will do its annual Hall of Fame induction next Sunday morning (11 a.m. PT), Jan. 1, and former Trojans tailback Ricky Ervins will be inducted.

And the band plays on: The Rose Bowl week for the Trojans Marching Band will include this Thursday, Dec. 29, a USC Pep Rally (7:00 p.m.) at The Americana at Brand 889 Americana Way, Glendale (free and open to the public); Friday, Dec. 30, a Disneyland Parade and Rally (2:30 p.m.) at Disneyland Park 1313 Disneyland Dr., Anaheim (requires admission to park); Saturday, Dec. 31, the Tournament of Roses Bandfest (4:00 p.m.) at Robinson Stadium, Pasadena City College 1570 E. Colorado Blvd, Pasadena (tickets available at: tournamentofroses.com/events/bandfest; and next Sunday, Jan. 1, the Jock Rally (4:15 p.m.) at Heritage Hall on the USC campus (open to the public).

MVP: Bellflower (Calif.) St. John Bosco offensive guard Wyatt Davis (6-5, 315) has been named The Los Angeles Times Southern California High School Player of the Year. Davis, who is committed to Ohio State but is still being heavily recruited by the Trojans, is that rare type of high school offensive lineman that could crack the starting lineup during his freshman year in college. And don’t think that Clay Helton and his staff don’t know it.

More Banner: Asked about being recruited to USC, Zach Banner, who hails from Tacoma, Washington, said that with three weeks to go in the recruiting season during his senior year in high school he thought he was going to Oklahoma. However, when he sat down and analyzed the pros and cons of USC and Oklahoma, it was what the Trojans offered in the classroom and his future in broadcasting that made the final choice clear. Banner, who has interned that past three years at FOX, said, “In the end, I wanted to be a Trojan.”

HOF results: The NFF will announce the 2017 College Football Hall of Fame Class on Jan. 9 in conjunction with the College Football Playoff National Championship in Tampa, Fla. Former Trojans on the ballot include quarterback Matt Leinart and safeties Mark Carrier and Troy Polamalu. Honestly, how can all three not be admitted on the first ballot? If I were to guess, I would say that Leinart and Polamalu should be locks.

Timing is everything: For those of you that are punctual and on time for every appointment, it should be noted that the official kickoff time for the Rose Bowl is 2:10 p.m. PT/5:10 p.m. ET.

The last word: Trojans legendary quarterback Jim Hardy, 93, was the subject of a wonderful Sunday morning Los Angeles Times story regarding his unofficial attendance record of 84 Rose Bowls in a row. Hardy, who is in the Rose Bowl Hall of Fame (1994) and was once a quarterback for the Los Angeles Rams, has a special dislike for Notre Dame. During this season’s Trojan 45-27 waxing of the Irish, you may recall rain accompanied the Coliseum game. Hardy, who attended the game in the downpour with his wife, “Hank,” said, “Well, I wasn’t about to leave that game. If there’s anybody’s ass I like to see get kicked, it’s Notre Dame’s, you know? Especially if the Trojans are doing the kicking.”