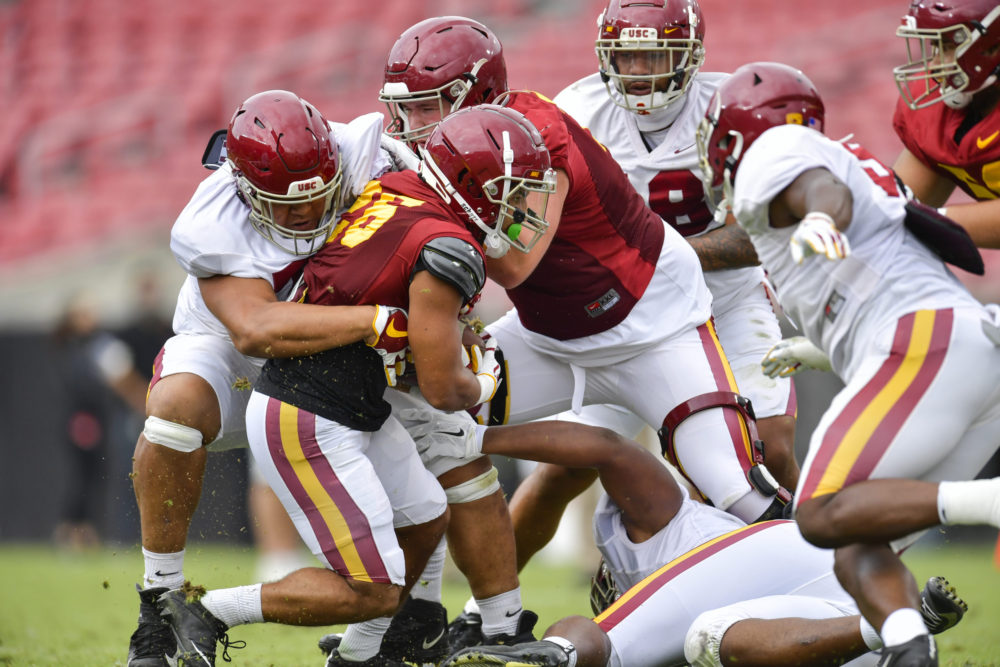 Scrimmage crumbs: Although the media was not in attendance at Saturday early morning Coliseum scrimmage, there were a couple of noteworthy nuggets seen in some released evening video. On one play, Trojans’ sophomore quarterback Kedon Slovis threw a 35-yard pick-six touchdown return to junior nickel back Greg Johnson, and later senior quarterback Matt Fink connected with redshirt freshman tight end Jude Wolfe for a red zone touchdown in the back of the end zone.

The evaluation: With less than two weeks before the opener against Arizona State, Clay Helton has listed three areas that have stood out to him regarding training camp and his team. Those three areas are (1) Mental toughness, (2) Discipline, (3) Team togetherness. I didn’t expect that Gentleman Clay would publicly add two more areas that stood out: (4) Vastly better coaching on the defensive side of the ball, and (5) Superior talent at most positions than the rest of the Pac-12 South Division.

Keep it simple: Clay Helton believes one of the most impressive aspects of his new defensive coordinator Todd Orlando is his ability to make his aggressive schemes simple for his defenders to learn. Helton believes Orlando’s schemes fit the Trojans’ personnel perfectly. As much as the new schemes will present an aggressive approach, it’s the attitude adjustment of the players that will also be a transparent. Defensive players have spoken on and off the record that the priority of for physicality and violence have provided a new excitement and determination to this unit.

Wow: As you’re aware, the Trojans cleaned house with its 2019 defensive staff, which was headed by former defensive coordinator Clancy Pendergast. If there was any doubt that a change was needed, just remember the Trojan defense last season gave up a school record in total yards. As if you hardly noticed.

The difference-maker: Asked on the record about the difference between last season’s defense and this season’s training camp, sophomore corner Chris Steele said, “The difference is the physicality and the energy.”

The return: Back with the Trojans is sophomore inside linebacker Tayler Katoa (Layton, Utah/Layton High) after doing service on a Mormon mission. With the season-ending injury to senior inside linebacker Jordan Iosefa and touchy hamstring of junior Kana’i Mauga, Katoa (6-2, 235) may be part of the linebacker mix quicker than anticipated. Special teams may also be an immediate option for Tayler.

The improvement: According to Clay Helton, first-year special teams coach Sean Snyder is having quite a positive effect with returning sophomore punter Ben Griffiths. Ben apparently has improved his technique and fundamentals under Coach Snyder, and do we need to make a comment? It should be noted that Coach Snyder was once a consensus All-American and All-Big Eight first team punter as a Kansas State senior in 1992, averaging 44.7 yards per punt. He was inducted into Kansas State’s inaugural Ring of Honor Class in 2002 and into its Athletics Hall of Fame in 2016.

The analysis: According to Trojans’ corner Chris Steele, quarterback teammate Kedon Slovis is “an NFL quarterback playing in college.”

Virtual Salute to Troy: Salute to Troy, USC football’s annual kickoff event for fans, will be held virtually this Friday, Oct. 30, at 5 p.m. PT. Fans are welcome to view Salute to Troy free online by registering.

Virtual Salute to Troy Part 2: USC head coach Clay Helton and his staff will introduce the 2020 Trojan players. The event also will feature appearances by the Spirit of Troy, Song Girls, Spirit Leaders and Traveler, as well as a celebration of the 50th anniversary of the 1970 USC team and 25th anniversary of the 1995 Trojans.

ASU early bird: Asked this week in a Pac-12 media conference of Pac-12 South Division players, Arizona State’s star sophomore quarterback Jayden Daniels commented on the 9 a.m. opener with the Trojans by saying, “We practice at 9 or 10 a.m., so we shouldn’t be out of routine.” The Trojans have been practicing during the week in the mid-afternoon due to fall academic scheduling.

Sign of the media times: Obviously, COVID-19 will have a direct effect on media covering USC home football games. As a public service to our readership, the following was a media credential advisory:

“Please be aware that media access to the Coliseum press box and field will be limited in 2020 due to social distancing, based on guidelines from state, county, campus and Pac-12 officials. Submitting this application does not guarantee a credential. Multiple credentials for a media outlet are unlikely. Credentials will be decided on a game-by-game basis. Credentialed media must undergo an online wellness assessment and temperature check prior to entering the Coliseum and must wear a face mask while inside the Coliseum gates. Those denied credentials will have options for remote coverage via an online media center.”

Good news: According to USC, no Trojan athletes tested positive for the coronavirus among 1,327 tests since the last report, the sixth consecutive week with no positive tests. Impressive to say the least.

Boise man: Former Trojans quarterback Jack Sears is listed as the No. 2 quarterback for Boise State behind returning sophomore starter Hank Bachmeier, who is entrenched as the Broncos main man.

Gone but not forgotten: Disappointing news to learn that Trojans’ defensive lineman Trevor Trout (6-4, 310) is out for the season because of a back issue and his future looks in question.

Fans, cut it out: Following in the footsteps of sports venues, the Trojans are offering fan photo cutouts of themselves for home games at the Coliseum. Here’s the deal: For cutout photos in the stands, a single appearance is $55, a season appearance is $110 for three games (get three games for the price of two).

Fans, cut it out Part 2: Another fan cutout option is to be on the field with your own FULL SIZE cutout. That “field pass” is $330 per game and limited to 50 cutouts per game. All proceeds support Trojans student-athletes.

The prognosticator: Jerry Palm of CBSSports.com believes that if Oregon goes 7-0, the Ducks will be part of the CFP semi-finals. Okay, but what happens if the Trojans go 7-0?

Happy anniversary: This is the 10th season of a Pac-12-team conference.

Kickoff time: The Pac-12 has announced the kickoff time window for the Trojans Friday night, Dec. 4, game in the Coliseum against Washington State. The kickoff will be either 6:30 p.m. or 7:30 p.m. PT, and the game will be televised on FS1. Gee, one hour makes that big a difference?

2022: Dodgers co-owner Todd Boehly, speaking at the Milken Institute Global Conference, says MLB is not likely to fully return to normal until 2022. In fact, in the story in The Times this week, Boehly said that if the Dodgers were able to have a 25% capacity, this would translate into 14,000 seats sold in a 56,000 stadium. If you equate that to USC home football games in the Coliseum (77,500) and figure on a 25% attendance limit in 2021, that would translate to a Coli capacity of 19,375. That’s one way to announce you’ve sold all your season tickets.

In memory: Sad to inform the readership that former Trojans’ football and baseball player, former Saddleback College football and golf coach, and Orange County broadcaster Bill Cunerty, 74, passed away on Thursday from complications of Parkinson’s disease. Having known Bill personally for many years, he was one of the greatest coaches and gentlemen I’ve ever met. He will be greatly missed, and our thoughts go out to his family. Coach, you were the best.

Caller No. 1: Greg, I just heard about Trojans quarterback verbal Jake Garcia transferring again because he was ruled ineligible at Valdosta (Ga.) High. Are you concerned that this kid has been to like five high schools in four years?

Caller No. 1, Jake transferred from Valdosta High in Valdosta, Georgia, to Grayson High in suburban Atlanta. To fully understand the transfer, Jake was ruled ineligible at Valdosta because it was ruled he didn’t make a bonafide move there, according to the Georgia governing body for high school sports. Yes, I am concerned about all the transferring. It makes you wonder what happens if things don’t go exactly right at USC. Will he eventually transfer from Troy, as well?

As you may recall, Jake left California and La Habra (Calif,) High because California football was postponed until the new year due to COVID-19. Jake wanted to play in the fall and felt going out of state was his best option. For the record, besides La Habra High and prior to leaving Cali, Jake also attended Long Beach Poly and Harbor City Narbonne.

Caller No. 2: GK, do you think that fans might get to see a USC home football game in person this short season?

Caller No. 2, there is always a chance it could happen if the state and local authorities allow fans to go to NFL games in L.A. and San Francisco. I’d say follow the NFL, and that may tell you how eventually the four Pac-12 schools in California will go. If fans are finally allowed, it figures it would be either late in the season or for the Pac-12 title game, wherever that’s played.

Caller No. 3: Mr. K, are you sold that the Trojans will finally be a physical team this season after hearing this song and dance before?

Caller No. 3, like many, I am cautiously optimistic. However, I do think that the defense will be more intense and physical because not only are the personalities of the coaches high spirited and intense, but some of the starting players have indicated that things are different and refer to the physicality and intensity as a major difference. My concern would be the physicality on offense – namely the offensive line. Can they control the line of scrimmage?

Caller No. 4: G-Kat, name a current player on offense and defense that you think will be a surprise or will play a factor during the season.

Caller No. 4, on defense I’ll go with sophomore inside linebacker Ralen Goforth, and on offense I am going with offensive guard Liam Jimmons.

Caller No. 5: Katzer, have you started your Holiday shopping?

Caller No. 5, given the world in which we live and the status of getting mail or order deliveries, I decided a month ago to start shopping online, and I’ve been getting a steady stream of “presents” being delivered. I know it’s not quite crunch time, but since I have no plans to visit malls or outlet stores and given the unpredictability of the mail these days, I am taking no chances. I will say that I have had good success with a majority of online purchases in terms of ordering and delivery, although some presents leave me a little nervous when they’re actually going to be delivered.

The final word: I was asked recently if I am excited that USC football is almost upon us. Why wouldn’t I be? After all, how many times can you watch a DVD? However, I must admit I have been enjoying watching the Dodgers playoff run (until Saturday night’s blown game), some college football games, and, yes, an NFL game here and there. Do I wish the USC/ASU game was next Saturday? Of course. BTW, what time does Traveler get up in the morning for the USC/ASU game?