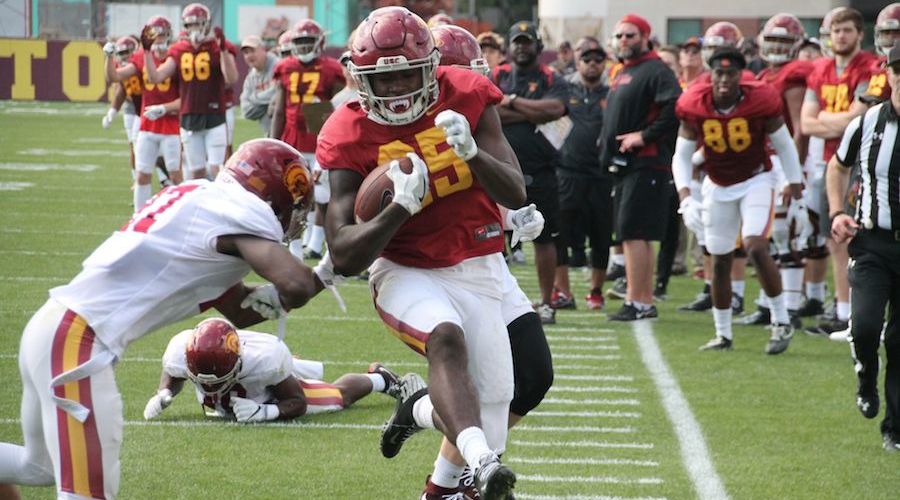 The overview: After watching Saturday morning’s scrimmage, our overall first take is that those that watched the scrimmage may have been somewhat disappointed with the offense yet impressed by the defense. Actually, we were impressed by both units, especially their competitiveness, although the offense did provide three turnovers. However, there was a lot to like on both an individual and position unit basis if you put things into proper perspective for a first spring scrimmage.

Offensively speaking: At this point, sure, the offense might not look like the 2017 Rose Bowl juggernaut, but consider that quarterback Sam Darnold – arguably the best player in college football at its most influential position – divided time with backup competitors Matt Fink and Jack Sears. If Darnold would have been the quarterback for the entire scrimmage, you can bet the Trojans offense would have been moving and scoring touchdowns. That being said, the offensive looks to be making progress in baby steps, but progress nonetheless. Junior tailback Ronald Jones ll (photo above) had a turning-the-corner, eye-opening touchdown moment reminiscent of a Reggie Bush acceleration burst.

Offensively speaking – Part 2: True freshman tailback Vavae Malepeai, who had some outstanding runs on Saturday, looks like an even better prospect than former tailback-fullback Malaefou MacKenzie, and the Trojans passing game – a work in progress – had some impressive moments, despite the fact that two of Sam Darnold’s favorite targets, wide receiver Deontay Burnett and tight end Daniel Imatorbhebhe, didn’t perform on Saturday. Keep that in mind.

Offensively speaking – Part 3: As far as the important backup quarterback role, no question that redshirt quarterback Matt Fink has improved and true freshman quarterback Jack Sears is clearly behind Fink, as one would expect with Sears playing in his first college scrimmage. We liked some of the individual play of the offensive line, especially the execution and renewed enthusiasm of junior offensive left tackle Chuma Edoga. He’s like a new man out there.

Offensively speaking – Part 4: Sophomore right tackle Roy Hemsley is making progress and for the time being, junior Chris Brown is working at left guard in place of the departed Damien Mama. One disconcerting area on Saturday was the amount of penalties by the offensive. Helton pointed out afterward that one of the keys to last season’s famine to feast resurrection was the offense’s ability to cut down on the early season penalties.

IMHO: Way too much is being of the fact that quarterback Sam Darnold has thrown six interceptions this spring, including three this past week. Yeah, he didn’t throw that many last spring or in training camp, but he also had veteran receivers like JuJu Smith-Schuster and Darreus Rogers. Interceptions have various reasons such as wrong routes by inexperienced receivers, tipped passes, and miscommunication. Let’s not build a molehill into a mountain and certainly not in the spring for goodness sake.

Defensively speaking: No question, Saturday’s scrimmage was a splendid day for the defense. As we commented in the WeAreSC post-game scrimmage podcast with Garry Paskwietz and Johnny Curren (http://www.wearesc.com/podcast/2017/03/25/scrimmage-review/ ), it appears here that the 2017 defense will be more physical and feels very knowledgeable in running Clancy Pendergast’s intricate defensive system. FYI, senior OLB Uchenna Nwosu made the hit of the day on TB Ronald Jones ll, and it was a real “head-snapper.”

Defensively speaking – Part 2: There’s quite a battle for Michael Hutchings vacated weakside inside linebacker position. Both sophomore Jordan Iosefa and John Houston Jr. are the lead candidates and both have their positives. The secondary was a highlight for us on Saturday, as coach Ronnie Bradford’s group was like Velcro on coach Tee Martin’s receivers and, boy, the physical play of the secondary led by junior corner Iman “Biggie” Marshall, junior safety Marvel Tell lll, and safety Chris Hawkins was impressive as was the continued play of redshirt freshman safety/nickel back Jamel Cook.

Defensively speaking – Part 3: One of the brightest of bright spots for the defense on Saturday was the play of true freshman nose tackle Marlon Tuipulotu (6-3, 295) who got the starting nod. You’ve heard many times that this man-child is someone special, and all Marlon did on Saturday was reinforce that perception into reality. “Tui” drew praise afterward from Clay Helton for clogging the middle, and the feeling here is that by the time spring ball is over, young No. 51 has a real shot at starting at nose tackle in the foreseeable future. Yeah, senior Kenny Bigelow will be back full strength in August, and there will be continued competition from senior Josh Fatu, but if Tuipulotu keeps it up at worst, he’ll be a regular in the rotation.

Defensively speaking – Part 4: True freshman Marlon Tuipulotu came that close to signing with the Washington Huskies last winter. And speaking of recruiting, we hear that Florida State was irate when redshirt freshman safety/nickel back Jamel Cook, a native Floridian, signed with the Trojans.

Budding bright spot: While he may not play all that much in 2017, keep an eye on true freshman offensive tackle Andrew Vorhees. Watching him in the scrimmage and in coach Neil Callaway’s linemen drills, Andrew certainly doesn’t look (6-6, 290) like a true freshman who should still be in his spring semester at Kingsburg (Calif.) High.

Class act: Normally for practice the media is placed to the left of the Goux Gate entrance, but for Saturday’s scrimmage the scribes and photographers were assigned across the field on the opposite side of the field along the 5-yard line to the end zone. Clay Helton made it a point to apologize for the change of location and explained it was to accommodate the large gathering of former players that had come to watch the proceedings. And, folks, that’s why Helton has the respect of the media.

The comparison: Clay Helton says that wide receiver Velus Jones Jr., who was a focal point during Saturday’s scrimmage offense, reminds him of Percy Harvin, the electrifying college/pro receiver who Pete Carroll heavily recruited when he was the Trojans head mentor.

The comparison – Part 2: Clay Helton says that Velus Jones Jr. is especially dangerous on kickoff returns. The Trojans head coach says, “He doesn’t dance too much. He sees a hole and he hits it.”

Interesting: For those that wonder about a fullback in the USC offense, Trojans junior fullback Reuben Peters got a number of carries in the red zone on Saturday.

Background check: In considering the possible hiring of new running backs coach Deland McCullough, not only did Clay Helton check with current college programs, but he also checked with NFL people as it pertained to McCullough’s credentials. Regarding his new running backs coach, Clay Helton said this week, “We thought we had a diamond in the rough.”

Background check – Part 2: In assessing new running backs coach Deland McCullough, Helton also said, “He’s not a coach that has his hands in his pockets.” The Trojans head coach said he lost a very good coach in Tommie Robinson (LSU) but gained a very good one in McCullough.

To his liking: Clay Helton says that he likes his depth in the secondary; therefore, he was comfortable moving corner Pie Young to wide receiver, some say his natural position.

Tighten up: Clay Helton says he’s excited about is redshirt freshman tight end Cary Angeline, who had a nice catch-and-run down the sideline on Saturday.

Speedster: In commenting on Cary Angeline this week, Helton said, “We didn’t realize when we were recruiting him just how fast he was. He’s sneaky fast.”

Good news: Clay Helton said after Saturday’s scrimage that the annual spring game in the Coliseum on April 15 (noon) will be a “live” scrimmage, meaning that there will be real tackling and not the “thud” tackling, which was on display during last year’s spring game. Helton considers the upcoming spring game as the third and final scrimmage.

Still transferring: Former Trojans offensive lineman Khaliel Rodgers, who originally said he was transferring to Iowa State, has rerouted himself to the University of North Carolina.

Swann speaks: In his recent State of Troy message, USC Athletic Director Lynn Swann said, “The first challenge for Clay Helton is to get everybody over the fact that we went to the Rose Bowl and we won. You have to refocus. That was January, and we are now moving forward.”
Swann speaks – Part 2: “The goal is to win the Pac-12 championship. You have to do that first, so that is what we want to get accomplished. We are trying to build the depth with our younger players to get to the level of the playoff teams like Clemson, Alabama and Ohio State.”

Swann speaks – Part 3: “We need to be able to rotate players in without losing a level of performance and play. That’s what we are striving to do, so that our backup players are not backups but the next guy ready to go in and get the job done.”

NFL: Many observers believe that NFL really stands for “Not for long.” Well, former Trojans All-America linebacker Rey Maualuga, now 30-years-old, has been released by the Cincinnati Bengals. Cincy’s head coach Marvin Lewis said he just wanted to go to a younger linebacker setup. The message here is that nobody in the NFL is safe…unless your name currently is Tom Brady.

Papa Bear: Former Trojans quarterback Mark Sanchez has signed a one-year contract with the Chicago Bears. Give Sanchez credit, he doesn’t shy away from big city markets and the pressure that comes with it, or have you forgotten Sanchez and the New York Jets?

The last word: It was sad to learn of the passing of Clay Matthews Sr., whose many sons and grandsons were an instrumental part of Trojans history and lore. Like my colleagues at WeAreSC, we also send our thoughts and prayers to former Trojans All-America Clay Jr. and NFL Hall of Famer Bruce, and grandsons Clay lll (Green Bay Packers), Kyle, and one of our favorites, former WeAreSC contributor Brian Matthews. And by the way, all the Matthews were and remain class acts at the highest level.