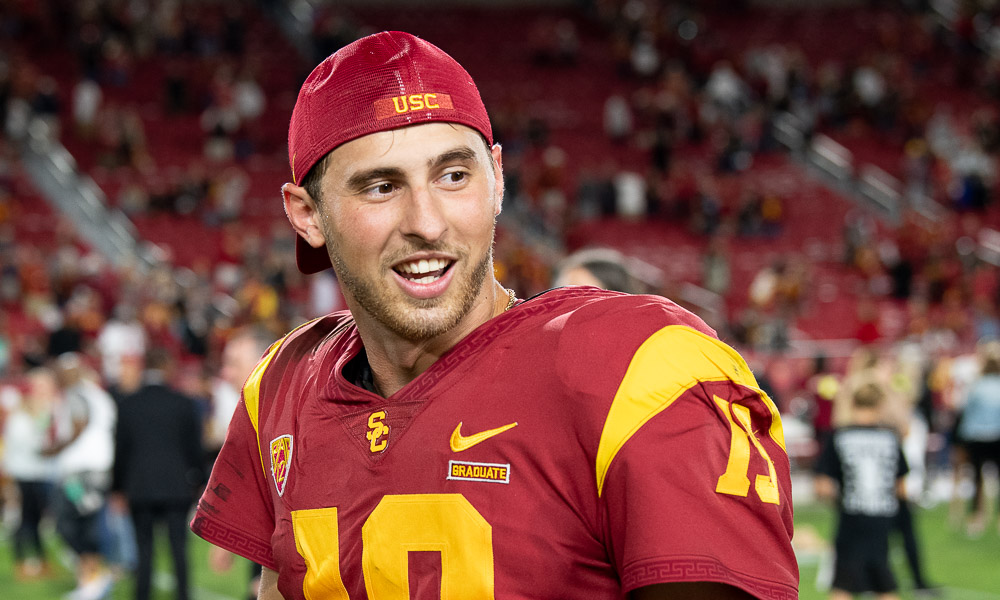 Taking it to the Matt: As you may be aware by now, Trojans “backup” quarterback Matt Fink has elected to forego a 6th season in Cardinal and Gold and take his upcoming spring master’s degree in communication management into the work force. For his gridiron service, all Trojans should give Matt a virtual Coliseum “Heritage Tunnel” standing ovation for not only a job well done in a difficult role but a true example of a player who gave it up for the team, waited his turn to serve, and when called upon rose to the occasion. Just ask the 2019 nationally ranked Utah Utes.

Taking it to the Matt – Part 2: Coming out of Glendora (Calif.) High as a dual-threat quarterback, Fink was not considered an elite national name like a Carson Palmer or Matt Leinart. In fact, some USC followers upon his signing said, “Who he?” Matt, however, was named on a number of respected regional and national publications and could have started at a lot of universities, but like many locals, couldn’t resist the thought of getting a shot with the storied Trojans while attaining a USC degree.

It wasn’t overly surprising when Matt got to Troy, he seemed buried in the depth chart. Yet, in 2017, he gave a glimpse into his athletic ability during scrubini time when late in the final quarter against Oregon State in the Coli, he ripped off an eyebrow raising 51-yard TD sprint.

Taking it to the Matt – Part 3: For Matt Fink, his one shining national moment came in the 2019 Coliseum home game against nationally ranked Utah when Trojans’ true freshman starter Kedon Slovis was knocked out of the game in the opening series with a concussion. All Fink – once the Trojans’ No. 3 signal caller – did was come out of the USC bullpen to upset the No. 10 Utes by throwing for 351 yards and three touchdowns in leading the Men of Troy to a 30-23 upset victory.

Taking it to the Matt – Part 4: Like many Trojans before him, Matt Fink will be remembered for his one huge shining moment just like another former USC backup QB, one John Fox, who in 1999 guided the Trojans to a stunning victory performance over UCLA, 17-7, in the Coliseum. Fox, playing for starter Carson Palmer who had a broken collarbone, was asked to snap a UCLA eight-game winning streak over the Cardinal and Gold. Fox proceeded to fire two touchdown passes (17-of-34 for 216 yards and no interceptions) to become a Trojans trivia hero for life. In case you’re wondering, John’s Aunt Rebecca informs us that the former cardinal and gold QB went on to become a Riverside elementary school teacher, was later elevated to a vice-principal, and now conducts himself as an Inland Empire district office employee.

Taking it to the Matt – Part 5: So, with Matt Fink apparently heading into the sunset – Clay Helton says he can come back if he changes his mind – all 2021 eyes turn not to junior starter and All-Pac-12 first team quarterback Kedon Slovis but to the upcoming spring competition for Kedon’s backup – the prime candidates being true freshmen Jaxson Dart and Miller Moss and former Vanderbilt grad transfer Mo Hasan.

Taking it to the Matt – Part 6: Given the assortment of Kedon Slovis injuries, the thought of either one of the two true freshmen coming in as a replacement is not exactly a comforting feeling, especially if you’re Clay Helton and your job is on the line. Not that Dart or Moss don’t have talent because they do, but they are completely inexperienced if given the call and Hasan hasn’t taken a snap since 2019.

Offensive line intrigue: First-year offensive line coach Clay McGuire caught our attention as a guest on a recent Trojans Live radio show. With high scrutiny shining upon his position group, McGuire informed his listening audience, “I think we’ve been able to tweak some things in the off-season and implement some things that we’ve done in the past, and like I said, I think it’s the ultimate developmental position and if you’re not developing, you’re not getting any better.”

Offensive line intrigue – Part 2: Coach McGuire will have to forgive those skeptics from the media and the Trojans fan base, both of whom have heard such optimistic quick fixes before from the parade of past offensive line coaches. And wouldn’t y’all like to know just what those proverbial “tweaks” are as well as the meaning of “implementing some things that we’ve done in the past.” It should be interesting and a great mystery unraveled.

Offensive line intrigue – Part 3: Regarding the Trojans, to be kind, weak running attack the past couple of seasons, McGuire optimistically said, “When we can get into the right plays at the right time, we should be very efficient in the run game.” I think the words “very efficient” will either come back either to praise or to haunt the Trojans’ new O-line coach throughout the course of the 2021 season.

The new tight end: Perhaps you’ve noticed that since the Trojans don’t use the traditional tight end (is there such a thing?), players that were once considered tight ends are now considered big wide receivers. When recruiting the new-age USC tight end, coaches point to the results of Drake London, who has the size of a sleek tight end while performing as an exceptional wide receiver.

Save the celebration date: On May 2, the Trojans – no thanks to COVID – will finally be able to salute retiring band director legend Dr. Arthur C. Bartner on his decades of service. Called “The Golden Legacy – a virtual gala celebrating 50 years of Dr. Arthur C. Bartner and The Spirit of Troy,” the virtual evening will feature a retrospective of Dr. Bartner’s five decades of leadership and a look forward into the future of the program.  The virtual Golden Legacy gala will feature Trojan legends, special guest stars, and performances by the Trojan Marching Band. More information to follow.

Did you know: That incoming freshman quarterback Miller Moss’s mother, Emily, was a professor in USC’s School of Architecture? How’s that for a recruiting advantage.

Did you know Part 2: That incoming Alabama defensive tackle transfer Ishmael Sopsher played at Amite High (Amite, Louisiana), which won the 2018 LHSAA Class 2A State Championship. Ishmael was selected to the All-State team each of his four seasons at Amite.

Remembering 1965: Many of you weren’t around at the time, but the 1965 USC/UCLA game was a classic if you’re a UCLA fan and a nightmare if you were a Trojans supporter. It was announced this week that one of the key members of that Bruins shocking late comeback victory, wide receiver Dick Witcher, has passed away at 76. It’s probably the worst USC football loss in the rivalry that I have witnessed in person, just devastating. Beban to Witcher and then moments later to receiver Kurt Altenberg is ingrained into my head forever.

Remembering 1965 – Part 2: Going into the 1965 UCLA-USC rivalry football game, the conference championship and 1966 Rose Bowl were on the line. The Trojans were ranked No. 6 and led by Heisman Trophy winning tailback Mike Garrett. Troy led 16–6 with just four minutes left to play until UCLA, ranked No. 7, completed a 34-yard touchdown pass from quarterback Gary Beban, an eventual 1967 Heisman Trophy winner, to Witcher.

Remembering 1965 – Part 4: After the loss, Trojans legendary coach John McKay said, “This was the toughest defeat I’ve had to take by about 700 miles.”

Caller No. 1: Gregger, were you shocked over Matt Fink’s decision not to play in 2021 and get ready for his career?

Caller No. 1, not at all after I learned Matt would be receiving his master’s degree at the completion of this current spring semester. Look, he knows he’s not going to the NFL, and that he had served his football duty at Troy. No need to risk injury and delay the inevitable of getting a real job. I just wish more players were as mature and realistic about their futures as Matt.

Caller No. 2: Coach, how do you think Talanoa Hufanga will do in the upcoming NFL draft?

Caller No. 2, that’s really a good question. In terms of athleticism, determination, work ethic, and dedication, Tal’s resume speaks for itself. However, he has had a series of injuries during his USC career, which has to be a potential red flag as a high draft pick. However, we’ll see with the NFL draft, which can be anything but predictable.

Caller No. 3: M-Kat, do you remember new USC defensive quality control analyst C.J. Ah You with the Rams?

Caller No. 3, for those not familiar with Ah You, C.J. is the former D-line coach at Vanderbilt. He started his coaching assent as a quality control coach at Oklahoma before accepting the Vanderbilt opportunity. As a player, Ah You played defensive end for the Sooners. As for the Rams, he played four seasons with the St. Louis Rams beginning in 2007, recording a Rams’ career 41 tackles and six sacks.

Caller No. 4, you hear all sorts of rumors of declining season ticket sales, but that could as much to do with COVID as it does in regard to an anti-Clay Helton renewal protest. You could argue that it was actually helpful for Helton that there were no fans last season in the Coliseum stands when the Trojans lost to Oregon in the Pac-12 Championship Game.

Caller No. 5: Homeboy, are you into the mountains, desert, and/or the beach?

Caller No. 5, okay, “homie”, if you insist. I don’t really care for the mountains or hiking for that matter. I really don’t like the desert because of the heat, and I find it boring unless its Las Vegas. As for the third option, I like the beach best at night. My favorite beach spot is relaxing on a lounge chair on Maui (Kaanapali side) overlooking Lanai/Molokai. At night during the summer, it’s like an outdoor planetarium. Just stunning and romantic to say the least.

The last word: Speaking of the last word, still no word on who – if anybody – will be able to attend spring practice, which begins Monday, March 29.