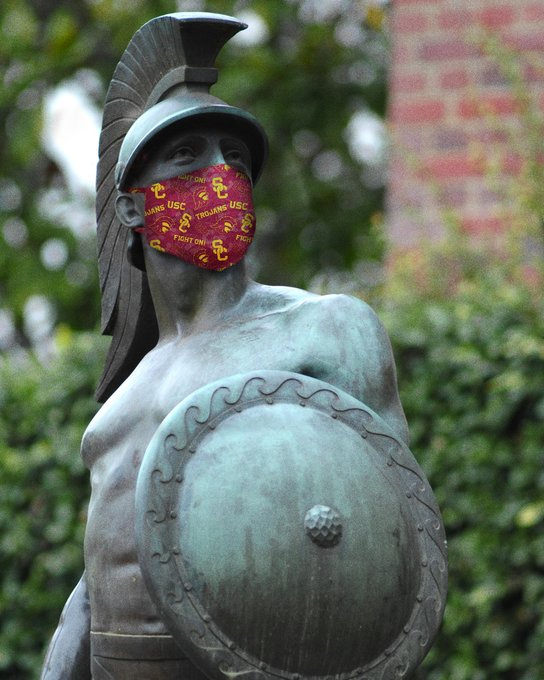 The text: Even Tommy Trojan (photo above) is having to take precautionary measures during these trying times, so it was intriguing recently when an old chum from my Alhambra High days texted me and wrote, “Are you surprised that our (USC) recruiting is really picking up?” It was a captivating question considering the coronavirus and the indefinite stay-at-home mandate that have become such a prominent role in all our lives.

The text response: In response to my buddy’s legitimate question, I first responded by texting back, “No, because right now focus is not on Clay Helton, and there is recruiting energy and general optimism from the coaching additions.” With Helton temporarily outside the crosshairs of the USC fan base, mounting pressure from the Holiday Bowl loss and no spring practice have also become part of the rear-view mirror. And despite the fear and uncertainty of the nation’s future, a bit of much-needed positive cardinal and gold news has surfaced with the recent success in Trojans football recruiting. The new coaches are tremendously enthusiastic, aggressive, coordinated, and motivated to get things turned around with the roster. The coaching additions have – for the moment – largely overshadowed the Helton factor and seized the moment in a team effort to present the program as a reinvented program. With the 2020 college season in uncharted territory, the Trojans are undefeated and that allows some much-needed image rehabilitation. For the most part, Helton has kept a low profile other than an occasional video public service message and a short video on what the coach accomplishes during a typical routine in his home.


The text response – Part 2: I further added in my text response to my old high school buddy that “I expect it (positive recruiting) to continue until games are played – which is questionable at best.” As strange as it may seem, Trojans’ recruiting might be in a major upswing by not being on the field. Don’t get me wrong, I wanted spring practice and a guaranteed 2020 season, but without a lot of scrutiny, there has been little to no controversy or debate regarding the USC football program. If there are no September games played at a schedule minimum, it means that there will be no potential bubble bursting if the Trojans played Alabama and got manhandled. However, if the Trojans do play Alabama in the Advocare Classic and it isn’t a good outcome, all the current muzzled anger and frustration may flow like a giant flood from a broken dam.

The text response – Part 3: I concluded my texting to my fellow “Moor” by saying , “I also believe locally that recruits – thanks to the coronavirus – don’t want to stray too far from home, and you can bet in the current situation, parents want their kids to stay close to home.” So how does that account for the current out-of-state commitments? Actually, it’s no different than normal times. It’s a long time from now to next December to actually put your name on that letter of intent, especially if a season is played.

The text response – Part 4: While the current USC recruiting results are looking upward and appear to be going in the right direction, let’s not forget that the standards and bar of excellence is not nor should it be the same as a Cal or ASU. USC is a storied program and needs to recruit like one. Trojans fans are hopeful the current spring recruiting trend will eventually translate  into a December signing period celebration.

The survey: Recently The Athletic asked its USC subscribers a wide-ranging 18-question fan survey. The survey had 400 responses and the results were enlightening. The first question: How would you rate Clay Helton’s performance so far as head coach? (1: Poor, 5: Excellent)

Some would call the above result a surprise given the circumstances of the past two seasons.

The survey – Part 2: Another question from The Athletic questionnaire was: How would you rate your confidence in Clay Helton’s leadership of the program? (1: Not confident at all; 5: Extremely confident)

There was no surprise with this answer in the level of confidence fans had in Clay Helton’s leadership.

The return: Trojans linebacker Tayler Katoa, who spent the last two years on a Mormon mission in Virginia, told the LA Times he was well aware of Clay Helton’s hot seat when he was getting close to the end of his mission. Tayler said, “(Clay Helton) being on the hot seat, that brought me some anxiety. If he wasn’t there, there may have to be a change of plans. He was the one in my corner through the mission. I said a lot of prayers.”

The draft: Obviously, the upcoming NFL draft is not going to be the traditional fan extravaganza and New Year’s Eve party atmosphere. Scheduled to originally commence from Las Vegas, but because of the coronavirus, this month draft will have a virtual central NFL headquarters, and the teams will have their draft “office” in the home of each general manager. The opening round will still take place on Thursday, April 23, and conclude on Saturday, April 25. The start of the draft will be carried on ESPN.

The Jackson: On the NFL Network, some of the analysts have Trojans former All-Pac-12 left tackle Austin Jackson selected in the late first round by Pete Carroll’s Seattle Seahawks.

The Pittman: Some NFL Network smart guys say they expect Trojans All-Pac-12 wide receiver Michael Pittman to be selected in the second round. They say that if the draft didn’t have such quantity of quality receivers, Pitt might have been able to sneak into the first round.

Getting louder: Those rumors of former Trojans All-America linebacker Chris Claiborne being hired in some capacity by his alma mater have grown louder.

Farmer John: Kudos to meat producer Farmer John for their donation of 77,500 (Coliseum seating capacity) meals to the less fortunate as part of the USC Good Food Challenge.

The red volunteers: This Tuesday, April 14, USC Athletics is partnering with the American Red Cross to host a blood drive at the Galen Center to help maintain a stable blood supply during the coronavirus outbreak. The blood drive, which will run from 10 a.m. to 4 p.m., is a sellout, according to Trojans’ athletic director Mike Bohn. Free parking for those with confirmed donation appointments is available in Lot U on Flower Street on the southeast side of the Galen Center (accessible off Flower Street just south of the arena).

Refund: There was a recent story in the Times regarding the Dodgers and Angels and the lack of refunding of season tickets. According to the story, MLB has given guidelines on how the season tickets holders situation is to be handled. As of now, there are no refunds, which is especially distressing for those folks that need money now to survive. It may also come to a point that Trojans season ticket holder refunds may come into play if there is no season or a partial season.

Caller No. 1: Mr. Katz, are you surprised with some of the comments made by coaches like Clemson’s Dabo Swinney and Oklahoma State’s Mike Gundy about still having a college football season starting on time despite the coronavirus? No, but it points to the absurdity of coaches making millions of dollars who are speaking with their hearts rather than their heads. At last check, neither is a medical professional. For coaches, players and fans, they need to ask this question: Is putting your life on the line for 12.5 ounces of air, which is what it takes to inflate a football, worth it?

Caller No. 2: GK, if the college football schedule is moved back until the middle of winter, do you think that it could coexist with the college basketball season? Well, if the doctors say it would be safe to play, I guess it wouldn’t be a major problem, although for much of the country dealing with the cold and snow it wouldn’t exactly fire up fans to sit in open-air stadiums to watch it. Okay, maybe fans outside of the West Coast would be more receptive to winter football.

Caller No. 3: Katz, what did you think of the idea that if there’s no college football, ESPN wanted to move its No. 1 college broadcast team of Chris Fowler and Kirk Herbstreit to the NFL Monday Night Game of the Week? First, Herbstreit has apparently nixed the idea because all he wants to do is call college games. That being said, I realize that obviously the NFL doesn’t have some of the same restraints as college football student-athletes. I could, however, see an attempt by the NFL to play in empty stadiums just to stay visible, but it seems to me the risks far outsize the benefits.

Caller No. 4: Sir, how do you think Clay Helton is handling the current health situation? I think that Gentleman Clay is doing and saying the right things when asked about the situation. He knows that if regular students are not allowed back on campus, it’s probable that his players, who are college students, won’t be back either. And let’s not forget, this situation affects all the sports at USC.

Caller No. 5: Coach, can you recommend a book to read about USC football? Sure, a number of books come to mind, but I don’t think you’ll be able to get it from a normal bookstore, which is probably closed at this present time. The USC football books I would recommend in order of quality would be as follows: (1) Fight On!: The colorful story of USC football by Loel Schrader and Steve Bisheff; (2) The Official and Exclusive Illustrated History of USC Trojans Football by Skybox; (3) Always Compete: An inside look at Pete Carroll and the USC football juggernaut by Steve Bisheff; (4) Conquest by David Wharton and Gary Klein; (5) Miracle Moments in USC Trojans Football History by Dan Weber. And as an added bonus recommendation if available: McKay, A Coach’s Story by Jim Perry.

The final word: A lot has been made about USC football scheduling. In your humble opinion, which opponent in the modern era (1960s – 2020) has been the most unattractive adversary either home or away, win or lose?